WE ARE entering what is widely referred to as the 4th Industrial Revolution, an era where the development of new materials, breakthroughs in the field of genetic engineering and digital transformation are increasingly blurring the lines between the physical, biological and digital worlds.

With multiple industries being disrupted, those without the relevant skills for the future workplace stand to be at risk. The bad news is that women are likely to be disproportionately negatively impacted, according to a World Economic Forum study. One key reason is because that they are relatively under-represented when it comes to jobs which are expected to have the most growth in the next five years in STEM (science, technology, engineering, mathematical) professions.

Diversity and inclusion is widely recognised as important competitive strengths. This also means there is tremendous opportunity for women to play a central role in driving innovation and progress.

According to a list of the Most Promising Jobs of 2017 published by LinkedIn, the top 20 occupations require STEM skills. Despite the opportunities, though, there remains a persistent gender gap. Globally, Unesco estimates that only about three in 10 researchers in science, technology and innovation are female while LinkedIn estimated that women account for only about two in 10 tech jobs. What could be deterring more girls and young women from entering a field that offers the skills and knowledge that could change the world? Here are four common misperceptions:

In reality, STEM is an interdisciplinary approach towards educating students in four specific disciplines – science, technology, engineering and mathematics. Rather than teach them as separate subjects, STEM integrates them into a cohesive learning model based on real-world applications.

Increasingly considered a fundamental skill for a basic education and a job, STEM also opens doors for young women to higher education and exciting jobs. A path in STEM could pave the way to a wide spectrum of degree fields including Computer Science, Artificial Intelligence (AI), Solar Energy Technology and Robotics Technology.

On a more fundamental level, learning STEM subjects provides critical thinking and problem-solving skills that will be needed across all jobs of the future.

Myth #2: STEM skills are only useful for STEM jobs.

In a technology-driven world, a vast majority of jobs require STEM skills in one form or another. Globally, companies and organisations are also evolving the way they operate and do business. Part of that evolution involves recruiting key talent – men and women with the mental agility to help businesses succeed. 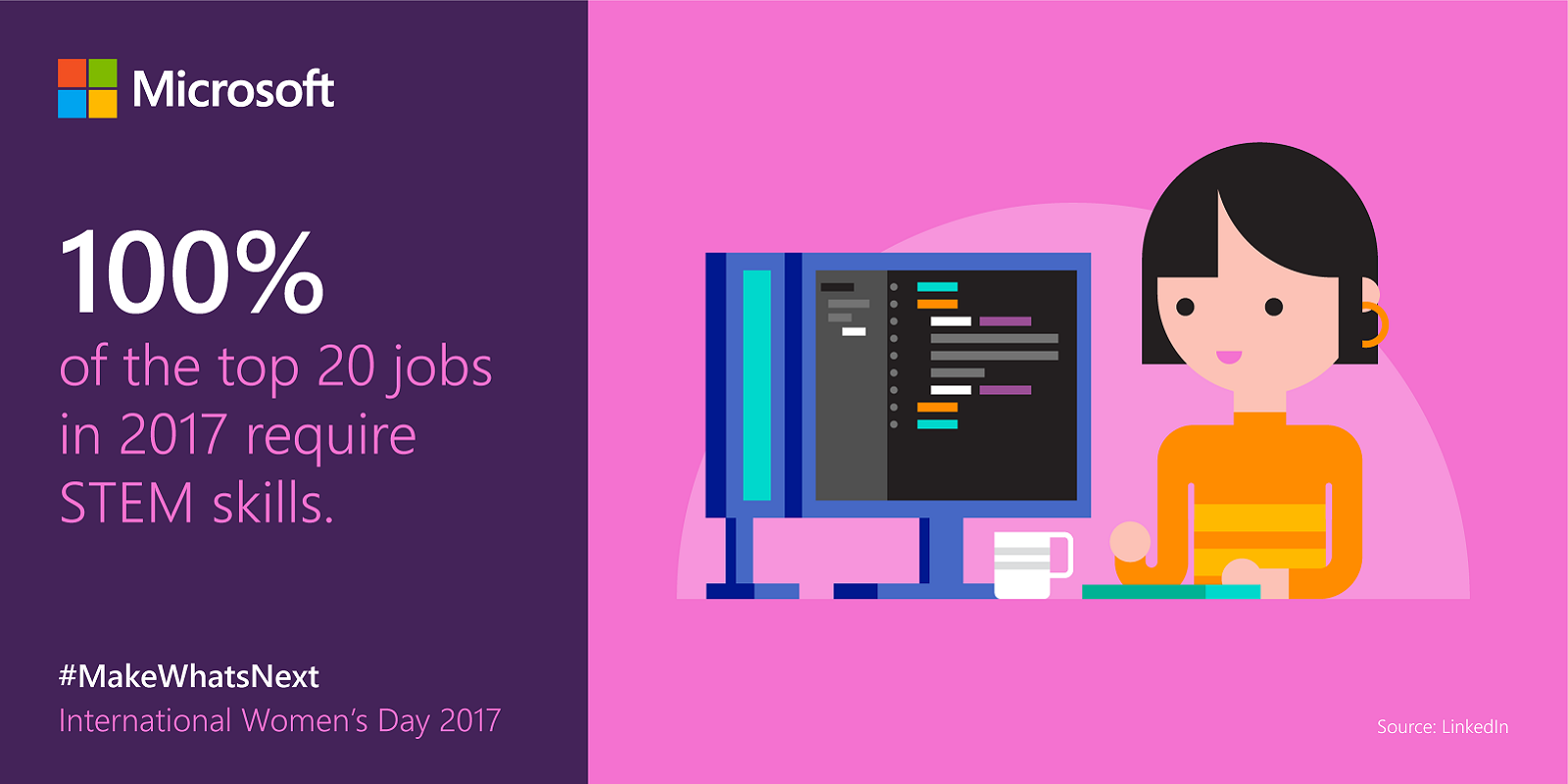 In a Mastercard survey of approximately 1,500 girls from across the Asia Pacific region between 12 and 19 years of age, 84% indicated creativity as a desirable trait but only 43% associated girls in STEM with this quality.

In reality, creativity and problem-solving skills are integral to a successful career in STEM. Dona Sarkar is an excellent example.  The newly appointed leader of the Windows Insider Program, Microsoft’s global beta program involving millions of members who receive and give feedback on early builds of Windows, Sarkar has come a long way since starting as a software engineer working on the Windows team more than a decade ago.

For her, coming up with creative solutions that enrich and improve people’s lives is central to her work and she believes that technology or, more specifically, operating systems provide the means to create anything. Sarkar is also the one who worked with her team to create Microsoft HoloLens, the first self-contained, holographic computer.

True to form, she wears multiple creative hats even in her personal life where she is a published author of four books, a fashion blogger and an aspiring fashion designer. Whether she is coding or sketching designs by hand, creativity is an intrinsic part of everything she does. Myth #4: Men are more likely to succeed in STEM fields than women.

Unfortunately, gender stereotypes exist and perpetuate even in the modern world today. With access to the right technology, education and opportunities, women have the power to challenge perception and chart new paths into the future.

Across a span of almost 200 years, these 10 inspiring women the likes of Ada Lovelace and Grace Hopper helped to transform the world we live in by pioneering technologies that many of us find hard to live without today, proving that women are just as capable of achieving great success in STEM fields.

There is no better time than on International Women’s Day to celebrate diversity and the incredible potential of women and girls to make an exponential impact in the world. Through initiatives that provide support and opportunities in computer science and technology, we hope to inspire girls with courage and a huge dose of creativity to go beyond prescribed boundaries to #MakeWhatsNext, today. Dr Daiana Beitler is the Philanthropies Lead for Microsoft Asia