AUTODESK Inc caused quite a stir in May when it announced the launch of Spark, an open software platform for 3D printing, as well as a 3D printer.

The Spark platform is intended to connect digital information to 3D printers in a new and streamlined way, so that prints can be optimised without trial and error, and also so that a wider range of materials can be used.

It will be open and freely licensed to hardware manufacturers and others who are interested. In a blog post, chief executive officer Carl Bass stated that the world is just beginning to realise the potential of additive manufacturing.

“With Spark, we hope to make it possible for many more people to incorporate 3D printing into their design and manufacturing process,” he added.

“Together, these will provide the building blocks that product designers, hardware manufacturers, software developers and materials scientists can use to continue to explore the limits of 3D printing technology,” Bass said.

He also said that the design of the printer will be made publicly available to allow for further development and experimentation.

“The printer will be able to use a broad range of materials, made by us and by others, and we look forward to lots of exploration into new materials,” he added.

Autodesk will be working with hardware manufacturers to integrate the Spark platform with current and future 3D printers. “It started about five years ago, when the intellectual property for the technology opened up and everyone jumped into it,” he said.

To illustrate the widespread recognition of the technology’s potential, Lee pointed to Singapore, where in March 2013, the Government announced that it will be investing US$500 million over five years to boost the country's skills in advanced manufacturing, including in the rapidly emerging 3D printing industry.

Announced in its national Budget 2013, this funding is part of the Singapore Government's Future of Manufacturing (FoM) programme aimed at getting the island-republic's manufacturing firms to embrace disruptive technologies such as 3D printing and robotics, as well as new business models such as mass customisation.

The US$500-million funding will be used to upgrade skills among workers and engineers, as well as to explore "the potential of building a new 3D printing industry ecosystem."

The country’s Agency for Science, Technology and Research (A*Star) also launched the Industrial Additive Manufacturing (AM) programme in November 2013.

The S$15-million (US$11.9-million) initiative is aimed at developing a number of critical technologies to grow an internationally competitive AM industry in support of the manufacturing sector, particularly the aerospace, automotive, oil & gas, marine and precision engineering industries.

A*Star said that the size of the AM market is projected to grow five-fold from US$2.2 billion in 2012 to an estimated US$10.8 billion in 2021, led by automotive, medical and aerospace applications.

There’s also a startup based in Singapore, Pirate 3DP Pte Ltd, whose US$347 3D printer targeted at consumers ended up raising US$1.4 million from 3,520 people via crowdfunding site Kickstarter.

Stratasys Ltd, a 3D printing innovator, has already made formal moves into the Asian market since last year, seeing the region as a strategic component of its business; and in South-East Asia, Malaysia as a strategic hub.

It is against this backdrop of increasing interest and investment that Autodesk intends to make its mark with Spark, although Lee is quick to stress that the company has absolutely no interest in becoming a hardware company.

“When the news about Spark broke, I did get a phone call from an industry friend asking me point-blank if this meant Autodesk was making a hardware play. We’re not!

“We don’t intend to be a hardware company, for sure. The 3D printer we’re coming out with is meant to be used as a reference point and we’re making it available to everyone to spur and enable others who want to develop their own 3D printing technologies.

“The mission with this is to make 3D printing more standardised, as right now there are compatibility issues for different file formats with different printers. By standardising the file technology, different 3D printers can seamlessly talk to each other and create an even bigger evolution in the scene,” he said.

Lee said that the open source move was in line with Autodesk’s longstanding mission to democratise technology and enable access to all.

Autodesk’s own contribution, via its core software play, is enabling the simulation of the entire 3D printing process. A CIO Today report noted that in 2011, Autodesk began giving away free consumer software for designing and making 3D objects in a lower-key effort compared with Spark.

“Right now, you don’t know how it’ll look until it’s actually printed out. You can’t really visualise it, or know how it will print. By simulating it, manufacturers will be able to optimise cycle time and ensure good finishing of their products,” claimed Lee.

It is still early days for Spark, with both platform and printer only expected to hit Asia at the end of the year.

The Wall Street Journal reported that the printer itself would most likely be priced at about US$5,000, but which open source licensing model the company will use has not been determined.

Lee has yet to check out the hardware himself, but is understandably quite excited about it.

“If you’ve seen the picture, it’s cosmetically quite pleasing. Looks like a high-end coffee machine,” he quipped.

3D printing to cost US$100bil worth of IP losses: Gartner 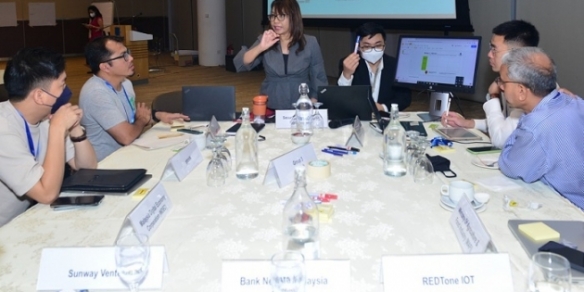