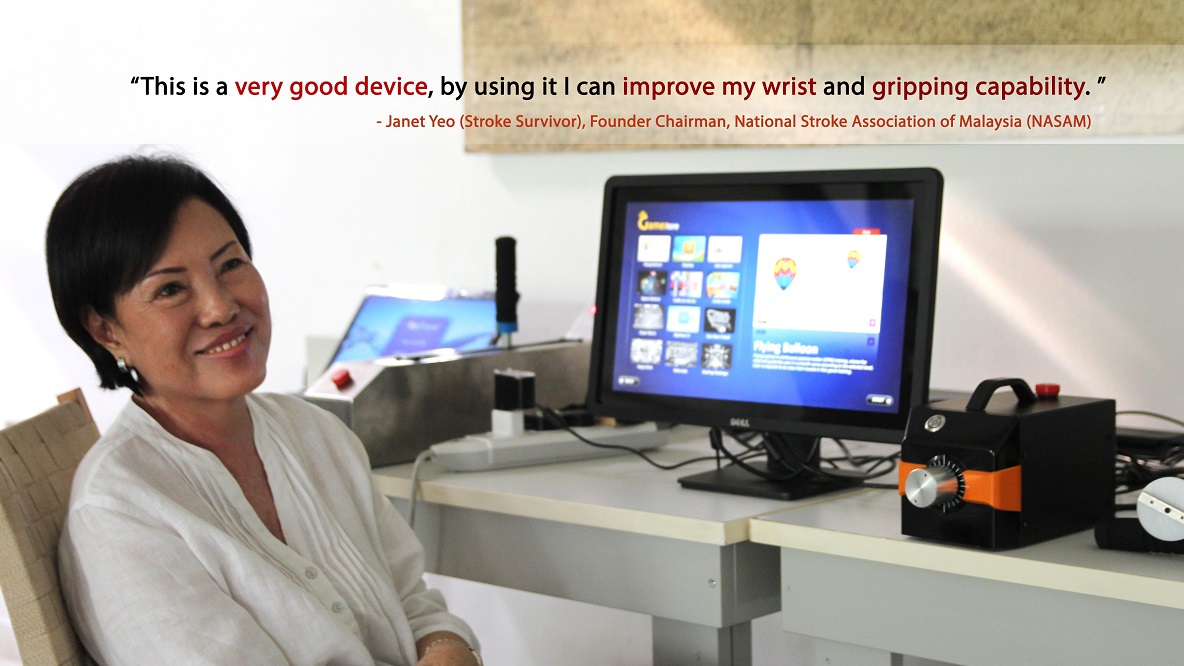 MALAYSIAN startup TechCare Innovation Sdn Bhd hopes to take its rehabilitation robotics system from research to the marketplace with a pledge drive on pitchIN, the domestic equivalent of Kickstarter.

The company’s Compact Rehabilitation Robot (CR2) is a series of robotics systems developed for rehabilitation training, or essentially as physiotherapy aids. TechCare itself is a spinoff company from UTM (Universiti Teknologi Malaysia), where the system is being developed.

Its latest iteration, CR2-Haptic, is aimed at those who have suffered strokes, traumatic brain injuries or other neurological disorders resulting in hand and arm impairment. It is designed to train forearm, wrist and basic ‘activity of daily living’ (ADL) movements, according to TechCare Innovation.

It is one of 20 projects launched on the pitchIN crowdfunding platform as part of the official launch of the Malaysian Global Innovation Centre (MaGIC) in late April, where even Malaysian Prime Minister Najib Razak (pic, far right) had a go at the system.

The company has already met its first crowdfunding level of RM5,000, having raised more RM12,000, that will allow it to donate the software portion – a Microsoft Kinect-based game – to a non-profit rehabilitation centre operated by the National Stroke Association of Malaysia (Nasam).

But TechCare Innovation is ultimately aiming to get RM35,000 that would allow it to fully develop the CR2-Haptic robotics system and give it to Nasam, and to also commercialise it and bring it to market. [RM1 = US$0.31]

“For the past three years, we have been focusing on the research and development of the rehabilitation robot,” said Khor Kang Xiang, the core mechanical and electronics designer at TechCare Innovation.

“However, we know that even with the best research outcome at the university, if we can’t deliver CR2-Haptic to market for patients to use it, it makes no difference because they would not be able benefit from the outcome at the end of the day.

“Therefore, we hope to make this change and bring the research outcome to [more] patients by commercialising the product,” he told Digital News Asia (DNA) via email.

[UPDATE: CR2 was ultimately the winner of MaGIC PitchIN challenge, collecting up to RM27,599 from 100 contributors. The company said it will soon deliver a CR2-Motion system to Nasam.]

CR2-Haptic is a portable and compact rehabilitation robot which can be used to train patients’ muscle functions while they play games. It allows patients to train at home by integrating tele-monitoring technology that enables therapists to monitor the patients' progress via the Internet.

This feature also allows therapists and family members to easily analyse and review the progress of the patient, according to TechCare Innovation. Using robotics in stroke and similar rehabilitation is not new, with several other systems such as the In-Motion Arm and Reo-Go already in market, but which the Malaysian company says are too expensive and bulky for home use.

The idea behind CR2 came to Dr Yeong Che Fai (pic), currently a senior lecturer at UTM and lead researcher and marketing strategist at TechCare Innovation, when pursuing his PhD at the Imperial College in the United Kingdom back in 2006-2010.

“I basically built a rehab robot which was tested in a UK hospital. The feedback was positive and encouraging from both physiotherapists and patients, but still had lots of room for improvement.

“Thus, when I came back in 2010, I started research here, but focusing more on delivering a final product for patient use,” he told DNA.

According to TechCare Innovation, one in six people in the world have a chance of getting a stroke in their lifetime. In Malaysia, 52,000 people suffer from a stroke every year, it said, citing reports in English dailies The Star and The New Straits Times.

“I had always been under the impression that stroke only happens among the elderly, until a visit to one of the rehab centres in Malaysia,” said Khor.

“During my visit (to a Nasam centre in the state of Melaka), I saw teenagers as young as me who had suffered from a stroke, and I could feel their pain … there was one young man who was actually dragging his leg along the way when he walked.

“I only then realised that strokes could affect anyone of any age, at any time,” he added.

As he went to the field to research the problem, he came across many patients in need of rehabilitation or physiotherapy.

“However, due to the large number of patients and lack of therapists, most of the time, patients don’t have the chance to get enough rehabilitation training for a proper recovery.

“Generally, they need to be discharged once they are mobile, as general hospitals need to handle more serious patients,” he said.

Then Khor met Dr Yeong, who already had experience in the field of rehabilitation robotics, and realised he wanted to use his skills to develop something that could help the stroke community.

“So, that's how I started to get involved with the team. From that, we started to build a rehabilitation robot with an aim to commercialising it one day so that patients can use it to improve their recovery,” Khor added. The CR2 idea also saw further validation in the annual student technology challenge organised by Microsoft Corp, the Imagine Cup. A team Dr Yeong supervised and led by one of his students, Yong Bang Xiang, came in first in the Malaysian edition of the global competition.

“It’s wonderful to see them extend their ideas to build a compact rehabilitation robot, and very exciting that they’ve managed to raise over RM12,000 for it,” he added.

Dinesh also noted that another group of students from UTM, Team Mini-Heartcatcher, which won the Innovation Category of Imagine Cup 2014 with a portable device and a Windows Phone 8 app to capture electrocardiographs (ECGs) from cardiovascular patients, also succeeded in raising over RM5,000 from pitchinIN as well.

“We’re proud that both these teams have progressed towards market validation of their ideas and their apps, and are well on the way towards fulfilling their innovative dreams,” he said.

“We’ll certainly be involved in assisting both teams through our developer programmes and hands-on-labs, as well as offer them startup benefits through our BizSpark initiative and even assist them through the acceleration programmes we have partnered with,” he added.

TechCare Innovation’s Dr Yeong said that the Imagine Cup experience was very valuable to the team.

“During the three-day competition, the team needed to pitch to panels every day, where they got feedback for improvement. So my students continued to improve the game.

“More importantly, Microsoft was there to assist technically. Thus, my students gained a great deal of technical knowledge during that short, three-day period,” Dr Yeong added.

Another initiative that has helped TechCare Innovation tremendously is the second Coach and Grow Programme (CGP2) organised by Cradle Fund Sdn Bhd, a Ministry of Finance agency, and run by Proficeo Consultants.

“The experience we’re getting from CGP2 is tremendous. We managed to learn a lot of business concepts – most importantly, how to execute them in practice within our startup,” said Dr Yeong.

“We are also very grateful to have experienced entrepreneurs, venture capitalists and angel investors guiding us through the workshops, as well as for the valuable face-to-face coaching sessions.

“CGP2 has made a really big impact on our commercialisation journey, and we hope more entrepreneurs can benefit from this programme in the future,” he added.

To pitch in at TechCare Innovation’s crowdfunding drive, go here. For more information on CR2-Haptic, check out the official website or Facebook page, or click on the video below.

Tomorrow: Technical and commercialisation challenges, and what’s next for TechCare Innovation