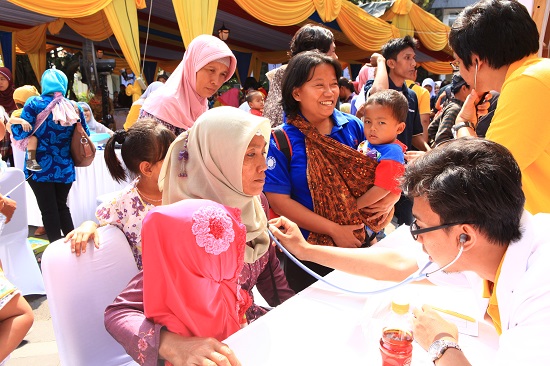 QATAR-based Ooredoo and the Leo Messi Foundation have officially launched the first in what they are calling a new wave of mobile health clinics for Indonesia.

The launch in Jogja, the capital of the Yogyakarta Special Region in Java, marked the first step in an on-going expansion of Ooredoo’s and the Leo Messi Foundation’s healthcare initiative announced in May this year.

Plans are in place to make more clinics accessible in Indonesia, Myanmar, Algeria, and Tunisia as part of the programme, Ooredoo said in a statement.

The clinics will play an informative role, in addition to providing people with a range of free services, including medical checks, dental checks, nutritional advice and vitamin distribution, the company said.

The launch of the mobile health clinics in Jogja was also attended by 150 parents and 150 children (pic above) who received messages about the prevention and cure for common illnesses, as well as the importance of a healthy lifestyle and education. These members of local rural communities were also able to trial the clinic’s services.

The company reported revenues of US$9.3 billion in 2013 and claims a consolidated global customer base of more than 95 million people as of Dec 31 2013. Ooredoo’s shares are listed on the Qatar Exchange and the Abu Dhabi Securities Exchange.

“These Mobile Health Clinics are an investment in the future of the communities we serve,” said Ooredoo Group chairman Abdullah Mohammed Saud Al Thani.

“I have had the opportunity to see the Mobile Clinics in action. They travel out to remote areas, staffed by medical professionals and volunteers, and actively work with the community to address a range of healthcare issues.

“It is inspiring to see the work they are doing and we are passionate about helping them to reach as many people as possible, not only here in Indonesia but across all of the markets that we operate in,” he added. The Leo Messi Foundation was founded by the Argentinian and FC Barcelona football superstar in 2007, as a charity supporting access to education and healthcare for vulnerable children. Messi (pic) is also a Unicef Goodwill Ambassador.

“The Mobile Clinic programme was created as an immediate response to some of the serious health issues facing people in Indonesia’s rural and under-served communities,” said Alexander Rusli, chief executive officer and president of Indosat, Ooredoo’s company in Indonesia.

“To date our clinics have treated 600,000 people in Indonesia and our work with Leo Messi and the Leo Messi Foundation has provided an important boost to this programme.

“The extension of the service will teach children the importance of a healthy lifestyle and of disease prevention. These are lessons that will stay with them for the rest of their lives, and we hope they will teach them to their children, providing a lasting legacy of better health and wellbeing for our nation,” he added.

The Ooredoo Mobile Health Clinic initiative was launched in 2013 in partnership with the Leo Messi Foundation. As part of this partnership, the two organisations are providing healthcare in rural areas across Ooredoo’s footprint in South-East Asia, the Middle East and North Africa, aiming to reach more than two million young people with services by 2016.