Musical theatre gets a digital tech boost with OlaBola the Musical

ENFINITI Vision Media revealed on Jan 30 the cutting-edge staging technology that will be used in the production of OlaBola the Musical. The musical, which will be staged at Malaysia’s main venue for stage productions Istana Budaya, will be the first production to use such technology in Malaysia.

The musical, which is based on the hit Malaysian film Ola Bola about the Malaysian national football team that successfully entered the 1980 Summer Olympics uses 3D production mapping, 360o surround sound and state-of-the-art lighting technology to elevate the experience of the audience and immerse it in the atmosphere of a football game at a stadium. Chief dream-maker of the Enfiniti Group and director of OlaBola the Musical Tiara Jacquelina explained that the 180o projection that is part of the staging will allow the audience to experience being in the atmosphere of Stadium Merdeka (the national stadium) in 1980 during the exciting Olympics qualifying match.

“We are able to create this heightened experience now because of digital technology. This is going to take theatre to a whole new level, not just in Malaysia or Southeast Asia, but it’s possibly the first time in the world that musical theatre is experienced like this. It’s a game-changer for sure,” she said.

“This technology is not new, but it is the first time it is being used in musical theatre,” said visual effects producer Danny Hoo of Insight Visuals, explaining that the projection technology has been used at major sporting events such as the Olympics and during large concerts.

Hoo revealed that Enfiniti has invested in 13 high-end projectors that have various lumens (brightness) and four massive projection screens measuring between 12 meters to 15 meters.

“We are also using some of the most powerful media servers by D3 Technologies and high-quality visual effects to digitally devise the different scenes from the Kopitiam [Malaysian coffee shop] to Stadium Merdeka.” These projections and hand-drawn illustrations created by Elan will be projected onto massive LED screens, melding traditional theatre set production styles with new-age technology. Digital floor mapping, animated visuals, lighting and sound, and, of course, rousing performances by the cast, will complete the spectacle.

“Football is so emotional, and being in a stadium during a game means you experience the emotions first hand. That’s the effect our team has in mind. We also wanted to allow people to re-experience the story we all know from the film live on stage. That was the challenge – how to create that world live in the theatre?” said Tiara.

However, she points out that the heart of the production is the story so the digital technology is not used whenever it did not serve to enhance the story.

“Technology is moving at lighting speed and the Malaysian creative industry needs to be ahead of the curve,” she said, adding that she hoped that the way OlaBola the Musical is using digital technology will catalyse more theatre productions to use it and help shape the way the Malaysian performing arts scene develops in the future.

“I hope [people in the industry] can at least be open to the ideas of how tech can support their work.”

OlaBola the Musical will premiere on Feb 8 and run until March 11. Tickets are available for purchase on the website at www.olabolamusical.com.

5 new IT jobs for the age of artificial intelligence 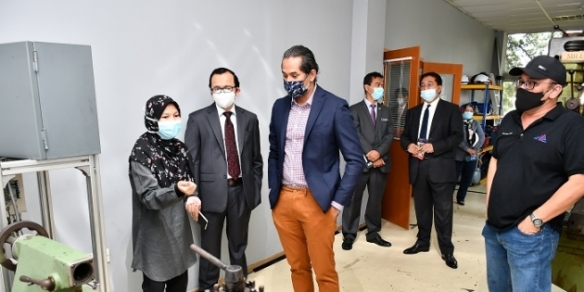