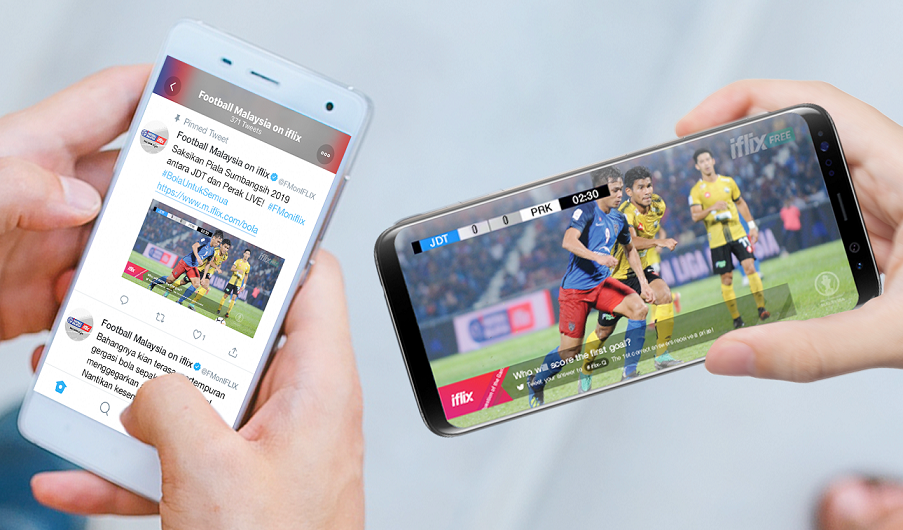 IFLIX, an entertainment service for Southeast Asia, and social media platform Twitter, announced their collaboration, in a move to revolutionise fan access to premier football in the region.

For the first time in Malaysia, fans will experience the cutting edge of digital integration and innovation in sport. With this collaboration, iflix and Twitter are combining live stream technology and social media commentary to engage the mobile-first generation like never before.

All season, beginning with the first kick-off on Feb 1, football fans across Southeast Asia will have direct free access to more than 200 Malaysian Football League matches on all connected devices via Twitter on iflix’s state-of-the-art new Webview Player, no download, no sign up, no login required.

With a Twitter login, however, fans can participate in the real-time commentary, interactive game-play, and featured polls via select hashtags throughout each match.

In addition to live streaming matches, iflix will make real-time highlights, clips, and interviews, available via Twitter Moments as an immersive – and shareable – football community building tool for fans and clubs.

Bridging iflix’s live streaming technology with Twitter’s real-time engagement, this development will enhance the viewing experience and bring fans even closer to the game.

iflix acquired exclusive online video streaming rights to MFL matches in the 10-year joint venture with Malaysia Football League in January 2018. Since then, the company has live-streamed matches across all major tournaments including Piala Sumbangsih, unifi Liga Super, Shopee Piala FA, the inaugural Malaysia Challenge Cup, and unifi Piala Malaysia, as well as more than 800 episodes of catchups, highlights, and original shorts, on the dedicated Football Malaysia on iflix channel, available on iflixFREE and iflixVIP, via the native app, mobile web app, and dedicated microsite.

In addition, iflix is collaborating with football portals Semuanya Bola and Goal.com to bring live matches closer to the fans with the integration of iflix’s live stream service.

iflix co-founder and group chief executive officer, Mark Britt, said, “This is a massive leap forward for iflix in our mission to democratise Malaysia’s favourite sport. Last season, we set out to return football to the people, the true fans of the game, who were denied access by expensive, monopolistic cable companies. We are so proud to be the first video streaming service in Southeast Asia to power MFL live-streaming technology on Twitter, and driven by the opportunity to liberate the sport and empower the fans.”

Twitter Head of Sports Partnerships, SEA and Greater China, Maurizio Barbieri, added, “Broadcasting every game of the season for a premier first-division football league is a first for Twitter in Southeast Asia, and a remarkable opportunity to combine the huge amount of football conversation on the platform with the premium content that drives this. We have enjoyed great success live-streaming with leading sports broadcasters around the world, so we are excited to collaborate with iflix to bring more live football to one of the most passionate fanbases in the world.”

Malaysia Football League CEO, Kevin Ramalingam, commented: “The pioneering vision behind this deal represents exactly why MFL chose to work with iflix a year ago. We are excited with the digital integration and innovation in sport, and proud to be part of the future of football for the region.”

This collaboration builds on iflix’s growing live sports streaming offering which includes UAAB basketball in the Philippines, Liga 1 football and the McGregor v Mayweather bout in Indonesia and T10 and T20 cricket in Bangladesh.