AS part of an IBM Smarter Cities Challenge grant, a team of IBM experts has developed a comprehensive blueprint for Negeri Sembilan's economic development and transformation by 2020.

The IBM team has spent three weeks in the region funded by an IBM Smarter Cities Challenge grant that Negeri Sembilan had secured, the US tech giant said in a statement.

Team members worked with the state government and its one-stop IT agency Rangkaian Minang (NS) Sdn Bhd (RMNS) to solicit input from numerous stakeholders in the state, located on the western coast of Malaysia.

Negeri Sembilan is attempting to shift to a service-based economy from one that has relied principally on agriculture, IBM said in its statement.

“The changing economic landscape is leading us to … re-examine opportunities for deeper investments in the region,” said the State Secretary of Negeri Sembilan, Mat Ali Hassan.

“The recommendations from the IBM team will help us to streamline that effort and focus our efforts on the areas that will lead to the highest gains,” he added.

IBM produced a roadmap  for how the state's agencies could collaborate to attract new investment.  The team also recommended the formation of a body to oversee the realisation of Negeri Sembilan’s economic development goals.

“We noted that there was great scope for cross-agency collaborations within the government, including proactive engagement in citizen-centricity and long term sustainability,” said IBM Malaysia managing director Paul Moung (pic).

“Taken together, these initiatives should help the region realise sustainable economic growth. We hope that the broad base of expertise and experience this team has will contribute to the state being able to meet its objectives using smart technologies,” he added.

The state’s leadership also recognised the value of tradition and culture in ensuring that Negeri Sembilan remains a state where citizens want to live, learn, work, and raise their families.

It wants to retain manufacturing as a core economic driver, yet diversify its economic base to ensure that it will not be subject to market volatility.

Negeri Sembilan Darul Khusus was one of the municipalities to win a IBM Smarter Cities Challenge grant (#smartercities) in 2013.

As the first state in Malaysia to receive IBM’s Smarter Cities Challenge grant, Negeri Sembilan is in a privileged position to benefit from knowledge transfer that will make it a front runner in shaping a smarter state, IBM said.

The company has deployed 600 experts on six-person teams over the past three years that have provided strategic and practical advice to 100 municipalities.

These three-week engagements, each valued at US$400,000, have helped cities and regions address key challenges in the areas of economic development; water, energy and environment; health and social services; transportation; and public safety.

At the end of engagements, IBM presents comprehensive recommendations for solving the problem, followed weeks later by a more detailed, written implementation plan. 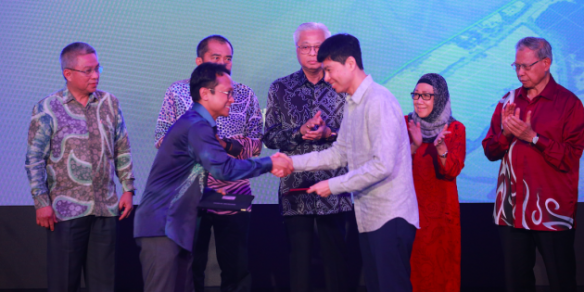