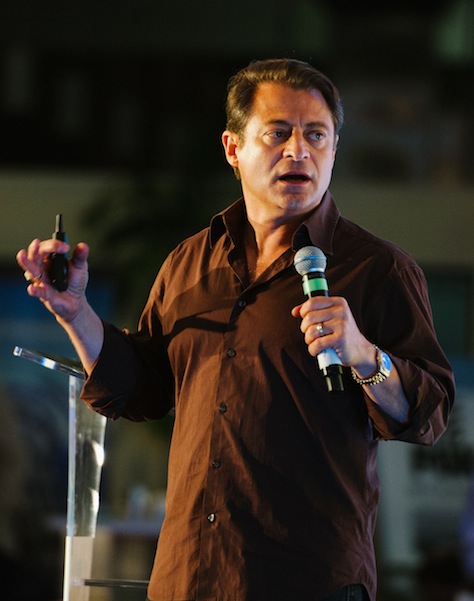 THE Global Impact Competition has been launched in Malaysia, a joint effort by Mindvalley under its Project Renaissance initiative, in partnership with Singularity University.

Project Renaissance is Mindvalley's campaign to "hack and innovate" on Malaysia's entrepreneurial culture and turn Kuala Lumpur into an international startup hub by hosting grassroots meet-ups that bring together communities from a variety of industries.

Singularity University (SU) is an unaccredited university founded in Silicon Valley in 2008. It aims to "educate, inspire and empower leaders to apply exponential technologies to address humanity’s grand challenges."

Founded by the XPrize Foundation chairman Peter Diamandis (pic) and Google's engineering director Ray Kurzweil, the university’s mission is to gather the world's brightest minds and personalities -- guided by a faculty of scientists, technologists, entrepreneurs and futurists -- to focus on technologies that can solve humanity's hardest problems.

The Global Impact competition is one in which awards ideas for products or services that could improve the lives of one million citizens within the next five years.  The idea can be used to solve a challenge in any area that impacts humanity – pollution, education, healthcare, transportation and even corruption.

In 2013, the competition was hosted in 13 different countries including Australia, Argentina and Russia. Eight other countries will be included in the roster this year, including Denmark, Italy and the Netherlands.

Open to Malaysian citizens aged 21 or older, the winner will receive a full scholarship worth over RM95,000 to the Singalurity University's Graduate Studies Programme from June-August 2014 at its NASA Research Park campus in Silicon Valley.

The scholarship covers tuition, all housing and scheduled meals, academic materials and site visits during the programme.

Through the three-month Graduate Studies Programme, the winner will also be able to visit some of the most innovative companies and organisations in the world such as US space agency NASA, Google, Facebook, Tesla Motors, Nokia and Autodesk.

"Upon his or her return to Malaysia, the winner will recognised as a leader in technology and innovation in Malaysia, and be invited to share his or her experience with the Singularity University on stage at a Project Renaissance event in Mindvalley," said Mindvalley chief executive officer Vishen Lakhiani, who is also on the Innovation Board of the XPrize Foundation.

"We are looking for the smartest, most driven and innovative Malaysian mind – be it in the field of science, technology, entrepreneurship, education, finance, medicine or the arts, to represent the country on a global scale and play a big role in making Malaysian history," he added.

Vishen will also on the judging panel together with Dr Clarence Tan, founder of Bond Wireless in Australia and an alumnus of Singularity University. More judges will be named to the panel in the coming weeks. A desire for minds from home

Tan (pic) also represents the university as an ambassador for Malaysia and Australia and is to date, the only Malaysian to have enrolled in SU’s Graduate Studies Programme.

“I would love to see another Malaysian, with our rich tradition of culture, innovation and entrepreneurship, on a global stage moving humanity forwards," he said.

"We never know where the next great breakthrough for progressing humanity will come from, but I dare say that a Malaysian stands in good stead globally stemming from our innate entrepreneurial nature and our fantastic interpersonal skills culminated from a multicultural society,” Tan said in an interview with Digital News Asia (DNA).

He told DNA that the idea to bring the Global Impact competition to his home nation came from a positive experience presenting to and engaging with many promising young people here.

Last year, on an invitation from MindValley chief designer Ngeow Wu Han and Vishen, with local youth leaders Lorraine Siew and Yau Hui Min, Tan came back to Kuala Lumpur to talk about his experiences with SU and it motivated him to get the competition up and running after meeting so many motivated youth from all walks of life.

“My good friends Alyah Abdullah, founder of Kampung Kravers, and her husband Ayub Ali, an ex-banker and colleague of mine, generously donated the funds to enable this competition after hearing how it [would give] a Malaysian the opportunity to progress humanity on a global scale,” he said.

“I am grateful to all these people and many more who have assisted in getting this event off the ground and putting Malaysia on the map for innovative entrepreneurship,” he added.

When asked what he hopes to achieve from the first Global Impact competition and raising awareness of SU’s endeavours, Tan said he wants to enable more Malaysians to be exposed to exponential technologies and how they can be harnessed for progress.

“More importantly, I would also like to see not just the youth of Malaysia but also the senior citizens as well as the greater community as a whole, understanding and embracing these technologies that can give them a healthier, wealthier and happier life,” he said.

He added that in many ways, the individuals who apply are more important than the ideas, though the ideas themselves are important in assisting the decision in selecting the winner.

According to Tan, the ideas may be outrageous but if the individual has the ability to think through on how exponential technology can be applied to solve a grand challenge, then he or she has the opportunity to make a significant positive impact on a global scale by winning the competition and perhaps working on it at SU with classmates from over 35 countries.

If there is one piece of advice Tan has for interested candidates, it is this: “Be sure this is something you want to do. You should love technology, dealing and working with 79 other awesome people from around the world and have the passion to solve grand challenges.”

Joining this competition, said Tan, is also a slightly easier pathway to entering the university’s graduate programme with probability of admission for direct applications less than 2% “from historical experience and is based on academic achievement, entrepreneurial skills, global experience and passion to solve grand challenges.”

“At the end of the day, your academic achievements are not as important as your ability to successfully use exponential technology to solve the grand challenges, particularly from the competition’s perspective,” he said.

To join the competition, applicants must submit a three-minute video and complete an entry form provided on the competition website, by 6pm on Saturday, March 8. Applicants may apply as an individual or as a team, but only the leader (as elected by the team) will be sent to SU should the team win.

Following the contest deadline, a shortlisting process will be conducted by Vishen and Tan to select the top five finalists, who will have to present and pitch their idea to the full judging panel on Saturday, March 22 at a closed event at the Mindvalley headquarters in Bangsar, Kuala Lumpur.

To find out more about the SU Global Impact Competition, click here.