And “free trials,” said Nelson Kwok, founder of the Nelson’s Corn franchise and immediate past president of the Malaysia Retail Chain Association, which claims over 200 members including Poh Kong, Popular Bookstores and 7-11.

“These days, technology changes very fast. Retailers cannot afford to buy hardware only to see it become obsolete in a short while,” he said, adding that one retailer had also complained of having spent “hundreds of thousands” on accounting software, only to have to update it after three years.

“It’s very challenging for a retailer to adopt technology. So if you’re very confident of your product, offer a free trial, and instead of asking for an outright purchase, consider continuous updates and support,” said Kwok, adding that retailers would be more amenable to cloud-based or SaaS offerings.

He also said that the retail industry is facing challenges in hiring people, so having an inhouse IT team would be beyond most of them.

“We retailers may be very traditional, but we definitely want to improve. We need the right kind of people to approach us – credible and trusted companies that are not going to disappear after three months.

“There’s a big potential. We’ll certainly be willing to try outsourcing – it will take away a lot of our headaches,” Kwok said at the DNA-TeAM Disrupt session on Bricks to Clicks in Kuala Lumpur on Aug 20.

DNA-TeAM Disrupt is a monthly panel discussion and networking session organised by Digital News Asia (DNA) and the Technopreneurs Association of Malaysia (TeAM). This month’s event included SME Corp as the venue and refreshments sponsor. 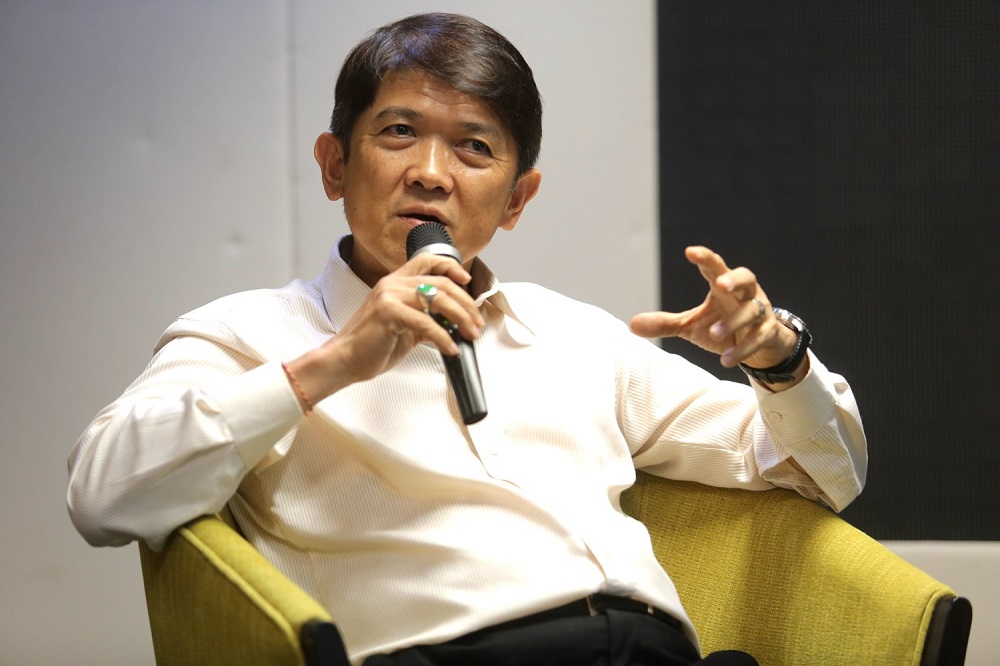 But Kwok (pic above) noted there are many challenges ahead for technology companies wanting to get into the retail space.

“I think currently, there are not many proven models to shout about. And not many companies that we can depend on, and even if there are, their charges are too high so not many retailers are willing to try it out,” he said.

He said that Malaysia Retail Chain Association has been has been engaging with technology providers, but even with a simple software app like Maxis’ FindIt, not many were willing to try it.

In March, cellular giant Maxis launched FindIt, a digital directory service, in partnership with FindIt Malaysia, the local subsidiary of an Indian-based company. The app, which was available for free to all Maxis customers, provides information on 175,000 business listings in over 2,500 categories, the company claimed.

“It’s a good tool to bring the customer to the retail outlet. Yet we found that people resisted using that tool because of the cost of getting into it was quite high,” said Kwok, adding that this was despite Maxis offering a free six-month trial.

“Retailers will wait until someone is successful using it before they will come in. It’s not to say we’re against technology, but we’re very cautious about the so-many software solutions available out there,” he added.

This is an issue of culture, argued member of the audience Kurt Allison, marketing director at high-speed fibre Internet service provider Ohana, which is focused on the SME (small and medium enterprise) space.

“Many people in Asia would hoard gold bars under their mattresses rather than invest in the stock market, which could potentially give them returns that are five times more.

“What businesses offering these services [for the retail industry] need to understand is that it’s a cultural thing. My question is, what can we do to take what’s worked outside, and put it into a model that can be shared with businesses here?” he said.

Back from the future According to Kwok’s fellow panellist, Rohit Maheswaran (pic above), founder of retail-focused startup Ebizu, the whole idea is to tie together the online and offline worlds using the appropriate technologies.

“When you talk about ‘from bricks to clicks,’ from my perspective, there are two aspects.

“The first is the ability for small merchants to get online, whether it is through blog shops or using [e-commerce platform] Shopify; whether it’s running a loyalty programme or getting food delivered through FoodPanda.

“The second aspect is adopting those features that e-commerce shops have, such as personalisation, retargeting and recommendations. The whole idea is to translate all that into actual sales at the point of purchase, which is what happens at the retail outlet,” said Rohit.

This, he said, would allow retailers to pursue “that holy grail of advertising, which is to change the brand preference at the point of purchase” by sending that customer coupons or promotions for a different product.

That can only be done with technologies that can help retailers identify their customers and their behaviours and preferences, and then to personalise offers for them, he added.

However, Ohana’s Allison was less confident. “You’re up there talking about technology, what’s amazing and what can be achieved.

“If you come from other places such as Australia, the United Kingdom or the United States, it’s almost like coming back from the future because these things are multibillion-dollar industries outside of Malaysia.

“And Malaysian businesses are saying ‘we’ll wait and see.’ That makes me think that the technology is not the important part – you have to look at the actual business owner.

“I can go to a business owner and say ‘Mr Customer, you currently don’t have a website. I can offer you a website for RM100 a month, and that would put you in a space where 70% of your competitors are not active. It would be a new revenue stream. Would that be something that you’ll be interested in?’ And the answer will be ‘No.’

“This makes me think that technology itself doesn’t really matter,” added Allison. But it’s not like retailers can be sanguine about all of this either. The opportunity is now, and a wait-and-see may lose them many of today’s shoppers, according to points raised by Hisham Isa (pic above), the chief marketing officer of mobile advertising network BuzzCity.

“One of the key messages we always share [with our advertisers] is that users are hyper-connected.

“They’re always connected, and they’re really empowered. They invariably know a lot about their purchases, long before they get to the shop.

“By the time they get to the shop, they’ve pretty much decided what they’re going to buy,” he added.

Hisham argued that this does not contradict Rohit’s ‘holy grail of advertising,’ which is to change the customer’s decision at the point of purchase.

“The challenge for retailers is that if consumers have really decided what they’re going to buy, they’ll buy it online.

“But most of them, having already made their decisions, will go to the shops to see what else there is. The in-store shopping experience is still a major factor.

“The challenge for in-store shopping is now different: It is to provide services for highly empowered and hyper-connected consumers … who are still researching on-site. They don’t stop shopping until they actually buy something.

“That’s a key challenge and I understand the need for retailers to try and work with technology to try and deploy in-store to, yet again, pitch a sale,” Hisham added.

Hisham was also sympathetic to Kwok’s insights into retailers in Malaysia, and their wait-and-see attitude.

“Technology is so commoditised these days, and there’s a lot of it. It’s difficult choosing the right technology, and even when you’ve done so, you have to develop a strategy around it and train your staff,” he noted.

But he was also confident, from BuzzCity’s experience with its network of 450 million users across eight countries, that there is “a large and very active base of businesses in Malaysia that trade online.”

“Usually it’s the small businesses which move fast because they don’t have legacy products to protect,” he said.

For larger companies, “it takes a lot of political willpower to say ‘I am going to discard this, and I am going to move elsewhere.’ It’s a big decision, and requires a lot of courage,” he added.

His views were echoed by Ebizu’s Rohit. “It’s still early days in this region, and there’s a lot of old-school thinking where retailers have their regular customers and don’t want to disrupt anything.

“It will take time, but will happen, especially as we target the 3Ms of mobile commerce: The moms, the millennials and the multinationals,” he said, referring to an article by Phil Carter of Trinity Ventures published in TechCrunch.

“Once everyone sees the value and they see the conversion rates, and results they can measure – which is key – that’s the point when I think it will really take off in a big way,” he added.

Disrupt#21: Bricks-and-clicks the way to go?