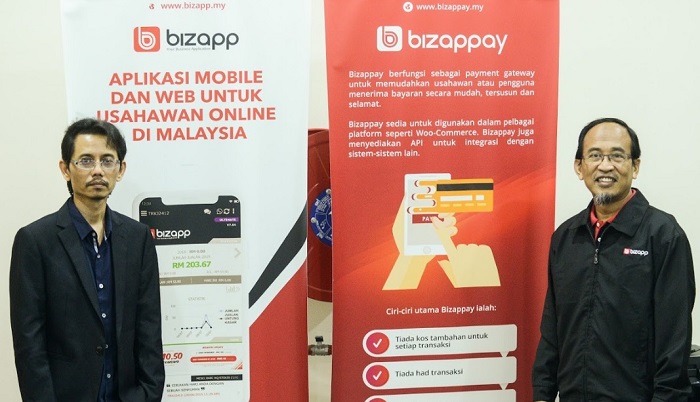 They are tech startup cofounders that almost stereotypically complement each other. Hasnol Mizam Hashim is the technical one – the one who conceived BizApp from the ground-up; who dug his fingers deep into the code to mould it. Mohd Taib Pardi, on the other hand, helps grow the business from the non-technical side.

Together, they form the core of BizApp, best described as a “rural social commerce platform.” Launched in 2017, BizApp was created when both Hasnol and Taib recognised the need for a systematic, technological solution to serve agent-based businesses in Malaysia.

BizApp specifically fills a gap amongst Bumiputera businesses in suburban and rural populations that primarily sell through an agent-based business model. The model allows for sellers to function with minimal cost, and for stockists and business owners to have a number of people that help market and reach customers.

But since these businesses are often conducted through social media channels and messaging apps like WhatsApp without much structure, management becomes a challenge for both the agents and business owner. How do you check if a particular stock is available? How do you keep track of your agents in larger numbers?

BizApp allows its users to manage daily business operations including order and fulfilment management. The core concept is simple, but its outreach can be significant. The platform essentially enables non-urban people to engage in e-commerce, equipping them with the means to be more efficient, thus more successful.

In addition to that, BizApp allows these businesses to grow. Hasnol says that product owners sometimes avoid taking in more agents and stockists because it makes it more difficult to manage. Imagine getting tonnes of messages daily asking about orders; or needing to identify which orders have been packed and posted.

“You won’t be able to grow. But with BizApp, you can have 10,000 agents and have no issues with management,” says Hasnol. The founders mention one of their primary users, a clothing brand called Sabella. Prior to BizApp, Sabella’s sales were below RM1 million in 2017. After using BizApp, Sabella’s sales jumped to RM5 million in 2018. In 2019, sales rocketed to RM24 million, proportionate to the increase in agents. Needless to say, the duo are ecstatic that their system has been able to help Sabella achieve skyrocket growth.

BizApp currently helps over 200,000 agents, handling a gross merchandise volume (GMV) of over RM600 million transacted in 2019. As Commerce.Asia Venture Sdn Bhd founder and executive chairman Ganesh Kumar Bangah (a 2-time Digerati50 himself) puts it, BizApp is “Malaysia’s Hidden Gem.” Ganesh made an undisclosed investment into BizApp in early 2020.

The soul of BizApp, however, are founders who understand the needs of small business owners and agents. The platform was created to fill their needs in the first place. Prior to launching BizApp, Hasnol was working at a private IT company as a developer. He supplemented his income through e-commerce, selling products on EBay and subsequently becoming a stockist for several products.

When he started having a few sub-agents under his wing, Hasnol hit a wall. Managing orders become a challenge, and since he was working full-time with another company, he had limited time to tend to his agents. “I had agents calling me to ask for stock availability, or the price of the product, or the tracking number for shipping. I realised I needed a system that makes it easier for me to manage this,” he says.

He started developing BizApp on the side on May 2016 and released it on iOS and Android after only one-month of development. This is despite not being used to developing for iOS – he had to pick up the skill on his own.

When Hasnol first released BizApp, the product was given free to his agents. A few months later, once the potential of the app began to surface, he started offering it for RM99 per year.

To say BizApp resonated in the market is an understatement. After getting around 100,000 users by end 2017 (though most were using the free version), Hasnol concluded that it was time to focus on BizApp full-time, and quit his job.

He had met Taib in the same company, who was then handling marketing and HR. They agreed to become partners and launched BizApp Ventures Sdn Bhd in Jan 2018. The basic features of the app are free, with users paying for more advanced features at RM99, RM299 and RM499.

While most entrepreneurs have to pitch to investors, BizApp began seeing investors approaching them in 2019. They held off. Taib explains that while their user-base allowed them to continue sustainably, they knew growing further would require investors. But finding investors that aligned with their vision, not merely provide them money and expect a ROI, was the key.

Not until they were approached by Commerce.Asia did they find the right fit. Commerce.Asia was building an e-commerce ecosystem but was missing a part – one surrounding an agent-management system. “Commerce.Asia has a vision and a roadmap, and is aligned with what we want to achieve,” Taib says.

The sum of investment into BizApp was kept under wraps, though Ganesh confirmed that it amounts to a “seven-figure sum”.

BizApp is now looking beyond the horizon. They’re targeting to expand into Indonesia next. Not that the country doesn’t have BizApp users, but the founders are now looking to make the app multilingual and multicurrency so that it can better serve Indonesian users, on top of understanding the country’s selling process and market characteristics.

The founders believe that they will grow and evolve in accordance to what entrepreneurs need. “We know their business, we know how they grow. But we don’t know, in two years, how business will change. What will the next trend be? What impact will Cpvod-19 have? We’ll just have to keep track and keep up,” Hasnol says.

“When they have new requirements, users will inform us, and we will provide their needs. We’re technically their IT people,” he concludes with a chuckle.