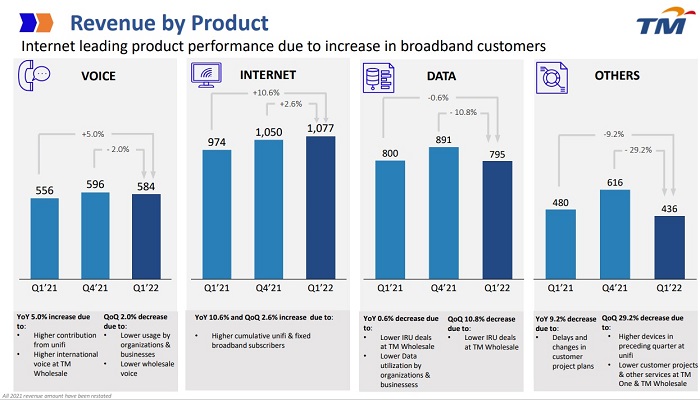 The Group’s operating revenue increased by 2.9% to US$657 million (RM2.89 billion), compared to US$639 million (RM2.81 billion) in the same quarter last year, driven primarily by increased demand for voice, Internet and multimedia. Despite rising competition to offer converged solutions among telco and other technology players, TM continued to deliver strong growth across its operations.

TM further ramped up its transformation initiatives, delivering profit after tax and non-controlling interests (PATAMI) for the quarter at RM339.9 million or 4.4% higher than the RM325.5 million recorded in 1Q2021. The Group also recorded lower financial costs subsequent to the early redemption of its RM2.0 billion sukuk in March 2021, as well as lower foreign exchange translation losses on borrowings. The Group has applied the Cukai Makmur statutory tax rate accordingly for the current quarter.

Accelerating into the second year of its Transformation, TM brought forward its manpower optimisation to enable earlier realisation of expected benefits to the Group. This, along with foreign exchange impact on trade settlement has led to a 5.0% decrease in EBIT at RM560.4 million for 1Q2022 compared to RM589.7 million in the same quarter last year.

Unifi continued its growth performance, with revenue increase of 10.6% from RM1.25 billion to RM1.38 billion in the current quarter. Sustained by increasing demand from Internet, voice and sales of devices, with cumulative fixed Internet subscribers increasing by 17.5% against the corresponding quarter last year, it remains the largest growth contributor for the Group.

In its analysis of TM's results, AmBank Research said it remains upbeat on TM’s outlook given its critical role in the MyDigital Initiative with ownership of the High-Speed Broadband network, which underpin a faster pace of growth for its wholesale revenue beyond FY22F. It also noted that TM’s 1QFY22 fixed broadband subscribers climbed by 70,000 QoQ, with unifi users surging 134,000 to 2.6 million, partly offset by a 64,000 decline in Streamyx users to 214,000. "We expect this trend to continue with TM phasing out its Streamyx services and migrating all its users to unifi by 2025," said the research house.

Unifi will continue to maintain its leadership in fixed broadband and enhance its Fixed-Mobile Convergence (FMC), enriched with TV and streaming content. This reflects its commitment to improve its FMC customer experience with better and seamless service. unifi will also grow its SME digital platform as a one-stop service centre for solutions catering especially to SMEs nationwide.

TM Wholesale (TMW) also recorded a growth performance for 1Q2022, with revenue increasing by 1.2% from RM631.9 million in 1Q2021 to RM639.5 million, mainly contributed by higher revenue from voice and data services. This was underpinned by increasing demand from High-speed Broadband Access (HSBA) and higher International Voice and Data.

To date, TMW continues to enable industry broadband and 4G network via its fibre infrastructure, with the ongoing 5G rollout further strengthening that role. On the international front, it will continue to serve other OTTs and hyperscalers with connectivity and data centres, while regionally, TM Wholesale aspires to establish Malaysia as a digital hub for ASEAN via new submarine cables, enhanced data centre solutions and edge computing.

TM One, the Group’s enterprise and public sector arm, recorded a 7.4% decrease in revenue from RM925.2 million to RM856.8 million in 1Q2022 due to decline in data services revenue. “With our economy and borders reopening, TM is powering Malaysia’s journey on its road towards recovery, by ensuring the vision of an inclusive and extensive Digital Malaysia becomes a reality," said Imri Mokhtar (pic), TM Group CEO.

Into the second year of its transformation, the telco is focused on strengthening its core business, said Imri. One of the opportunities is in digital solutions and services for enterprises. Building on TM One’s existing capability and relationships with enterprises and the public sector, TM expects to deliver speed and agility through its new digital arm Credence: a corporate startup led by technology leaders.

“unifi continues to better its fixed broadband and Fixed-Mobile Convergence value proposition to improve customer experience, while expanding our offerings to provide quality entertainment to customers at home or on-the-go," said Imri.

“We have also achieved some key milestones in our sustainability efforts. TM One has successfully secured the Green Electricity Tariff from Tenaga Nasional Bhd for its data centres in Kuala Lumpur, Cyberjaya and Johor Bahru, contributing to a lower carbon footprint as the demand for cloud storage inevitably increases. This is in addition to the existing Green Building Index certification earlier obtained for its core data centres. TM’s broader ESG commitment also remains consistent with Malaysia’s initiatives towards achieving net-zero Greenhouse Gas emission for the country by 2050," adds Imri.

He highlights that TM Wholesale continues to establish Malaysia as a regional digital hub via new submarine cables, edge computing, data centres and supporting international connectivity, while, on the domestic front, TM Wholesale continues performing its role as the enabler for industry broadband, 4G and 5G network via fibre infrastructure.