Leon Jackson, head of IT at UMSC, said the healthcare industry in Malaysia is changing with the times and technology is what is driving this change. Speaking to the media Tuesday (July 30), Jackson said one of the main drivers for the adoption of virtualization in UMSC is that mission-critical systems have to meet very demanding requirements while being affordable.

He noted that healthcare IT vendors traditionally sold medical systems in a siloed manner – in bits and pieces – to meet a certain requirement at a certain time. As a result of this, information is stored in disparate systems and these “islands” of information can present a problem for doctors, who need patient data at their fingertips but can’t get to it.

“Imagine a doctor who had to go hunting across various systems and silos – some even on physical paper – just to look for different aspects of a patient,” Jackson explained. “This is a real challenge in healthcare IT [today].”

Virtualization is a technology that makes it possible to run more than one operating system on a single computer by the creation of virtual machines instead of relying on physical processors to serve users computing power. This helps organization reduce costs and lower energy consumption by enabling them to use more of the computing power that they already own. Jackson (pic) also noted these siloed systems become hard to maintain after a while. “Before you know it, you’ve got 10 to 20 departments asking you to buy different systems to meet different needs. Each vendor will specify different requirements for software, storage and devices and all this investment can get out of hand if it’s not planned and consolidated properly.”

Besides the challenge of disparate information, Jackson said mobility is playing a big factor in how doctors are entering patient records and in ensuring that they are done as accurately as possible as well as when dispensing medicine in the pharmacy.

“Mobility is more than a fad or novelty in healthcare. Traditionally, when the healthcare industry started moving towards electronic medical records and digitized information, doctors seeing, say, three patients, would need to walk to a fixed terminal and input data only after diagnosing their patients.

“These entries could potentially be affected by how well the doctor remembers them, how well he differentiates between the three patients, and who interrupted him on the way to that terminal. Mobility addresses these issues as it gives doctors real-time access and will help them contribute information to the patients’ records immediately. This helps with the safety and delivery of care.”

Jackson also noted that if a clinician were to order drugs, [this would help them] prescribe the correct drugs to the correct patient according to the correct instructions [for taking the drug].

“Because the drug packing is electronically identifiable by bar codes or by radio frequency identification (RFID), a nurse carrying a mobile device will be able to identify these drugs accurately and would be able to administer the correct drug to the right patient, thereby minimizing any potential errors.”

To support such advanced infrastructure, UMSC had to virtualize and invest in a cloud-enabled IT infrastructure, which supported features such as resource pooling, high availability of resources and rapid elasticity, and a system that can be metered and measured.

Jackson said that work started on choosing the right virtualization vendor for its IT infrastructure some 18 months ago and after extensive investigations, the healthcare provider settled for VMware. 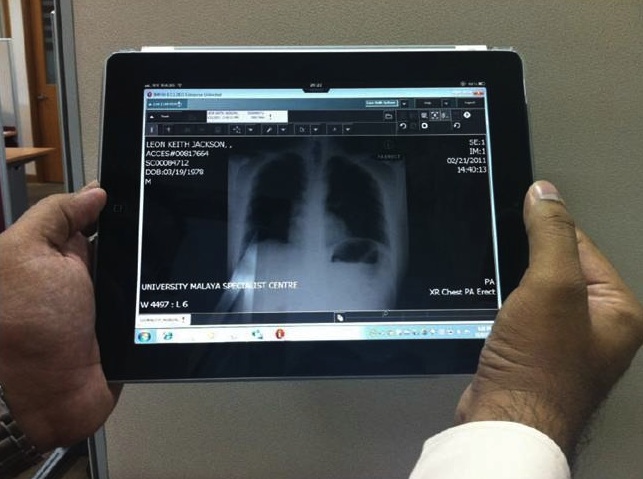 Jackson said he and his team felt that the Palo Alto, California-based virtualization and cloud player's experience in the market and the mature ecosystem surrounding its products – including its close integration with the storage products with a range of vendors – played a significant role in clinching the deal.

“Consolidation is very important [to us] and virtualization, whether front-end or storage, helps brings down the cost,” he said. “By having one consolidated server and storage farm and the hosting of all our software applications on this farm, we only spend 40% of what we would otherwise have spent on [if it had not been virtualized].”

Asked how much savings this translated to, Jackson declined to say, adding only that a typical healthcare IT infrastructure usually runs “into the millions of ringgit,” including all the applications needed to run the hospital.

Jackson however acknowledged that its cloud infrastructure is currently based on a private cloud model, where only users within the UMSC’s network can access the data. Quizzed on whether UMSC would consider some form of hybrid cloud infrastructure, he said parts of the network involving things like appointment scheduling or billing profiles could be open to the public "sometime next year.”

On future plans, Jackson said that UMSC’s goal was to have most software and applications based on the cloud and delivered over a thin client model with tablets like Apple’s iPad (pic, click to enlarge), save for some very specialized diagnostic equipment which are still used.

“We started with about 100 concurrent users on the iPad in the pilot phase and we hope to ramp this up in the near future so that those using the clinical systems can benefit from the use of mobile devices.”

On whether the use of such devices would create an impression in the minds of "Joe Public" that UMSC is an expensive hospital to go to, Jackson acknowledged that this is going to be a challenge to overcome.

“We need a lot more education and awareness generated so that patients will not think that using such devices will increase their healthcare cost,” he said. “What we save in the backend [on IT infrastructure cost] can be utilized to modernize healthcare provision.”