IT IS a category of startups that began getting attention in the United States and Europe as early as 2008, with well-known outfit TaskRabbit getting the lion’s share of the spotlight.

Since then, there has been an explosion in the number of services marketplace startups, offering users everything from house cleaners and laundry services to handymen, all accessible via a few taps on a mobile application.

Within South-East Asia, it is a movement that’s been picking up of late, with such startups climbing up the ladder of consciousness since late 2014.

In Indonesia, startup Pembantu is helping a burgeoning middle class find domestic helpers for cleaning, babysitting, or as live-in nannies. The company also has regional aspirations, with plans to expand to other markets under the brand name MaidMarket once it has garnered enough traction in its home market.

But perhaps the largest indicator of any segment’s growth potential is when Germany-headquartered Rocket Internet gets into the game.

It backed Helpling, an online marketplace for hiring home cleaners, in early 2014, and since then the company has expanded its services to over 130 cities. In December 2014, it raised US$16.8 million in funding to further push its international presence.

This March, it announced that it had expanded its footprint to the Middle East and Asia, along with the acquisition of Singapore-founded rival startup Spickify for an undisclosed amount – a move the company claims will establish Helpling as the largest player for on-demand household services in the island-republic.

The Spickify trademark will be rebranded as Helpling with immediate effect, and the company’s cofounder and chief executive officer Hoe Yeen Teck has joined Helpling as the new country manager.

Under the arrangement, the entire Spickify operations team will join Helpling Singapore. The other three cofounders – Steven Chan, Akmal Abdul Rahman, and Soon Yin Jie – will not be joining as they handled the tech component of Spickify, and Helpling has its own global development team.

“We are thrilled to embark on this new venture with Spickify’s team. They are the local hero in kicking off the first wave of this business model and will be able to provide valuable insights in propelling service excellence, tailored to the needs of the local community," Helpling cofounder Benedikt Franke said in a statement announcing the acquisition.

“Combining both our expertise will reinforce our position as a one-stop home-cleaning solution for all Singapore households,” he added.

In an email interview with Digital News Asia (DNA), Hoe said that Spickify started out as a community project in the Kembangan area where he lived.

The idea was to match low-income residents in the area with nearby condominium customers who needed home cleaning services.

“The pilot with the local community organisers was quite successful, so we decided to scale up across the country. The results were really encouraging and we did not expect the rate of pick-up to be so strong," Hoe said.

“Through this, we saw a need for this service – everyone needs a clean home, but not everyone wants to clean it themselves or have a full-time helper. Just as importantly, we thought that it was a good way for job creation for locals who are looking for jobs that can provide a high level of flexibility,” he added.

Spickify was incorporated in March 2014 and the service launched publicly in July 2014, as a completely bootstrapped venture.

“It was only after we launched and validated the demand that we started approaching investors. Along the way, we were also accepted into the Singapore Management University (SMU) incubator programme," said Hoe.

“We had quite a lot of interest from institutional and also angel investors, right up to the week that we finalised the acquisition deal,” he added.

According to Hoe, at the time of acquisition, Spickify had an estimated 150 cleaners in its database, which was increasing by about 10-15 per week. Since the public launch, the bookings rate has been increasing at about 20-30% week on week.

“Traction remained very strong and we often found ourselves limited by the availability of cleaners at certain times and job areas,” he added. According to Hoe (pic above), there are some 1.5 million households in Singapore, all of which have to arrange their cleaning in some way.

About one in seven households employ a stay-in domestic helper, but the other six households still need to find a way to manage their cleaning. Many will do it themselves, but a growing number, especially small households, are looking at hiring part-time cleaners.

“Smaller family units such as young professionals tend to use such services the most, due to the lower cost incurred compared with hiring a full-time live-in helper, along with a higher level of privacy.

“Even if we were to just look at, say, 10% of this market, that’s still a very significant number of households that need regular cleaning service,” he added, noting that the company currently serves a mix of domestic as well as expatriate customers.

Now officially rebranded as Helping Singapore, what makes it different from what already exists in the market?

“There are a few sites that claim to offer similar services, which have popped up in recent months. However, none of them has the same kind of platform to handle bookings quickly and efficiently for both customers and cleaners,” Hoe claimed.

Helpling is touted to be the “first and only service in Singapore” to allow customers to make and manage cleaning bookings in a fully automated environment.

Hoe said that this translates to the company having more resources to devote to things that count, such as customer service.

Apart from the convenience offered, the biggest challenge the platform addresses is finding good, reliable cleaners, not an easy task for an individual.

“That’s why Helpling exists, to undertake this for our customers. We have robust practices that we have deployed in so many countries. Of course, there are local adaptations, but our initial efforts have seen a lot of interest from our cleaning partners,” he added.

With a flat rate charge of S$20 (US$14.40) per hour for services rendered, it also lays claim to being the only service in Singapore to back every single cleaning made via its website with a S$1-million (US$720,000) liability insurance policy.

“Spickify was founded on the premise of providing customers with great cleaning and our cleaners with great support – this has not changed now that we are Helpling," said Hoe.

“Our goal is to become the top-of-mind, go-to platform for booking domestic/ home services. Our immediate focus is on scaling up our operations and to serve the home cleaning market, and to provide our customers and cleaning partners with excellent service support,” he added. Should Rocket Internet choose to cast its expansion eye towards Singapore's northern neighbour, one emerging rival would be MaidEasy – a current labour of love for local entrepreneur Azrul Rahim.

Azrul is no stranger to Malaysia’s startup scene. He is better known as the chief executive officer of Slashes & Dots and the co-creator of JomSocial, a social networking solution released in 2007 for websites running the Joomla content management system, used by over 160,000 websites around the world.

JomSocial was sold to US-based Joomla app development company iJoomla at the start of 2013 for an undisclosed sum, and since then, he has spent his time advising and investing in local startups.

“We used to have a full-time maid and quite often, she talked about her friends that earn more as cleaners – and then decided to run away.

“After this, we had a string of unreliable full-time maids, along with some crazy stories that a lot of Malaysians have probably heard before, including one case where a maid claimed to be possessed by a spirit in Cyberjaya … she could have just told us she wanted to leave!” he quipped. 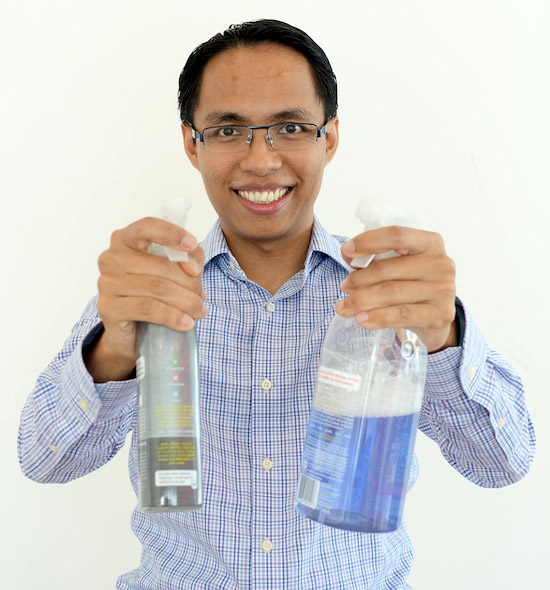 Azrul (pic above) and his family then switched to using the services of part-time cleaners, and loved the higher level of privacy that came with it.

“Using part-time maids from professional cleaning companies can minimise the risk of having unwanted incidents happen inside our household because we only see them once or twice a week, for a few hours.

“We met during at the 1337 Venture Alpha Startups programme last year, and she too had her share of horror stories with live-in maids,” Azrul said.

Prior to MaidEasy, Sim was an auditor with Ernst & Young Malaysia and the cofounder of Ministry of Clothes, an online boutique specialising in women’s apparel.

The platform was officially launched in January of this year and Azrul said that close to 1,000 cleaning sessions have been processed so far.

“Considering we only cover a small percentage of the Klang Valley, and that we're just over two months old, the response is encouraging and the problem we're solving is real,” he declared.

Azrul said that there a few factors driving the recent rise of services marketplace offerings in the country, with the first being the proliferation of mobile Internet access and smart device ownership.

The second is the growth of e-commerce, which has helped build customer's trust for online product services.

The third factor is what he described as “the MyTeksi effect” – much akin to “the Uber effect” in play in other markets around the world.

“The success of MyTeksi [GrabTaxi outside its home market of Malaysia] really helps in convincing cleaning companies to join the platform. They understand the value of being part of an online platform, and that helps online-to-offline service providers like us.

“We're able build the critical mass required on the supply side much faster,” he added.

Azrul declared that within Malaysia, MaidEasy currently doesn’t have a direct competitor with the exact same model.

“Of course, our current direct competitors would be the established cleaning company themselves,” he noted.

He shared that the plan for now is to stay focused on Malaysia, and on improving service quality and the quality of services of the platform’s cleaning partners.

“The goal here is to help our cleaning partner grow their business. On the consumer side, we want to make it easy for them, not only to book a home cleaning service, but all other cleaning services soon,” he said.

Azrul noted that there is “quite a bit of work” needed to scale to different parts of Asia, and the team wants to take it “one country at a time.”

The venture is currently self-funded, and his immediate focus is on building a profitable company.

“We are also actively looking for other sources of funding,” he added.

Asked about the challenges in growing MaidEasy, he said that it is an industry filled with pre-existing expectations.

““Customers want to be served and always want to talk to someone, which makes scaling hard. They mostly do not understand that we're not a cleaning company.

“It could either be a poor messaging on our part or customers simply do not want to care,” he lamented. 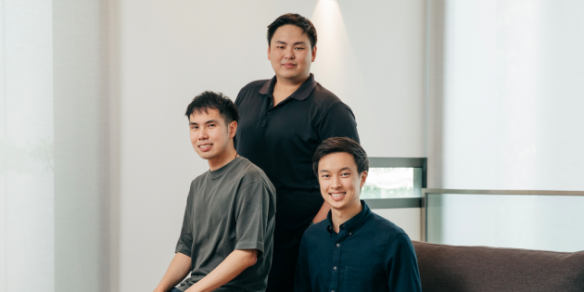