SINGAPORE-based design and lifestyle retailer Naiise launched its first overseas venture in Malaysia on June 1, as the first step to realising its ambition to become a global retail player. The omni-channel retailer has launched its Malaysian website and will officially open its brick and mortar retail space, which it calls its concept store, in August.

Naiise began in 2013 as an out of the bedroom of founder Dennis Tay (pic, above) with the aim of helping local designers access larger markets. Starting as an online-only platform, Tay states that the omni-channel business model was the plan from the very beginning.

Naiise started using pop-up stores in Singapore a year after opening, mainly to test the viability of the brick & mortar retail concept. The omni-channel model really started working in 2015 when Naiise opened its first concept stores.

“Being omni-channel was part of the long-term strategy. I never expected [the business] to take off, capture the market and gain traction so quickly,” he says.

Tay reveals that he harboured initial doubts about the omni-channel approach working, believing that it would only have worked 10 years previously, in 2003, but then turned out to be something of a first mover because Naiise was operating on the concept of enhancing the e-commerce experience with a physical space a few years before market influencers such as Amazon went omni-channel in Singapore.

The strategy has worked – Naiise has grown organically, is sustainable, and reached profitability within two years of starting despite not obtaining any external funding. 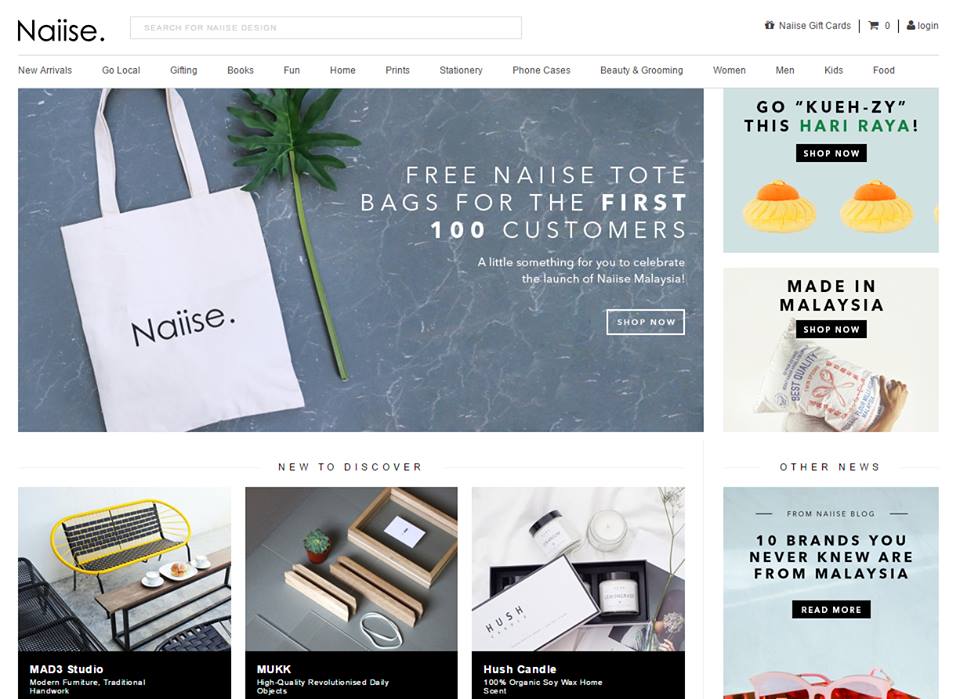 While opening a physical retail space certainly diversified the revenue channel, Tay says it had to be done because of the nature of the products that Naiise sells. “I realised that in order to capture the market and get customers to buy the design products, people needed to understand what design products really were. The physical stores really help enhance the understanding.”

As Naiise occupies a niche space in the middle of high-end luxury brands that only a few people can afford and very cheap products that the majority of people in Singapore and Malaysia purchase, education of customers and the correct avenue for that education are important for the startup.

“We felt this was the correct things to do to educate customers on the products they need in their lives. These are quality products that are not as pricey as the big luxury brands but are made with design thinking, heart and passion, and are sustainably sourced,” says Tay.

Naiise has six stores located strategically all over Singapore, and the startup has found that customers like to come to the stores to examine products they have seen online and then continue browsing through other products before making the final decision to purchase.

The omni-channel model does not only serve to educate potential customers; it also acts to enhance the convenience offered by the e-commerce platform.

Naiise offers a self-collection option where customers can purchase online and pick up the items at a store. This in turn serves to draw existing online customers into its physical spaces where they are able to touch, feel and read about products.

“Traditionally, physical retail spaces were seen as driving the main bulk of transactions, but coming from an online background we know how powerful e-commerce can be and we have always used the brick & mortar to enhance that,” says Tay.

He adds that Naiise was one of the first in Singapore to introduce retail entertainment to its physical retail spaces in the form of workshops that were part of the customer education process. Customers are able to engage with designers and these activities serve to build the community Naiise wants in terms of culture and customers – a community that understands and appreciates art and design.

Tay hopes this behaviour will continue in Malaysia, where Naiise will start with one concept store in Kuala Lumpur. According to Naiise Malaysia managing director Tan Wen Dee (pic, above), the startup will continue emphasising the lifestyle aspect of visiting the store in Malaysia.

The Malaysian store will feature a café and is open-concept so that browsing customers can see the Naiise team at work, which allows for direct interaction and engagement, and it will eventually put on workshops for customers as well.

However, Tay admits that though proven in Singapore, there is no guarantee this concept will work in Malaysia, and that Naiise is taking a big risk because it has to educate the market first before customer start buying.

He explains that a large part of potential customers are simply not aware that products such as those on Naiise exist – mid-range quality designer products. Singaporean customers had to and Malaysian customers have to be educated on the fact that it is more economical to buy a quality product with a slightly above average cost that lasts a long time than a cheap product that has to be replaced every few years.

“It’s a risk worth taking to help the creative industry,” he says.

Tay says he is willing to take the risk because he believes that it is the only way to provide opportunities for the creative industry to grow.

Currently, Naiise Singapore has 1,3000 designers on its platform and in its stores while Naiise Malaysia is starting with 50 brands, 30% of which are local (the rest are from all over the world, including some Singaporean brands already on the Singaporean platform).

“We don’t want to just bring all the brands over from Singapore and have a Singaporean shop. We want to support the creative industry in Malaysia and help it develop.”

Naiise wants to see the same domino effect it has seen in Singapore’s creative industry where the success of one local designer leads to successes for more and more local designers. Founder and illustrator of Malaysian design brand Whimsy Whimsical, which is on both the Singaporean and Malaysian platforms, Chan Yee Von (pic, above) says that Naiise was a catalyst for her businesses to scale bigger simply because of the quantity of orders it has brought it; she is unable to cope on her own as before and has had to hire help.

Chan says Naiise has had a positive impact on her business not just by enabling its growth but also because the company looks after the interests of the designers on its platforms by providing easily understandable systems of operation – important for creative minds unused to thinking in business terms – and shows clear appreciation of artistic endeavour, originality and creativity.

Naiise does not charge its designers any fee but takes between 30% and 40% of what they sell, which, Tay points out, means Naiise has a vested interest in making sure the products sell.

While Tay says that growth for Naiise and the brands under its wing is important, knowing the right time to scale is even more so. “Coming from a bootstrap background we understand growing the business organically and importance of running a sustainable business first.”

Increasing the number of brands on the Malaysian platform will therefore be parallel to the growth of the Malaysian branch and team.

Tay declined to provide targets for growth and revenue, saying that Naiise does not operate on fixed KPIs but prefers working to the best of its ability. Tay and Tan do, however, say that Naiise Malaysia does have the potential to reach profitability in two years just as it did in Singapore.

Naiise’s ambitions do seem to be growing exponentially; the startup plans to launch in the UK in the fourth quarter of this year. Naiise already has a solid customer base in the UK, which is why it is venturing so far afield – the UK is currently its second biggest market. Establishing a foothold in the UK will then open up markets in Europe and beyond.

“Essentially, we see this as the development of our creative markets in Southeast Asia. That’s what we want to focus on,” says Tay.