THE online retail space in Indonesia has certainly seen its share of new players in the past few years, and Muslimarket.com is no exception – except, perhaps, in a lot of the details, including its intention to comply with Sharia or Islamic law.

The online marketplace was founded by former finance professional Riel Tasmaya in June this year, ahead of the Muslim fasting month of Ramadhan and the festive season of Eid Mubarak (or Hari Raya Puasa in Malaysia).

That soft launch was to take advantage of the prime shopping season for Muslims, but now Muslimarket.com is gearing up for a grand launch in December, Riel told Digital News Asia (DNA) in Jakarta.

He declined to how much was invested to launch the online marketplace, but was optimistic of the business.

“Indonesia has the biggest Muslim population in the world. It is a very big market,” he said.

“However, this potential market has not been empowered optimally,” he added.

According to Riel, many e-commerce companies only focus on selective markets or merchandise for Muslims, instead of providing a one-stop online shopping experience.

“We are here to fill this void – we provide for all of the needs of Muslims, from fashion products cosmetics, and accessories, to religious supplies for worship,” he said.

“In addition, we will be channelling part of our profits for the empowerment of the people as well,” he added. 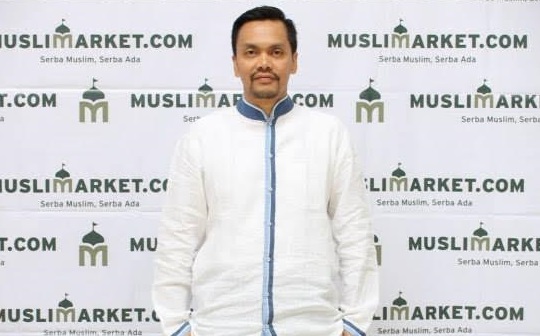 Muslimarket.com is targeting Indonesian Muslims by linking their shopping experience with their religious and emotional bond, according to Riel (pic above).

“We want to increase their emotional connection with Islam, while shopping. Muslimarket.com ensures all products provided on our platform 100% halal (kosher).

The company has applied for certification from Indonesia’s National Shariah Board (Dewan Syariah Nasional). If this is approved, Muslimarket.com will be the first and only Sharia-based e-commerce portal in the republic.

Riel is aiming for the certification to be issued by the time it holds its grand launch.

“This will differentiate us from others. We also guarantee that in our team, there will be a Sharia Supervisory Board which sorts out all the products and makes sure everything, including the process of transactions and payments, is in conformity with Sharia law,” he declared.

Muslimarket.com is not just about shopping either. Customers can also make Sharia-compliant donations on the platform, and these donations will be distributed to authorised Islamic foundations and agencies such as the National Zakat Agency (Baznas) and Dompet Dhuafa (Wallet for the Poor).

In Islam, donations or ‘infaq’ in Arabic, is an act of worship when Muslims spend some of their money to help those in need.

“We are not merely an online portal for shopping but also for worship,” Riel said.

In cooperation with Baznas and Dompet Dhuafa, Muslimarket.com will also be providing animals for ritual sacrifice for the Muslim festival of Eid al-Adha (Hari Raya Haji in Malaysia).

“We’re working with Muslim goatherding cooperatives – the animals bought by our customers will be directly channelled to Baznas and Domper Dhuafa, which will distribute them to communities in need,” Riel said.

Baznas and Dompet Dhuafa are recognised in Indonesia as credible institutions that handle infaq and sacrificial animals donated by Muslim individuals and organisations.

Riel said that Muslimarket.com provides sacrificial animals not only during the Eid al-Adha, but throughout the year to serve the demand for the aqiqah tradition, a ritual symbolising gratefulness for the birth of a child.

However, despite the variety of its products and services, fashion still predominates on Muslimarket.com, as it does with other e-commerce portals in the country.

According to the Indonesia E-Commerce Association (idEA), 78% online shoppers look for fashion products. Other items in high demand are smartphones (46%) and tablets (43%), as well as a host of other electronic devices.

“Around 60% of our products are in the fashion category,” Riel said.

Since its June launch, Muslimarket.com already has more than 100 partners, with nearly 4,000 products displayed on its storefront.

While most of these are fashion products, Riel aims to widen the portal’s portfolio in areas such as products of worship, sacrificial animals, home interior equipment, and packages for Umrah and Hajj pilgrimage.

“Our target is to supply all products and services related to Islam,” he said. “Next year, we aim to be recognised as the largest shopping portal for Muslims in Indonesia.”

And the company does not intend to stop there, either.

“In the next three years, we are targeting to hit Malaysia, Singapore and Brunei. We have also begun to build contacts in Turkey and the United Kingdom, which also have large Muslim populations,” Riel said.

But these overseas plans will only be carried out after Muslimarket.com has become a well-known brand in its home market of Indonesia, he said. For now, the goal is maximum penetration in the republic.