MAGNUS Games Studio – the game development studio behind Re:Legend - announced on March 15 that the company has entered a worldwide publishing agreement with Italian game publisher and distributor Digital Bros S.p.A., through its subsidiary 505 Games  S.p.A..

Speaking at the ceremony, Magnus co-founder DC Gan said that the company is excited to be working with Digital Bros.

“It is an absolute honour for a budding studio like Magnus to be partnering a major publisher such as Digital Bros. We are thrilled with the market opportunities for Re:Legend that this worldwide publishing agreement brings.

“We worked hard and poured our passion into making this game enjoyable for our supporters and fans, and we hope to bring the game to the next level through our experience working with 505 Games and Digital Bros to grow Re: Legend into a global franchise and at the same time mature into a leading player in our region.”

Re:Legend first made waves among the gaming community when the company broke the record with a 99% upvotes on Square Enix Collective – a curated platform that enables creators to post ideas, and gamers to judge whether those ideas should become a reality.

Inspired by cult-classic farm simulation game Harvest Moon, Monster Rancher and Stardew Valley, the game is described as a monster-raising RPG that allows the player to raise magical monsters, known as Magnus; train in farming and fishing; build a village; and play co-operatively with other players.

Convinced of the marketability of the game, brothers and co-founders DC Gan and Welson Gan ran a month-long Kickstarter campaign in July 2017 which was a success as the project surpassed its target of US$70,000 (RM272,843) in less than 24 hours, achieving 900% funding from backers all around the globe by the end of the campaign and making it the most crowd-funded game in Southeast Asia in 2017.

Praising the game as a detailed and creative game that would appeal to both casual and serious players, Raffaele Galante, chief executive officer of Digital Bros said, “We have strongly believed in this project far before the beginning of the Kickstarter campaign and we are very pleased to finally have the chance to announce it here with Magnus Games Studio and the support of Malaysia’s MDEC.

“It is a promising project with passion, novelty, and creativity. Our cooperation with Magnus Games Studio on Re: Legend further confirms our footprint in Asia and our increasing focus on Asian markets, where expectations from fans for games are proving to be very high.”

According to games market intelligence research house Newzoo, there are 2.2 billion gamers across the globe, generating an estimated US$108.9 billion (RM424 billion) in game revenues in 2017, with Asia-Pacific contributing to at least a quarter of all revenue.

On digital distribution, Steam shared August last year that it now counts 67 million monthly active players, largely from Northern America and Western Europe, with users in Asia fast catching up with the trend.

This vast opportunity in digital distribution is a boon for Magnus that had a humble beginning as a two-man project back in 2015.

The company today consists of 20 people and is based at LEVEL UP Inc, an incubator space for games development created by Malaysia Digital Economy Corporation (MDEC) to support the games creation industry in Malaysia.

DC added, “We dared to dream big with Re:Legend and we couldn’t have done it without the support from our fans who gave feedback and helped shaped the game. We are also truly grateful to have the support from MDEC in providing us with the industry exposure – locally and internationally – to make this game a reality for many of our fans around the world.”

Representing MDEC at the event, Ng Wan Peng, chief operating officer of MDEC congratulated both companies on the newly sealed agreement, “It is another truly ‘Malaysia Boleh’ moment for us and further proof that MDEC’s endeavours are bearing fruit. We have often lauded local studios and their capability in delivering world-class IPs, so we are extremely proud that Digital Bros shares the sentiment about Magnus and Re:Legend.

“On behalf of MDEC, we congratulate Magnus for landing this major deal and putting Malaysia another step closer to being the preferred regional hub for games development and delivery by 2025, an inspiration that is in line with our Digital Economy initiative.”

For more information on Re:Legend, visit the game’s official website at https://www.play-relegend.com/ 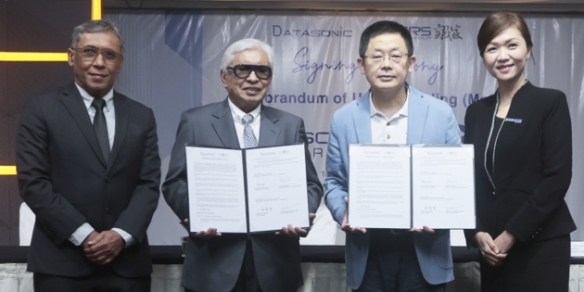