IN a Digital News Asia (DNA) exclusive, Joel Neoh (pic above) has confirmed what we have heard from sources: That he has left Groupon, the US-based e-commerce company he was with for four-and-a-half years.

March 18 was his last day at the company, with Neoh signing off with an email to his team (see end of article).

The announcement came as a shock to quite a few people in the 1,500-strong Groupon group in Asia, where Neoh had been their leader by virtue of being Groupon’s international vice president for Asia Pacific.

With his resignation, Neoh can now stop living vicariously as an entrepreneur through the eight startups he has invested in as an angel over the years, in Hong Kong and Malaysia, and as a limited partner investing into 500 Durians, the South-East Asian fund started by Silicon Valley’s 500 Startups.

Neoh told DNA that he is excited over what is happening in the ecosystem and wanted to get back in the action.

“Malaysia is also positioning itself nicely as a startup hub for Asean, and I feel it is time for me to build an Asian business from Malaysia and make Malaysia proud,” the 32-year-old said.

While he is not ready to talk about what vertical his startup is in, he did say it would involve some form of e-commerce and will be around a combination of services and content.

“We have started working on an MVP (Minimum Viable Product) and I am building a team now. I will have more to share in a few weeks’ time,” he said.

Thanks to Neoh’s track record as an entrepreneur, funding will probably not be an issue for him. He was a cofounder of Groupsmore, which Groupon acquired as part of its entry into the market here; and also a cofounder of Says.com, the crowdsourced content broadcasting platform that was merged with select Catcha Media subsidiaries to form Rev Asia.

His cofounder in both Groupsmore and Says.com was none other than Khailee Ng, currently a managing partner at 500 Startups and the driver behind 500 Durians, as well as a DNA Digerati50.

And Neoh has won international recognition too. In 2013, he was named a member of the World Economic Forum’s Young Global Leaders (YGL) Class of 2013, joining young achievers such as Chelsea Clinton and other Malaysians such as AirAsia’s Tony Fernandes, CIMB Group’s Nazir Razak and Genting Bhd’s Justin Leong Ming Loong.

“Raising funds too early is not necessarily good – I have seen many Malaysian companies raising funds right away, and in the process diluted themselves,” he said.

Neoh’s game plan is to raise enough funds to scale quickly. “I can do this through friends, family, previous investors in Groupsmore and Says, and even personally.”

The key challenge for him in these early days is to get his MVP out and “build something awesome.”

“It is about getting the value proposition right, getting traction, and getting customers,” said Neoh, who added that he has learnt a lot about scaling up an e-commerce business in Asia while at Groupon.

His almost five-year tenure at Groupon surprised those how knew him well. And Neoh acknowledged that four-and-a-half years is a long time for an entrepreneur to be in a company.

But being surrounded by managers who were entrepreneurs themselves, and with the regional role he had, he said he found Groupon to be “addictive.”

But that addiction has worn thin and Neoh has jumped right back in the startup space, determined to have fun while building an Asian business from Malaysia.

Neoh is scheduled to deliver the opening keynote address today (March 19) at the Cradle Buzz conference organised by Cradle Fund to bring together Asean startups to discuss regional entrepreneurship issues. 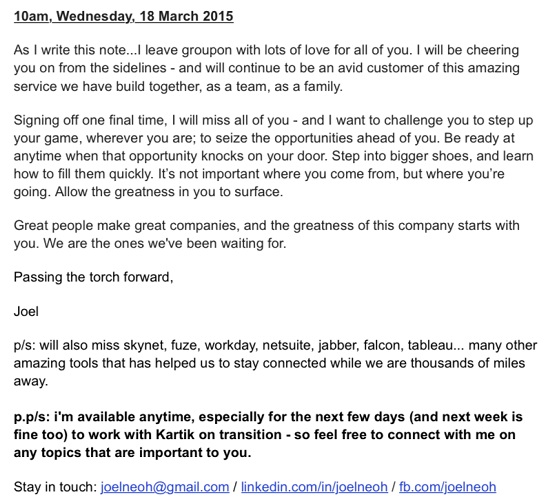