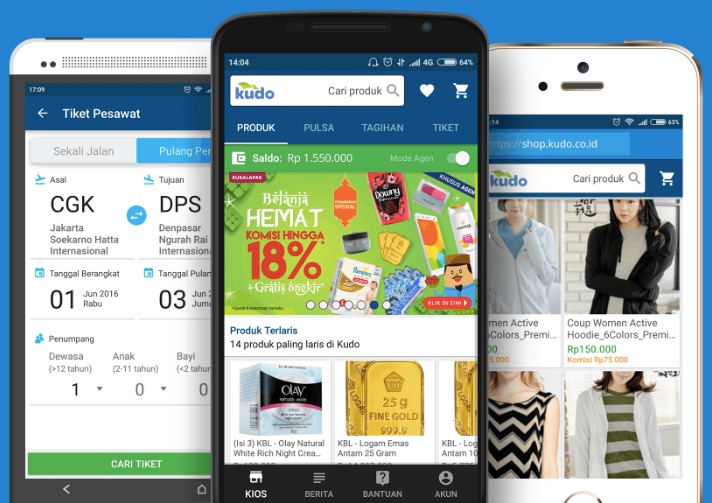 WITH more than 17,000 islands scattered across the archipelago, doing business in Indonesia is not as easy as it sounds, especially when it comes to e-commerce.

“It is true that most of the country’s population are in urban cities. However our main task is to pursue economic inclusion. This means that we need to work harder to develop non-urban areas and try to give equal access to goods and services to people in rural areas. That is the philosophy behind our company,” said the chief executive officer (CEO) and co-founder of Jakarta-based startup PT Kudo Teknologi Indonesia (Kudo), Albert Lucius.

Kudo, which stands for ‘kios untuk dagang online’ or kiosks for online trading, is an online to offline (O2O) technology platform that connects online merchants and e-commerce players with offline customers through its network of agents. Albert (pic, right) said that the September 2016’s investment round was enough to boost Kudo to grow faster in terms of technology and workforce. It currently has 350 employees from an initial team of 11, 100 of whom are in the tech department.

“We do have a presence in tier one and two cities, since not everyone in those big cities is in the middle to upper income class. However our model works well in the small areas as it solves the problem of limited access to goods,” Albert told Digital News Asia (DNA) in a recent interview.

Albert added that the proportion of tier three and tier four cities’ agents is now close to 50%, but the startup aims to increase this figure to 90% compared to tier one and tier two cities.

“The more rural your base is, the wider the market you can open,” he said.

Kudo is currently partnered with 25 e-commerce players in the country, and says it has millions of products aggregated and curated from these online players.

It is also partnered with big fast moving consumer goods (FMCG) companies and producers such as Unilever, P&G, and even Samsung to help disburse more products to offline customers.

“Basically each agent and areas has specific products of the month, their favourite, and what we want to do is to ensure that we have wide range of products to provide to offline customers, and we want agents to be loyal and increase their transactions with us,” he continued.

“Our focus this year is to ensure our application runs smoothly even on a low resolution phone. We want to ensure that our agents are happy with the app, service, and with Kudo so they will continue to sell digital goods through our platform,” Albert said.

Kudo will also focus more on curating the best products and filtering non-active sellers, in order to give other active agents the best service they can get. While many people think that Indonesia is ready for an e-commerce wave, Albert argued that it is only happening in the capital city of Jakarta, where all the businesses activity is located, and that is not the true Indonesia.

“The true Indonesia is when you drive about an hour outside of Jakarta, and you start seeing the real people gather, sit, and talk at the side of the road, with limited and even no access to the internet, where they watch their little TV together in a small kiosk.

“These are the true faces of Indonesians. Most of them do not have bank account, or even if they do, they have no idea how to use the internet to shop online. These people need someone, something to help them go online,” Albert argued.

He also argued that the smartphone and internet penetration numbers do not translate into better e-commerce adoption, as long as people do not know how to use the internet and their smartphone to do more than posting on social media or consuming information.

“So in order for the country to reap the benefit of e-commerce, there is a great need to build the bridge from offline customers to online shoppers, and this cannot be done fast. A mix with traditional ways of trading is needed to earn the trust of the majority of the people,” he added.

By using the power of an agent network, Kudo aims to slowly convert more people to shop online, while waiting for the country’s e-commerce network to mature especially in the payment department. Kudo’s agents work to reach offline customers. Agents need to register themselves with Kudo through an Android app, add some money to their agent accounts, and start selling goods to their customers.

Basically the agent acts as a middleperson, and needs to invest his money first to buy the digital goods provided by Kudo. He then collects the money from offline customers.

Agents can either order by demand, or aggregate all orders from their offline customers and place one order to save shipping costs. It all depends on the type of customer the agent has in their area. Typically, one Kudo agent can handle up to 30 offline customers.

All agents work by commission. The greater the value of transaction they bring to Kudo, the higher the commission. Agents can also refer another person to become an agent, although only the first referral gains points, unlike the multi-level marketing model.

“If for example you just want to be a Kudo agent to supply goods to your family of five constantly, you can. But the bigger your order, the higher the commission you will receive,” Albert explained.

Kudo started off as a classroom project by the co-founders in thr Haas School of Business at UC Berkeley. At that time, Albert and Agung Nugroho, Kudo’s co-founder and chief operations officer (COO), were trying to see what they could do to improve the life of the country’s middle- to low-income population.

The duo came up with the idea to introduce machines where people can order things from tickets, to food, to many other goods.

“At first we were inspired by this fancy machine that we found in Taiwan and Japan when we travelled there. People can order almost anything from that machine. So we thought, this might be the right solution for many Indonesians too,” Albert said.

So Kudo started as a kiosk business in July 2014 by providing these machines and partnering with convenience stores, malls, and shopping centres. However Albert admitted that business did not go well at all.

The duo then went to their main customers and asked why they did not want to use the machine to shop online and order goods. The answer was fascinating. The people said they did not trust machines and some were intimidated by them.

Having failed in their first attempt, the co-founders then went back and redefined their business by taking away the machines and putting the technology in tablets with the help of sales promotion girls (SPG) who promoted it to people.

“The second attempt worked well. We did the exact same thing, promoting online products to offline customers, except this time with a person walking around with a tablet selling digital goods,” he continued.

From there Albert said, the duo learned that most of Indonesians need the element of trust in order for e-commerce to work. People still need the social and direct personal touch in order to purchase something

“We have evolved a lot since then, and now we have migrated fully to an app model. We have our web app, as well as Android app,” he said.

Kanopi out to spark a microfinance revolution in Indonesia