IF there is one thing that isn’t a problem for startups under the care of Microsoft Ventures’ accelerator programme in Beijing, it’s funding.

Or so says Frances Du (pic above), director of the software giant’s startup investment and accelerator arm in the Greater China Region, speaking to the media during a recent familiarisation tour hosted at the company’s office in Beijing.

“Money could be a problem for a generic startup – but not for startups with us, as we’ve gained a reputation that only the best get accepted into our programme.

“When you have this reputation, only the confident or the best will apply, and that acceptance becomes a validation of sorts when talking to potential investors,” she claims.

For the most recent batch of Microsoft Ventures startups, its sixth in the three years it has been active in Beijing, the team received over 700 applications and extended invitations to 21 teams – an acceptance rate of 3%.

Du also highlights that Microsoft Ventures “pours in a lot of resources” of a non-monetary nature, such as mentorship, marketing, human resources consulting, and term sheet vetting to ensure that portfolio companies have a high chance for success.

“We’re not a charity organisation, we only work for the best startups – so for our companies, we don’t see an issue for them to raise funding.

“But in general, we’ve seen a huge increase in venture capital (VC) investment globally, and last year 50% of all VC investments in China were in Beijing-based companies,” she notes.

In a Wall Street Journal report, research firm VentureSource said that investors poured US$15.5 billion into deals in 2014, more than twice the previous record of US$7.3 billion set in 2011.

In the fourth quarter of 2014 alone, investors injected US$6.8 billion into Chinese venture-backed companies, an almost fivefold increase from the US$1.4 billion invested in the same period a year earlier.

According to the Microsoft Ventures team, there are approximately 1,600 accelerators active in the country and about 1.2 million new companies were registered in the first four months of 2015.

Almost 3.6 million new companies were registered in 2014, 46% more than the year before, according to government data.

Over at InnoWay, a ‘startup street’ in the Zhongguancun area, home to many of the country’s top tech firms like search giant Baidu, web portal Sina and multinational corporations such as Microsoft, a reported 40 startups are born every day. Du shares that the recent boom in the number of startups can be credited to the success stories of Chinese companies such as Alibaba, whose founder Jack Ma (pic) is now the country’s richest man. He is worth around US$21.8 billion and began his career as an English teacher making US$12 a month.

“In the past, being a startup founder got you a lot of questions about finding better jobs and whether there’s any future in it,” says Du.

“These success stories have shown good examples to new graduates and even older people who are looking at entrepreneurship.

“There’s been a shift in the culture – while in the past being a government official was the top choice for many, being an entrepreneur today is the new desired job.

“This has been helped by a lot of media publicity of tech celebrities and support from the Chinese Government with its slogan of ‘startup everywhere, innovation everywhere’ which was launched last September,” she adds. Microsoft Ventures’ impact in China appears impressive. Du reports that since its launch in 2012, the accelerator now boasts 106 portfolio companies, with more than 90% of them having successfully raised funding.

Collectively, these portfolio companies have 300 million consumer users and a valuation of US$ 2.5 billion.

“In the last three years, nine companies been acquired and one, a big data company, has listed on Shenzhen Stock Market's New Third Board,” she adds.

With regards to a demographic breakdown of entrepreneurs that have come through its programme, Du says that it ranges from a 17-year-old dropout working on an augmented reality mobile app, to a seasoned businessman in his late 50s venturing into the digital sphere from more traditional sectors.

Men dominate the ranks but there are also strong female entrepreneurs in the mix, she adds.

The types of startups that apply also reflect broader industry trends, with the inaugural batch featuring more consumer-centric solutions, followed by a larger percentage of enterprise-focused startups in the second batch.

“The third batch saw a lot of big data and analytics companies, the fourth had many Internet of Things (IoT) teams, and the last two batches saw a big number of startups doing work in the areas of machine learning and computer vision,” she shares.

The Microsoft Ventures team’s approach to evaluating potential startups is no different from how a typical venture capital firm would vet a potential investee, says Du.

“The first thing we look at is the team, their potential, track record and team dynamics. The second is the target market – does it address a real problem and what is the addressable market size for it?

“The third is the technology advantage – now, this is not about how advanced your solution is or about intellectual property or having a global patent, though that will be a good plus.

“It’s more about whether the team can build a competitive advantage from the technology being used.

“A solution that is hard to copy would be great, since nowadays having a smart idea doesn’t mean others can’t copy it, but we look at how technology use can give the company that advantage in a competitive space,” Du explains.

Success is also measured and defined in multiple ways, the first being a startup’s ability to survive – be it via revenue earned or amount of funding raised.

“Then it’s about how many customers – is it 100 million users or a good number of paid enterprise users? Another milestone is when the startup exits via an acquisition or gets listed,” says Du.

A big benefit for startups applying to Microsoft Ventures is the unique position the multinational plays in having the resources and reach to help founders grow beyond China and become global players, she claims.

Of course, it also helps that the software company is also the provider of the first and only foreign public cloud platform in China – a significant factor for companies looking to seamlessly scale up as they grow internationally.

Keys to the kingdom

But Microsoft Ventures is also positioning itself as a gateway to the massive opportunity that is China, though currently only 10% of its companies claim international origins. However, Du notes that the number of foreign founders based in China is higher.

It is not necessary for a startup to be incorporated in the country to qualify for the Microsoft Ventures programme, but it must be an incorporated entity with documentation to fulfil regulatory and compliance requirements.

Du says that a large part of the evaluation process for potential startups is how much value the team can truly add to the process, given its position and resources.

“If startups are looking to target the China market, then we can help there as we have a lot of resources and can facilitate introductions and customer engagement,” she adds. 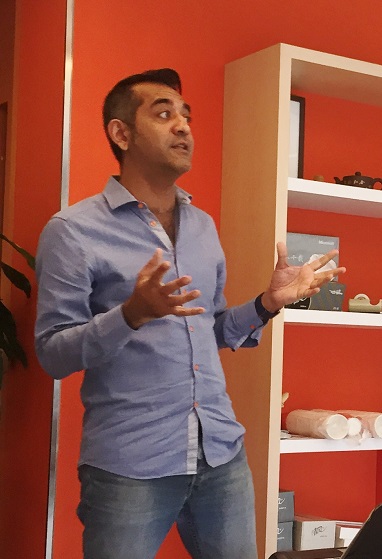 One such startup that has leveraged on this offer is MyHero Ltd, developer of the TradeHero financial learning and stock market simulation app, originally founded in Singapore.

In his presentation to media, chief executive officer Dinesh Bhatia (pic) shared that raising its Series A round of US$10 million from Chinese firms Kleiner Perkins Caufield Byers China (KPCB China) and IPV Capital highlighted the interest and potential for its app in China.

“This was even before we had an office in China. In December 2013, we were accepted into the Microsoft accelerator programme.

“The team really helped us in terms of scaling our tech infrastructure and building it out – one significant change was shifting our database structure to an unstructured one leveraging Hadoop,” he adds.

With consultation from Microsoft, MyHero launched its first office in Shanghai in May 2014, to be closer to the fintech-centric markets in the region, and at the end of 2014, launched the China versions of the app for the iOS and Android platforms.

Outside of China, MyHero’s largest markets are Singapore, Indonesia, India and the United States, with an average of 100,000 to 150,000 users from each country.

Dinesh says that the target is to hit eight million registered users globally by year-end, which he describes as “doable” given the large domestic market, coupled with the emerging trend of larger Chinese companies returning to relist on the country’s stock exchanges – and the foreign investors that would follow suit.

For now, TradeHero remains a free platform, focused on increasing its overall user base, with the team evaluating multiple options for monetisation.

As MyHero sorts that out, the Microsoft Ventures team intends to be there to help.

“For all our portfolio companies, we want to be their coach and companion on their way to becoming a significant company,” says Du.

“We want to be the one they work together with to fight the challenges in growing a business,” she adds.

Gabey Goh reports from Beijing, China at the invitation of Microsoft Asia Pacific. All editorials are independent.