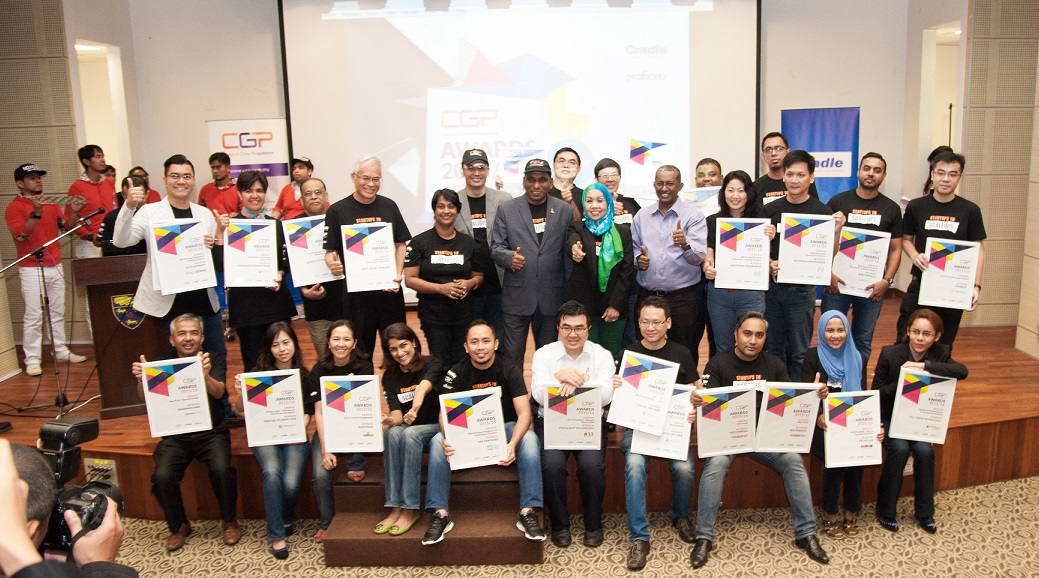 Also at the event was Secretary General of Treasury Mohd Irwan Serigar Abdullah, who announced that the government will continue to provide funding to CGP this year, though the amount – RM4 million (US$895,000) – will not change.

“Last year was a challenging year, but this year we are going to do a lot. It will be a good year,” he predicts.

CGP, which started in 2011, is designed to bring together key players in the entrepreneurial ecosystem to provide entrepreneurs the support to scale their businesses. At the conclusion of the third season of the programme, CGP has helped a total of 366 companies and 1,235 entrepreneurs.

According to CGP’s chief coach Dr V Sivapalan, the idea behind running such a coaching programme is to provide a real impact that short term courses cannot. “While short term programmes pass on knowledge, they don’t actually help companies to grow by helping them implement what they have learned.”

CGP has one of the largest number of coaches coaching entrepreneurs at 73 coaches, along with 88 external trainers. Sivapalan also pointed out that there are 60 CGP alumni who returned to provide training and experiential sharing, something he is proud of.

Proficeo co-founder and CEO Renuka Sena said that individualised coaching assists entrepreneurs at any stage of their business’ growth to build sustainable scalable businesses and go on to successfully raise funds for growth.

CGP tracks the growth of companies using market leading indicators such as their revenue and other customer metrics to help them scale. To date, CGP graduates have collectively generated US$285 million (RM1.27 billion) in revenue, with many doubling their growth during and post coaching.  Of this, US$33.3 million (RM148.2 million) is export revenue. CGP companies have successfully penetrated 92 export markets since the programme’s inception.

There are two types of companies in the CGP programmes: startups, which are very early-stage companies, and scaleups, which already have products in the market and customers and are now growing. Ninety-six percent of the revenue generated was by scaleups.

“Startups are important but we have to move them to the next level. That’s our role in the CGP – take startups and move them to scaleups. Scaleups are the ones that generate the most revenue,” said Dr Sivapalan. “This is only possible because all CGP coaches are entrepreneurs, investors or senior management from corporate Malaysia who have first-hand experience of how to build companies from the ground up. It is this advice and guidance that is invaluable at accelerating the growth of Malaysian tech companies,” he said.

Sivapalan explained that the increase is due to the fact that for CGP3, more focus was given to helping companies go overseas. “We will continue to focus on this to help our companies regionalise.”

Though not a key performance indicator, CGP also tracks how much funding its companies raise. CGP companies have raised US$72.1 million (RM321.4 million) over the three seasons – 25% by scaleups and 75% by startups.

“This is very good, because you have to fund the startups to move them up to scaleups,” said Sivapalan.

CGP3 is the first time private funding has surpassed public funding, showing that the private sector is putting more money into CGP companies. “It is interesting to note that we are doing and the government is doing to get more private investors is working,” said Sivapalan, adding that things like the government-approved tax incentive for angel investors and equity crowd funding also do help.

“I personally believe that companies should only depend on the government for funding sometimes; when you have a prototype and it’s risky, go to the government. When you want to grow in scale, you should move on to private funding,” he shared.

“Entrepreneurship is the way forward,” agreed Irwan. “I am giving a lot of time to entrepreneurship because I truly believe that Malaysia has the resources and the people to make it work. He added that as the government takes the economy forward towards the goal of achieving a GDP of RM3 trillion in the next seven years, it needs the support of entrepreneurs to grow the economy.

Speaking Malaysia’s ability to succeed in the international arena, Irwan said: “We are credible and we are incredible.”

Applications are now open so please register your interest to apply for CGP Season 4.

Related Stories:
Turning Malaysia into the ‘go to’ entrepreneur hub
Daring to go against the norm – and reaping the fruits
Cradle hits 32 co-investment partnerships, plans to go direct as well from 2017
Entrepreneur coaching not just for young startups: Proficeo