IN a sign that the startup ecosystem is increasingly attracting a wider pool of entrepreneurs besides those bright eyed graduates, the recent Malaysian graduating batch of Alpha Startups, a regional pre-accelerator programme run by 1337 Ventures, not only saw more experienced executives jump in, but had more female entrepreneurs than males.

“With each batch, the level of applicants are significantly improving. We’re seeing more domain experts attempting to launch products to significantly expand their businesses. From the likes of an accountant attempting to build a micro SME focused tax and accounting system to a launderette owner, Elmi Haryadi Daldiri attempting to find new ways to scale his existing business through DobyBox,” said Bikesh Lakhmichand, founding partner of 1337 Ventures.

The quality of the intake made for good pickings for 1337 Ventures which picked 3 teams to invest into.

The current batch also managed to attract additional investments via aspiring and existing angel investors in Malaysia and Japan with 1337 Ventures excited to have Andy Sitt from 123RF co-investing with it into HomeTaste. Meanwhile, the team from Bayar secured additional funding from undisclosed angels from Seek Asia and Google Japan.

Out of the 20 teams that were accepted into the programme, 11 gained entry to the demo day of which more than half were ideation stage with no minimum viable products and the remaining had basic prototypes. Alpha Startups also welcomed guest speakers from other growing startups, as well as corporations and successful investors during the five day programme, among which included The Lorry and Favful which instantly connected with the Alpha batch startups on the struggles of creating a startup from nothing, growing rapidly, and maintaining the quality of their service; all with an extremely lean budget. Corporations like Facebook, iPay88, and Lim Jo Yan & Co also came in to train and coach startups on their domain expertise.

“I’d recommend it to anyone, from someone who has an idea, but doesn’t know how to solidify it, to someone who already has an idea simmering for some time, but it hasn’t really taken off… Alpha Startups can definitely take their ideas to the next step,” remarks Hannah Azuree Ryan Daud, cofounder of Bayar.

“In the journey of building a startup, support is always needed. When you come here, you meet people exactly like you, so you feel like you’re just at home and everything here is just perfect.” said Soh Tian Cheng, cofounder of HomeTaste.

“Sometimes an early stage startup needs connections and access more than money. We’re glad that some of the mentors that dropped by not only gave advice but also helped open doors. In the case of DobyBox, the founder gained access to pilot his service in two new locations.” said Bikesh. 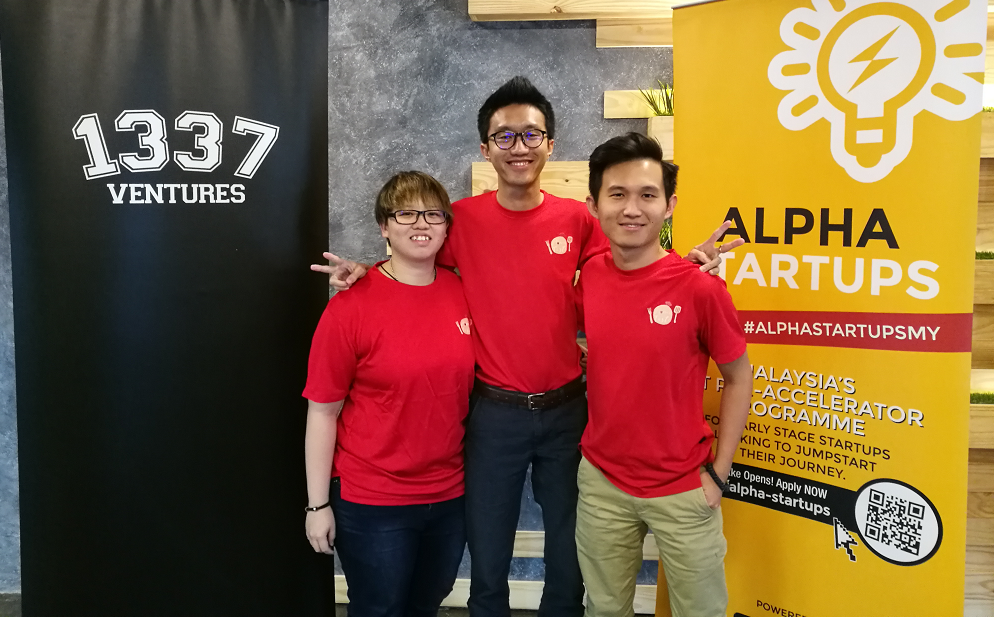 One participant, Parmeet Kaur, an ex-Googler, now running a Joyed, a startup that links carefully selected skilled artisans in Asia and their hand made creations to the global market, feels she got a lot more out of her Alpha Startups experience than she expected. "It was an opportunity to validate and solidify ideas while identifying ares that need to be improved on while gathering priceless feedback from mentors who have built successful businesses across various industries."

The Demo Day gathered investors from various local and international VCs, angel investors and aspiring corporates like Digi that are taking an interest in working with startups.

"We are inspired to see HomeTaste progress further in their quest to liberate urbanites in search of local meals on demand. They were graduates of the inaugural Digi Incub8 programme in partnership with Alpha Startups, which was aimed at nurturing early stage ideas from East Malaysia. This team and other recent graduates of Alpha Startups have proven that there is plenty of promise in young Malaysians launching viable businesses." said Praveen Rajan, Head of Digi-X.

The next intake of Alpha Startups will be focused on the game development vertical and jointly organized with Media Prima Labs and with the support of Malaysian Digital Economy Corporation and Digi. Any aspiring game developers can send their video applications via http://bit.ly/alpha-games