THE APICTA regional competition was the brainchild of Malaysia and over the years it has grown and become more prestigious.

Malaysia returned home with seven awards in 2013, out of which, three were winners in their categories. This is the best result for Malaysia since 2010, when the international leg of the competition was held in Kuala Lumpur and Malaysian nominees won 10 awards in total (six wins and four merits).

Since then, in 2011 and 2012, we have returned home with 10 and nine awards respectively, but with only one winner, the rest being worthy merit wins.

The following companies won awards in Hong Kong and these are their stories. The product it submitted for the competition was its NFC (Near Field Communications) Tag in Sim Card.

With MDT’s SIM card, all phones – whether smartphones or not – can have NFC capability. Current solutions available in the market are SIM Passes (devices that are external add-ons to your phone) and NFC stickers, NFC on SD cards, etc.

MDT demonstrated how each of these alternatives have limitations from signal interference, or whose usage is confined to certain types of phones only, and generally, don’t have a clear path to monetisation by telcos.

MDT’s innovation however does not require customers to have a handset upgrade and more importantly, allows telcos to provide value-added services that NFC offers like mobile wallets and so on, to all their customers and not just a small percentage that have phones with the capability.

I probably have not done full justice to its innovative solution as there are also many other aspects which are truly remarkable, but in view of the fact that I MDT has patent applications in process, I thought it better to err on the side of caution and not reveal too much. 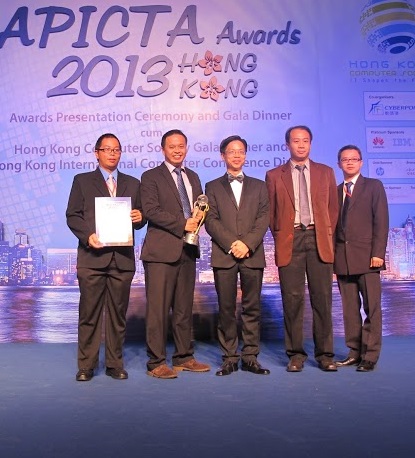 Now this was an impressive product. Movertech is tackling the garment industry and in particular factories. The problem in this industry is that the production line has to be dynamic to cater to multiple designs, and quick turnaround times are required.

However, each change in the type of fabric or other raw material used, and different designs, require a change in the production arrangement on the factory floor. This results in downtime and money lost.

Enter Movertech with its amazing technology which was developed after being inspired by LEGO blocks. The Movertech team was from the industry and therefore understood the challenges well.

It developed a system that was based on the LEGO concept of building whatever you needed and fitting pieces together quickly so as to swiftly change the production line on the factory floor. How cool is that!

Malaysia actually did well in this category, bagging two awards. Telekom R&D was a merit winner at APICTA for its technology on Ultra Long Reach Repeaterless Terrestrial Transmission System.

Yes, I know, that’s a mouthful. In a nutshell, the inhouse R&D team at Telekom Malaysia developed a technology that would allow the company to make inroads into underserved areas without having to incur huge costs in capex and opex (capital and operational expenditure).

The technology is as described – Ultra Long Reach i.e. 300km, and does not require multiple repeater stations to be constructed and built in order to provide a decent signal.

I must say, I was impressed with the team that led the R&D and travelled to Hong Kong to compete. When we first met them, their presentation only contained technology-speak and scientific findings, but after discussions to ‘dumb it down’ so that the impact of the technology could be understood by your mother-in-law, they really came through. The story that they told was compelling because they demonstrated that vast populations, not just in Malaysia but all over the world, were still underserved and could not benefit from the Internet and the benefits that it brought.

They presented a satellite image of the world where the vast majority of geographical areas were ‘dark,’ representing underserved or unserved areas and that with their technology, Telekom Malaysia (and other telcos which may want to license the technology) were now able to provide services to remote areas without being burdened by cost and worrying about ROIs (return on investments) from taking on ‘national agenda’ type of projects to provide services to bridge the digital divide.

Other awards and categories

DHL Info Services (Asia Pac) Sdn Bhd emerged a merit winner for the Retail and Supply Chain Management Category. This team is like Telekom R&D, the ‘go-to’ technical team for DHL, based in Malaysia, and it develops solutions to help DHL deliver its services more efficiently. We started Part I of this article with Fusionex and it is therefore fitting that we end with the company too.


Fusionex was the winner in the above category, and rightly so for both its technology and also its business achievements. I don’t have to say much about its business or the technology as you can read about it here, but I did want to say something about the entrepreneur behind it all, Ivan Teh (pic).

Having read the article and seen the photo, I have to say, Ivan in real life could pass you in a crowded airport and you wouldn’t know that an extremely successful and dedicated entrepreneur just walked by.

He was on the same AirAsia flight that I was on, and I bumped into him by chance when he offered me a seat on the bus to the terminal. He looked strangely familiar but I couldn’t place him, and we got to talking and then when he introduced himself as Ivan (no mention of surname or company name, mind you), I realised it was Ivan Teh in the flesh.

As I offered my best wishes and arranged to meet him later on to go through his slides and offer some advice on his pitch, he quietly said that he was honoured to be representing Malaysia and the Fusionex team, and hoped that he would do us all proud.

I was left in awe of his modesty and humility but more than that, the sincerity of his words. Many less successful companies selected to represent Malaysia have in past years have attended but not sent their ‘A team,’ presumably because they were too busy or perhaps because of the perceived lack of glamour of the competition (read: no coverage or leverage from winning in the international arena).

I had been expecting that yet again, someone other than the founder would turn up. However, not only did he himself come to represent his team, his business and his country, but he was proud to do so. You rock, Ivan!

And so in response to the question asked by Digital News Asia (DNA) and its founder Karamjit Singh – yes, I know of many like Ivan Teh walking amongst us.

However, the bigger question would be, would we recognise them if we saw them? And if not, what are we going to do about it?

Perhaps 2014 is the year we do away with the Malaysian culture of being sceptical about local technology. Let’s not wait for endorsements by foreign or international customers before we open our doors to local technology because clearly, we have world-class products and entrepreneurs in our midst.

Previous Instalment:  Working behind the scenes whilst their customers shine

This article was originally published on http://www.foundersasia.com/, a platform for tech entrepreneurs, and is reprinted here with its kind permission. Proficeo coaches high-potential tech companies to scale and expand into regional or global players. The writer, Renuka Sena, is CEO and cofounder of Proficeo and FoundersAsia.com.