MONTHS before Uber formally entered the Malaysian market, the company was already getting emails from limousine and car rental companies asking when they planned to launch -- at least, according to Allen Penn (pic), its head of Asia.

In an interview with Digital News Asia (DNA), Penn said that the company was excited to add Kuala Lumpur to its portfolio, to bring “a unique value proposition” to the city’s list of transport options.

“That anticipation is one of the reasons we’re excited to be in Kuala Lumpur, we believe we’ve got something really interesting to bring to the market,” he added.

Uber, a San Francisco-based startup founded in 2010, offers a mobile application that connects passengers with drivers of vehicles for hire and ride-sharing services.

The idea initially came about because founder and chief executive officer Travis Kalanick wanted to find a better way of getting around his home city of San Francisco.

Uber has raised a total of US$300 million from four rounds of financing, and counts amongst its investors Jeff Bezos, Google Ventures, Goldman Sachs, TPG Capital and Benchmark Capital.

The funds raised have been channelled mostly toward its global expansion, and in Asia the company has been expanding its presence over the past two years.

It is currently active in 14 cities in the region, including Melbourne, New Delhi, Tokyo, Taipei and Guangzhou, with over 500 employees worldwide.

Within South-East Asia, Uber officially launched in Singapore in Feb 2013, before having a soft launch in Kuala Lumpur in October, 2013 with local celebrities Alex Yoong and Felina Cheah as its first customers.

The service currently offered in Malaysia is Uber Black, which is the company’s main premium offering. There are plans to offer UberX, its lower cost “ride-share” service, at a later stage.

Penn said that the data gathered from the usage patterns of its users, in terms of where people are using or checking the app, helps form the company’s expansion roadmap for the region.

“We've benefitted a lot from our presence in Singapore, in terms of our how we approached our launch here.

“There’s a lot of movement and overlap between the two markets and a lot of people who have used Uber in Singapore want it in Kuala Lumpur as well,” he added. 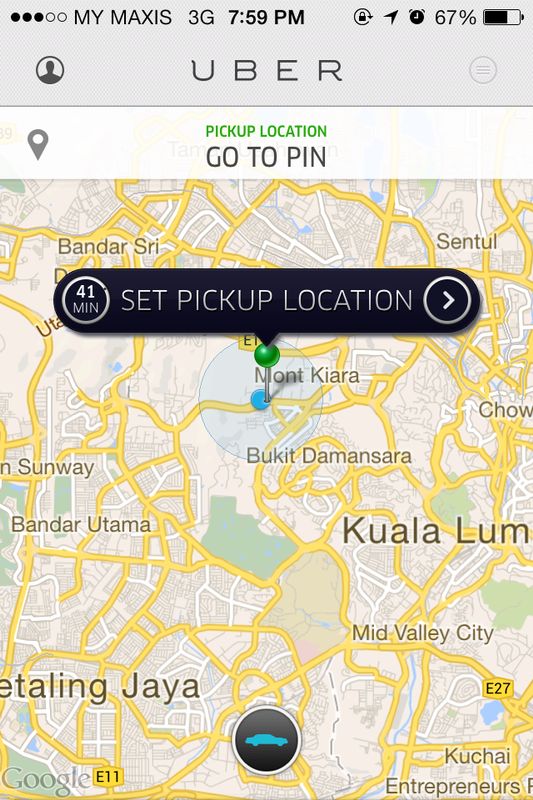 Penn stressed that Uber is a 'local startup' in every market it launches in, with local talent hired to run the business, supported by its international team.

“We’ve got three people from Malaysia running the business for us and that’s part of the customisation process we do for every market, which is finding the right people for the team.

“There are technology nuances to every city, in terms of connectivity, operations and how to deploy across a broad market such as Malaysia. Uber focusing on servicing particular areas initially has been key here and it's a data-driven process, we know where users who are looking are,” he added.

Penn declined to share specific numbers regarding the company’s available fleet of cars or users in Malaysia, only saying that it initially started out with a few cars in October and will scale up as demand grows.

“Our focus is not on the total number of cars; it’s more about making sure that users can get a ride whenever they need one from their location. So a lot of it has to do with managing that by tracking real-time data,” he added.

Penn also stressed that Uber is purely a technology company, providing its solution to its partners, limousine and private car companies.

It serves as a lead-generation source with added functionality. Uber is paid a commission on each trip completed. Penn shared that the pay commission scale varies by market and product type, but is typically around the 20% range.

The on-demand service is intended to offer additional earning opportunities during downtimes for private car companies, or enable them to maximise the revenue earned within the same amount of time worked.

When asked about ensuring that service standards match expectations, Penn said that before bringing a partner on board, the company is fully vetted to ensure it is a legitimate enterprise. The professionalism of the provider is also assessed.

“We want to make sure the Uber experience is a great one. Users are paying a premium and have the right to expect good service. Another element of our quality control processes is the ratings system we have for drivers and customers to rate each other.

“From there, we can gather the data and identify which drivers are great, who can improve and in what areas,” he said.

Penn added that in the event improvements can’t be made, the relationship would be terminated. However, he said that to date, there have only been a handful of such cases.

“It doesn’t happen often; the hope is that we do a good job of vetting in the first place. Also, people take pride in their work, so it is only a small minority of cases and the amount of interest we’ve received shows that they are excited over the opportunity to make more money,” he added. Uber operates on an on-demand model. Users who need a ride will access the app to find out if there are any cars nearby and make a booking. Drivers are not allowed to reject ride requests.

Users can then track the progress of the car in reaching the stated pick-up point, with details such as a photo of the driver and vehicle licence number provided in-app.

The entire process is cashless, with payments made via the credit or debit card users register under their account. Penn said that there are plans to expand payment options as the business in Malaysia grows.

“We’re not a taxi app, what we offer are high-quality, reliable and safe rides at a modest price premium. It’s an elevated experience and a seamless one by nature of the way the system works, with integrated payment,” he claimed.

Uber’s service does come with a premium price tag and the company provided some sample fares in its press kit, showing a ride from the city to the Kuala Lumpur International Airport and the Low Cost Carrier Terminal costing a flat rate of RM300.

A ride from the Kuala Lumour City Centre to Jalan Bukit Bintang in the heart of the city is in the RM13-RM15 range, A trip to KL Sentral from KLCC costs between RM26 and RM33, while a trip from Subang Jaya to Publika ranges from RM64 to RM71.

Tiger Fang, a member of Uber’s international expansion team, said that the company does not intend to be an airport shuttle service, though it is an option for users.

“Uber is more about getting around the city you live in. You’ll find that our prices are relatively affordable, especially within the Klang Valley, for the guarantee of a safe, reliable and comfortable ride to arrive at your destination in style,” he added.

When asked about who would be the target user for Uber’s services, Penn said that it would be someone who values their time above other factors.

“People on the go, be they business people, travellers or just [people who] have dinner reservations. Everyone has places they need to go to and Uber helps make sure they get there, taking some hassles out of the experience of getting to a destination.

“I equate it to that ‘ahhh’ moment of relief when you know you need to be somewhere, you hit a button and see the car is on the way and once you get in, it's clean and there’s a bottle of water waiting. That’s really how I think about the target Uber user, someone who wants the convenience of things,” he said.

The other value-add for users, according to Penn, is the fact that it is a transport network that “steps beyond a single city,” a proposition that is especially attractive in a region such as South-East Asia where there is so much movement between markets.

Penn, who moved to the region last year, shared that the most interesting takeaway from his experience of Asia so far lies in the ways in which people communicate.

“Messaging apps are ubiquitous in Asia unlike the United States, and a lot of companies are still learning how to interact with consumers via these apps.

“Uber has done a Christmas promotion with KakaoTalk previously and are experimenting a lot with how we can reach out on these platforms. It’s very unique to Asia now but it’ll be everywhere soon enough,” he said.

Penn said that for 2014, the company will be focused on growing its existing business and ensuring that it continues to provide a great user experience.

“We want to bring more choices in car offerings and faster fulfilment moving forward, similar to what we have in more mature cities we operate in. These are things we will be thinking about and working towards in the coming months,” he added.