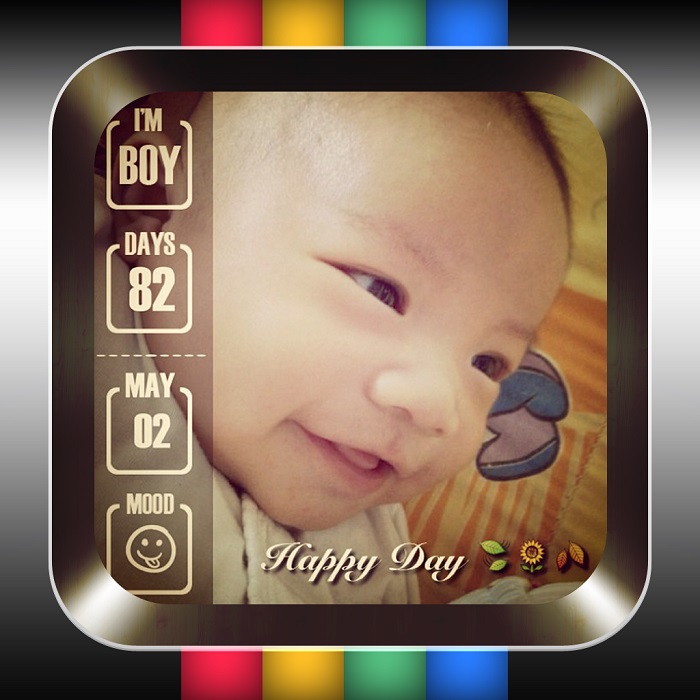 TRUST a first-time father who just happens to be a mobile techie to be the brains behind InstaB, an iPhone app that provides a one-click solution for parents to customise their baby photos or videos.

Tang Tung Ai, technical director and founder of Icon Mobi Solution, notes that there is a perpetual demand for photo personalisation and customisation apps. The idea to launch his own came after he became a father in February.

“As a new parent, I found that I took an extremely lot of photos of my newborn baby. Then I did some research and found that majority of photos that people share on social networks are of babies and food,” he says.

This led to his belief that there is a market for this kind of solution, as parents like to customise and make their baby photos unique, and at the same time, want to be able to keep track of small things like what the baby was doing at that particular time, age and mood.

InstaB allows parents to add such extra information, auto-populating a selected photo with details such as age, gender, zodiac, date and the baby’s mood, and then share it on social networks.

“We are not trying to solve a problem here, but I think that there is a need for parents to organise or personalise these pictures and videos, putting them in order of time with some description,” says Tang.

In terms of competition, he notes that there are other apps in the market which offer similar features for overlaying photos with additional information, such as InstaPlace and InstaWeather.

“However none of them are in the same space as InstaB,” claims Tang. Tang (pic) boasts of over 12 years of industry experience in the design, development and maintenance of application software, and had prior stints with E-Business Sdn Bhd, Iris Corporation, Amdocs and igMobile.

His involvement in the mobile industry began as far back as 2004, but things only really got serious in 2009 when he was introduced to Android development via Celcom’s League of Extraordinary Developers Challenge; and iOS development via Multimedia Development Corporation’s Integrated Content Development (ICON) programme.

Such exposure prompted a serious commitment to mobile app development and Tang founded his own company, Icon Mobi Solution, in early 2012 with two others.

“We are quite active in the local mobile space and won some mobile app development contests in the past few years, including Celcom Developer League Challenge for Symbian, Android, BlackBerry and 1337 Hackathon.

“Besides that, I am also an authorised Blackberry 10 trainer,” he says.

Icon Mobi Solution helps clients develop custom mobile applications on the iOS, Android and Windows platforms, with InstaB being the first offering under its own banner.

InstaB was developed using native Objective-C and integrated closely with social networking service (SNS) frameworks such as Facebook and Instagram.

“Since we are providing a consumer app, we need to learn consumer behaviour in order to improve the user experience. For this, we are using the Google Analytics application programming interface (API),” says Tang.

He says that by doing so, the team is able to get feedback on useful information such as which skin or filter is most popular, which social network user shares the most, peak periods, and which module customers use or drop out from the most.

“As for our server, we are using Linode VPS where we have all the freedom to set up and tune the best performance out of it. Of course, currently we are also looking into Microsoft Azure server, as we are part of Microsoft’s BizSpark Startup programme,” he says. InstaB was launched on the Apple App Store  in the middle of May, and the app has been downloaded more than 20,000 times, generating over 80,000 pieces of content, Tang claims.

“Most of our users are from Malaysia and Singapore. Our average daily active user [numbers] around 400-500,” he adds.

According to Tang, InstaB also managed to hit first position under the Paid Lifestyle app category during its launch month, and since the release of the latest version in late June, the app started to get some traction in Indonesia.

At time of writing, InstaB holds third position in the Paid Lifestyle category of the Indonesian App Store.

The June release added video capability to the app, allowing users to create a six- second video (in square shape) and apply a skin on top of the video.

“The whole idea of this six-seconds video is to record something when photos can’t tell the whole story – like a baby’s first turn,” says Tang.

However, the first six days of the video update being released only saw 5% of video content being generated. Tang believes that this is normal as many users may not have had time to update their app, adding that the team will be giving it another week or two to monitor the adoption progress of the video feature.

He calls the video feature one of the most important aspects of the company’s product roadmap.

“There are plenty of photo-overlay apps out there currently and the entry barrier is low, but a video overlay app is a totally different thing.

“From the business point of view, with a video feature, there is more room and space for us to monetise the app, especially through video advertisements,” he says.

“However, we are not there yet. Currently, we just want to create more useful features and build up our user base first.

“We believe all these extra features … will keep InstaB one step ahead of all the other Insta apps out,” he adds.

The target market for InstaB is parents with newborns or babies up to two years old. Tang admits that his product addresses a considerably small market compared with mainstream photo app offerings.

“But the conversion rate is high if we do it right, as this is one of the few app categories where users are willing to pay,” he adds.

Next page: Growing the baby