AIRBNB was founded in 2008 by Brian Chesky and Joe Gebbia, right after they graduated from the Rhode Island School of Design.

Living in San Francisco in October 2007, they chanced on an opportunity to rent out air-mattresses (which they had to purchase) in their apartment during a sold-out design conference in the city. The two guys then decided to make this a business, which they called ‘Air Bed & Breakfast,’ which finally evolved into Airbnb.

Microsoft started in 1975, leveraging the technical brilliance of Paul Allen and partner Bill Gates. Apple, founded a year later in 1976, had Steve Wozniak and, of course, Steve Jobs.

All the three companies above were founded by two-person teams. Microsoft and Apple were built on technical expertise, whilst Airbnb was built on the determination of Chesky and Gebbia, who simply decided they wanted to start a business, but had no idea what it would be!

We were recently asked by Multimedia Development Corp (MDeC) if there were MSC Malaysia companies that reflected the ‘Silicon Valley’ model. MDeC is Malaysia’s national ICT custodian that is in charge of the MSC Malaysia or Multimedia Super Corridor project to develop the ICT sector.

What we found was that there were, although it has taken much longer for them to achieve scale. These entrepreneurs established their companies about 15 years ago and now have a regional and perhaps global reach. The first MNC (multinational corporation) to set up in the Free Trade Zone (FTZ) in the northern Malaysian state of Penang was National Semiconductor, followed by Advanced Micro Devices and Intel in 1972.

Known as the ‘Eight Samurai’ (PDF), these companies drove the industrialisation of Penang. It would seem natural therefore that Penang would birth high-tech global companies, and three of the four ‘Silicon Valle model’ companies we found were from there.

Now listed on the main board of Bursa Malaysia, ViTrox was first admitted to the ACE Market in 2005.

Chief executive officer (CEO) and cofounder Chu Jenn Weng graduated from Universiti Sains Malaysia (USM) with a Master’s of Science in Electrical & Electronics Engineering. At USM, for his final year project, he developed an industrial camera application for quality assessment based partly on his interest in photography.

When he joined HP as an instrument engineer, he was tasked with setting up and running a four-man machine vision team.

Cameras were able to replace human visual inspections. They were more efficient, accurate, reliable, orders of magnitude faster, and could be deployed early in the manufacturing cycle. Identifying defective parts early not only reduces waste and improves productivity, but also results in production cost savings.

We asked Chu about his interest in photography and he said, “After my internship at HP, I convinced my lecturers to allow me to do a project on machine vision. I continued to develop these skills and at HP, I spent five years designing machine vision inspection machines.”

Part of his team at HP was computer science engineer Steven Siaw Kok Tong, and in 1999, the two left to start ViTrox, which initially had a development contract for a machine vision system. Yeoh Shih Hong, another USM intern at HP, graduated and joined ViTrox that same year as their first employee.

The trio form the core management team and own 61% of ViTrox – a major incentive to ensure the company performs well.

ViTrox now competes on the global stage with companies from Europe, Singapore, Taiwan, and the United States.

As a high-growth technology company, its challenge is the recruitment of the best engineers. ViTrox has a headcount of 350-plus, of whom more than 200 are engineers. To get the right people, it has set up a hiring procedure which includes tests for competence, capability and, more importantly, for the right attitude.

Recruitment is a critical function often overlooked in organisations. Once primary selection is done at ViTrox by its HR (human resource) department, hiring managers test for skills and competence – but Chu himself does the final interview.

He says, “Development is a team effort, so we need to make sure we get talented engineers, but they must have the right attitude – able to architect solutions and willing to play as a team.”

One challenge for technology companies is how much money they should set aside for long-term R&D projects. ViTrox, for example, sets aside about 15% of revenue for the development of new products – that’s substantial.

Unlike ViTrox though, 30% of its expenditure was for the design of PCBs (printed circuit boards), schematics, circuit diagrams and engineering samples, while the remaining 70% was spent on prototyping, tests, safety certifications and sample production.

“That’s an expensive exercise, but we are proud to have 38 strong patents,” he added.

MDT’s revenue has grown steadily since inception. In 2015, it doubled its 2013 revenue of RM51 million by providing ‘track and trace’ services for crowd movements and assets. It also developed specialised RFID chipsets for use in hostile conditions – high temperatures, washable, etc.

Liew (pic below), a Maktab Tentera Diraja (RMC) graduate, was sent to the United States on scholarship to study computer science and stayed on to work for Fuji-Keizai, a Japanese technology consulting firm. Liew said that on visits home, he visited Cyberjaya and was “invited by MDeC to come back to Malaysia to set up a company.”

Initially MDT, founded in 2000, developed and supplied boards for display panel manufacturers in Taiwan, China, Japan, and South Korea. In 2003, it decided to focus on RFID systems, an expensive proposition.

Since designs have to be translated into production at great cost, Sim has worked to build an experienced team.

“This is an industry where design for production is a critical skill. It’s hugely expensive to commission a piece of silicon, and so we need to be ultra-careful in the design process,” he added.

Aemulus was listed on the ACE Market of Bursa Malaysia in October 2014. Cofounders Ng Sang Beng and Yeoh Chee Keong were colleagues at Altera Corporation in Penang. Ng was a test engineer, while Yeoh, eight years older, was a senior manufacturing engineer.

Realising that test equipment for camera modules in phones were too sophisticated for the simple low feature-cost products, they decided to produce low-cost, fit-for-purpose testers.

The duo formed their company in 2004 after “researching the products and building a new design architecture from scratch” said Ng.

They were joined in 2005 by Wong Shee Kian, also an engineer at Altera, who later stepped into the role of chief technology officer.

The technology talent available in Penang has made recruitment of engineers much easier, although local companies do need to compete for talent with the multinationals.

Over the years, Aemulus has moved up the value chain to produce chipset-based RF (radio frequency) testers at a lower cost and with a much shorter test cycle.

Initially, it was a struggle to get customer acceptance, even from Penang-based prospects. “Our testers were being used in production facilities in Penang, but the decision to purchase was typically made in the United States,” said Ng (pic above).

“It’s easier now as we are better known, and much of the decision making for tester products has moved to Asia where the production centres are located,” he added.

The larger companies have decentralised decision-making, and that has opened up opportunities for companies in this region.

Perhaps there is no longer a need for Malaysian companies to set up in the United States? 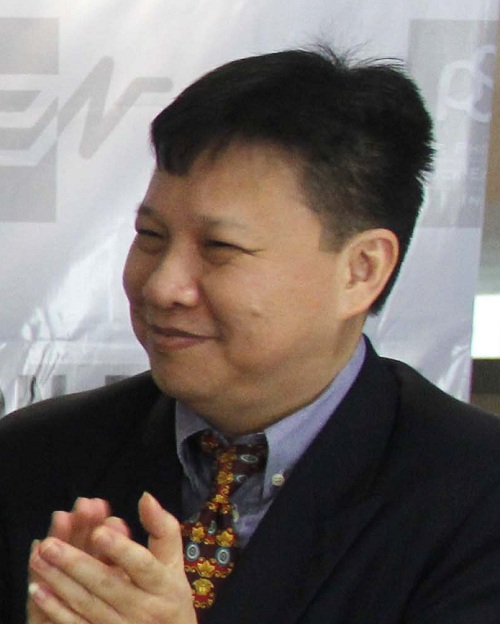 Can you form a team first, then look for the right business frame?

Well, in the case of N2N Connect Bhd, that is exactly what founder Andrew Tiang (pic) did. His career took him from being an IT executive in a local audit firm to stints in audit and product development with several large companies – Deloitte, Citibank, Computer Associates, and finally i2 Technologies, where he ran the Asia Developer Centre.

Having held different roles and having built a large network, he was keen to start a business that, as he put it, “did not compete with my previous companies, was not a body shop, not a dotcom, and offered a recurring revenue stream.”

With a tight enough definition of what he wanted to do, and having put aside enough money to spend a year looking for the right opportunity, Tiang and his four cofounders looked around.

They finally settled on building an online trading platform. In 2001, working with JF Apex, a stockbroking firm, they bootstrapped the development of the product. The platform extended the reach of a stockbroking firm well beyond the existing broker network, and so they pitched to CIMB.

The initiative was called [email protected] and allowed CIMB to develop the largest retail broking network in Malaysia. On the back of this partnership, and three more brokerage customers, N2N went public in 2005 on Bursa's Mesdaq, now renamed the ACE Market.

N2N’s trading platform has been extended to handle derivatives, palm-oil commodity futures, forex trading, as well as other asset classes.

N2N recently attracted the interest of Nikkei Inc and its subsidiary Quick Corp, a major Japanese information terminal provider, both of which acquired a major stake in the Malaysian company in 2014.

N2N intends to expand into the pan-Asian region and has been investing to build and secure approval from the exchange regulators in each country.

The fragmented state of regulations and practices across countries is a major problem as one needs to chase down approvals … one country at a time.

“The exchange needs to 100% sure of the integrity of our system,” said Tiang. “We have approvals from all the major exchanges in the region including Asean exchanges, Hong Kong, Australia, Saudi Arabia, Kuwait and the Chicago Mercantile Exchange.”

The process of getting approvals requires perseverance and deep pockets, a reminder that the Asean market of 10 countries and its 620-million population is a tough one to crack.

Locally-based companies should have an advantage over the large MNCs, which typically roll out a single global solution with limited customisation.

As Tiang proudly pointed out, “The Philippine Stock Exchange selected N2N over other international contenders to provide its trading platform to all its 120 brokers.”

We look forward to reading more on the success of N2N in its rollout of the trading platform and terminals in the region, with the next stop being Australia.

It is great to know that Malaysia has a clutch of technology companies that have expanded into the region, helmed by entrepreneurs who have accumulated considerable wealth, which they are using to seed new ventures.

Perhaps ViTrox, Aemulus, MDT and N2N will be the ‘four samurai’ that will establish Malaysia as a launch platform for companies seeking an Asean expansion strategy.

The ‘entrepreneurisms’ necessary for success

Digerati50: Infusing his people with belief