Now to the main highlight of the story, the camera. So much emphasis has been placed on the Selfie Pro’s ability to help users snap that perfect shot.

Equipped with dual front facing cameras that provide different functions, the main camera sports a 24-Megapixel shooter with an 83-degree field of view complemented by a lower resolution 5-Megapixel wide-angle camera that provides a 120-degree view.

When it comes to taking selfies, the quality of the images is sharp and detailed in well-lit settings. It also boasts a wider f1/1.8 aperture compared to the rear’s f/2.2, making it better able to pick up light in dim conditions.

Truth be told the Selfie Pro often leans towards overexposing pictures fairly often regardless of whether you are shooting during the day or night.

Asus has also upped the Selfie Pro’s front camera’s video capability giving it the capacity to record up to 4K resolution videos. It is not a feature we would expect everyone to use often, as checking out your pores and pimples in 4K isn’t a great way to pass time, but it is a nice option to have nonetheless. Basically, it all boils down to the main camera being used to capture nice portraits with ‘bokeh’ effect and low light selfies. If you have a big group of friends the wide-angle camera comes into play so you can get everyone in the shot without the risk of cropping them out from the picture.

On the opposite side, Asus has thrown in a 16-Megapixel camera that takes decent enough photos but isn’t quite as good as the front camera. Asus certainly has improved the camera interface a fair bit, giving you additional options like a Pro mode and even the ability to capture images in RAW format for post-processing.

However, the end results just weren’t that pleasing as the camera often underexposed images more than it should have, even during the day. Shooting a scene with a bright sky, for example, results is a picture that is too dark and needs to be enhanced to bring out the details.

Granted the built-in photo editor is impressively well featured, but it is a hassle to adjust each and every photo. Also, colour accuracy is a little off compared to reality so you need to adjust that too.

Now, if you were thinking of switching to the better front camera as your primary camera, you are out of luck. Not only is it impossible, and impractical, to frame the shot but the camera is just not cut out for taking fast-moving subjects, often leaving you with blurry photos.

Video quality for the rear camera, for the most part, is pleasing and the inclusion of EIS (Electronic Image Stabilisation) helps keep your footage steady even if your hands aren’t. You also get to record up to 4K quality for the rear so you are pretty much set to make 4K home content with the Selfie Pro.

With that here are a few sample shots taken with the Selfie Pro. In doors, the shots tend to be a little under exposed. The highlights in the outdoor shot are blown out but it manages to maintain the details of the main with the umbrella. This night shot was taken with Pro mode and a little underexposed to train to maintain detail without higher ISO which introduces more nosie. Finally, here is a selfie shot using the front camera as it exposes for the face and brightens the background. 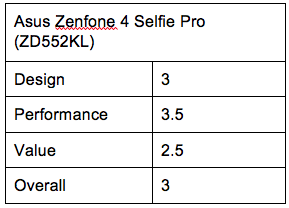 So, is the Zenfone 4 Selfie Pro worth your time and money? No doubt, the Selfie Pro offers a lot of tools and the ability to capture that perfect selfie be it solo or in a group of friends. The dual camera setup is suited for those who want to get great shots even when the lighting is not at its best. The addition of 4K selfie video capture is certainly interesting and likely a defining feature for the Selfie Pro.

That is not to say that it is perfect as images tend to be slightly blown out and the rear camera isn’t as strong as we would like it to be with pictures usually underexposed and a bit off on colour accuracy. We just hope that Asus takes this feedback to find a fine balance between the two cameras facing opposite directions.

For US$428 (RM1,795), the Selfie Pro’s specs are rather underwhelming for a phone at this price range. Sure, the Snapdragon 625 series is made for power efficiency and it performs as advertised but it isn’t the strongest chipset if you are a power user.

Apart from that the storage and battery capacity prove to be no issue with this phone, so it just comes down to a matter of what you value most in a phone. Suffice to say among the competition, the Selfie Pro has good optics for those who can’t enough of themselves.

Huawei’s Nova 2 Plus is its new mid-range hero