CHINESE device maker Xiaomi recently introduced its new affordable smartphone Mi A1. Originally sold as the Mi 5X in China, this new version is part of Google’s Android One initiative that aims to see stock Android on more devices.

First up it measures just 7.3mm thin with a full metal body that is also fingerprint resistant. It has a rear fingerprint sensor for added biometric security. Other added features include an IR blaster on top for controlling various home appliances as well as a 3.5mm headphone jack.

The Mi A1 uses USB type-C for charging with a 3,080mAh battery to support it.

On the front, it has a 2.5D Corning Gorilla curved glass display that measures 5.5-inch in size. The resolution is still full HD though that is good enough for reading, gaming and watching videos.

Underneath the hood, the Mi A1 comes powered by a Qualcomm Snapdragon 625 processor, 4GB of RAM and 64GB of internal storage.

Xiaomi says that the Mi A1 comes with a 10V smart power amplifier that paired with its Dirac HD Sound algorithm is claimed to provide a more powerful output and deeper lows for both music and calls. 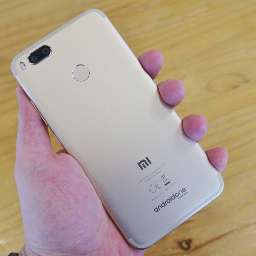 The M1 A1 comes with dual cameras on the back that offer versatile shooting. Comprised of two 12-Megapixel cameras: one wide angle lens and the other a telephoto (with up to 2X optical zoom) capturing capabilities, the lenses work together to simulate bokeh (blurred background effect).

Xiaomi says there is a seamless integration between the Mi camera app and Google Photos that offers unlimited storage to store in the cloud and sync your photos across devices.

Of course, being an Android One device the Mi A1 will run on Android 7.1. in place of Xiaomi’s usual MIUI interface.

That being said you can come to expect what is in store Android with a much cleaner interface and offers more space to install your favourite apps.

It comes in three colour variants of black, gold and rose gold.

The Xiaomi Mi A1 will be available at Xiaomi's authorised retailers and online on its official store Lazada at a retail price of US$262 (RM1,099).