THE Infocomm Development Authority of Singapore (IDA) and the Land Transport Authority (LTA) have launched Beeline, a mobile app that they said allows commuters to pre-book rides on express private bus routes.

LTA and IDA have partnered private bus companies such as Bus-Plus to operate the initial set of buses routes listed on the app, they said in a joint statement.

Beeline is an experiment to explore how transport networks can be made more adaptive to changing commuter demand.

The experimental private bus routes are computer-generated by analysing historical travel patterns and crowdsourced suggestions on the Beeline website. Since going live in April 2015, Beeline’s website has crowdsourced about 3,400 suggested routes.

This helps bus operators identify routes with viable commuter demand for faster and more direct bus rides, and offer bus services along these routes, the IDA and LTA said. The Beeline app completes the cycle by allowing commuters to book seats on these services. 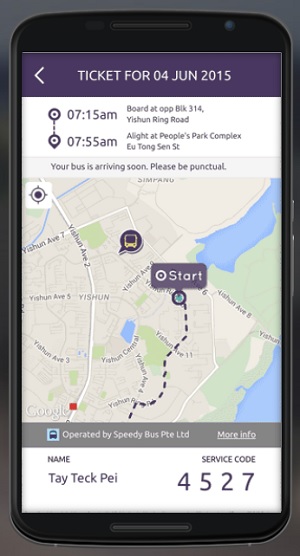 At least 10 more routes are expected in the coming months.

Other operators who are listing buses on Beeline include Aedge Holdings and Commute Solutions Group (sharetransport.sg).

IDA and LTA said they welcome participation from other private bus operators interested in listing routes on the Beeline app.

The Beeline experiment is expected to run until the first quarter of next year, after which IDA and LTA will assess commuter response and if the concept can be applied more widely.

The Beeline app is available for free on the Google Play Store and the Apple App Store under the title ‘Beeline SG.’ Commuters can learn more at www.beeline.sg.