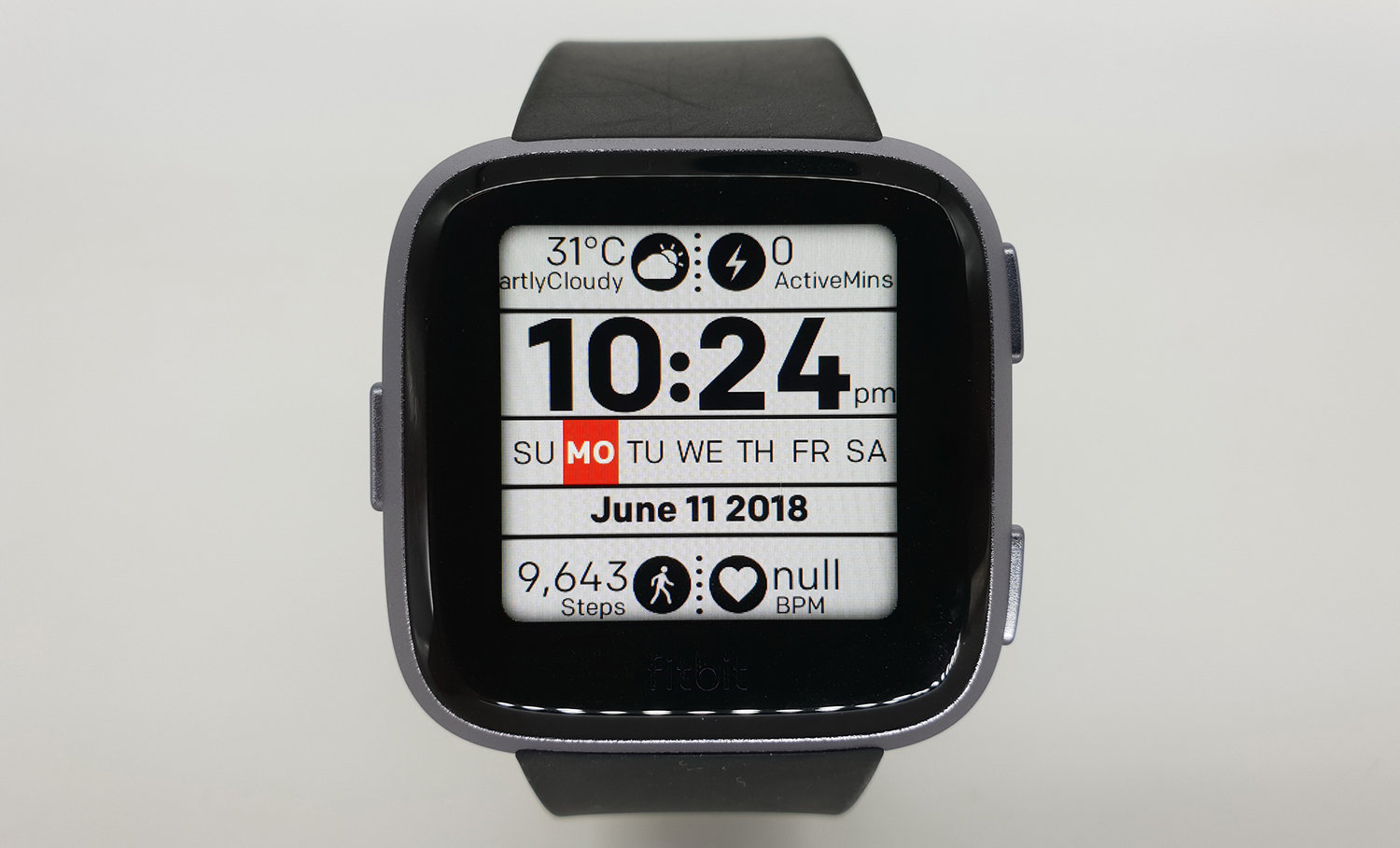 THE devices that we wear on our wrists are becoming just as ubiquitous as the smartphones in our pockets. While there have been whispers of wearables eventually dying out, that doesn’t seem to be the case.

Companies like Fitbit are still in the game, introducing new models and their latest Versa smartwatch wants to appeal to a broader audience of fitness-conscious users who may not necessarily be fitness buffs.

The Versa also nicely fills in as a more affordable version of Fitbit’s flagship smartwatch the Ionic, released in end 2017. So, does this smartwatch deserve your attention and is it worth the money? I take it for a spin and find out. From the get-go, the Versa sports a lighter square design that makes it appear more a designer watch rather than a dedicated fitness tracker. The anodised aluminium case looks smooth, modern and pleasing, taking a page from watches like the Apple Watch.

At a glance, the Versa could pass off as a more modern take on the Pebble watch given its passing resemblance to the Pebble Time Steel.

Incidentally, Fitbit bought Pebble in early 2017, so it was only a matter of time before it took advantage of Pebble’s intellectual property and engineers to enhance their own smartwatches.

Physically, the Versa has a wake-up button on the left and two other buttons on the right that can be used as shortcuts to your favourite functions or for pausing or finishing your workout.

The Corning Gorilla Glass screen seems quite durable given the fact that I took the Versa everywhere I went. The 1,000 nits bright screen meanwhile offers vibrant colours and is very bright, so much so that you can use it in direct sunlight and even see it underwater when swimming.

In use, the touch commands were very responsive and accepted input without any delays whatsoever.

So, whether you have big or tiny wrists, the Versa easily fits. Also, with a range of swappable straps, you can easily match the Versa with your outfit for the day.

My Fitbit Versa was the Special Edition so it came with an extra fabric strap as well as the standard silicon strap. The ability to choose between the two was handy as the fabric strap was used for formal occasions while the silicon strap served well during workouts. 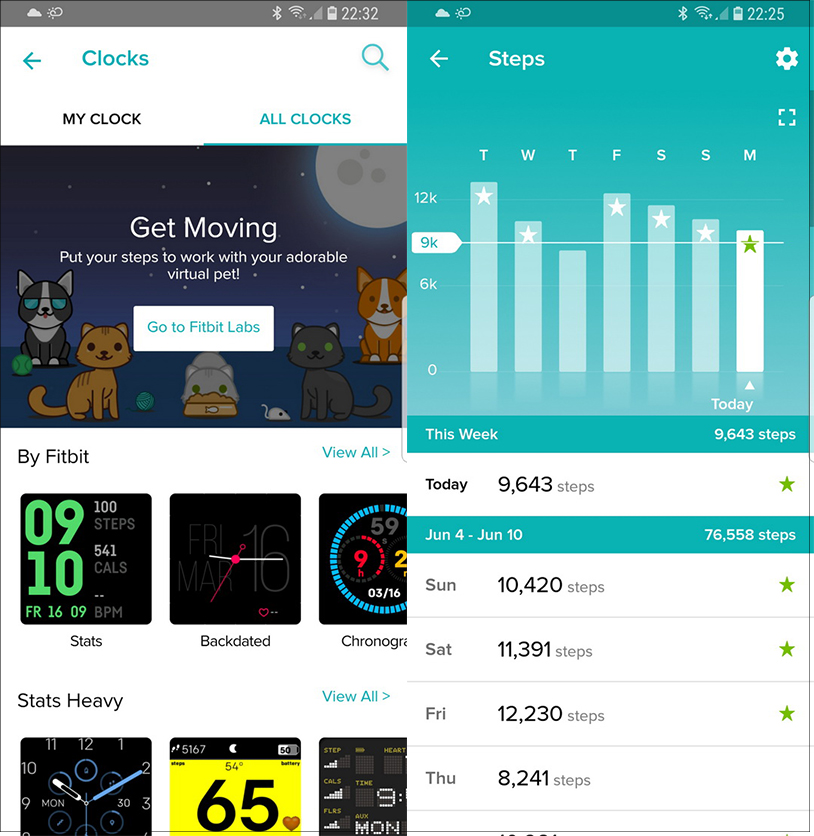 I tested the Versa paired with a Samsung Galaxy S9 throughout the review. It was very much a big part of my daily routine as I used it to check WhatsApp, emails and calls from the phone.

The Versa is designed to be worn for at least a full day, so it is good to note that it never felt uncomfortable throughout my time with it. Its compact design feels less bulky and the wide square screen is easily viewable in most conditions.

Fitbit took some lessons from the Ionic and have packed the Versa to the brim with features.

Of course, functioning as a fitness tracker, it can keep track of a variety of workouts from running, cycling, swimming or interval workouts.

During workouts, the watch will display information like your heart rate, time spent and the number of calories burnt.

The information differs depending on the exercise you perform. Running, for example, brings up your average pace and it also alerts you for every kilometre you run. Even when you are in the pool it can accurately track the laps you swim.

Ending the workout gives you a summary so you can see how well you did. All of this is viewable in the app and syncs with the Fitbit app on your phone.

Apart from tracking your workouts, the Versa also keeps track of your sleep pattern to offer you better insight on how much quality sleep you are getting. The feature functions pretty much the same as when it was introduced in the Alta HR.

For ladies, Fitbit has added a new Female Health Tracking feature that helps track their menstrual cycle. Users would be able to receive push notification two days before the predicted day of their next period.

A bevvy of features to explore

The Versa ships with Fitbit's latest OS 2.0 with a new dashboard that provides what Fitbit calls Stats at a glance. Here you can see your daily and weekly health and fitness stats.

I liked how there is now a dashboard that you can bring up to see how your weekly progress has been and whether you are meeting your goals be it your steps, calories burned, the number of times you exercised, active minutes or sleep.

You get 4GB of internal storage to store content like music and apps locally. However, only 2.5GB is actually available to store music. Though limited in the number of songs you can store, the ability to store music on the watch itself frees you from having to bring your smartphone with you on a run.

Besides that, you also have the option to stream music over Deezer natively via a built-in app. Yes, admittedly it is not Spotify but it will do and you can still always listen with a paired smartphone anyway.

Just like any other smartwatch, there is the option to customise and change your watch face. The variety of watch faces is decent but not quite as varied or high quality as what you may find on say the Android Wear app store.

While there are some cool favourite watch faces that I picked out, I didn't like that only one watch face can be stored on the Versa at any given time. This means that any time you want to change it you need to go back to the Fitbit app to make the change.

Even worse is the fact that you can't 'favourite' your faves and need to search for it manually. This is honestly poor planning on Fitbit's part as it defeats the idea of customising your watch.

The App Gallery that houses additional apps to load on the Versa isn't that great either. The selection of apps is akin to the early days of the iOS App Store, meaning to say there are plenty of duds like 'Flashlight' apps, 'Rulers' and other generic apps.

The only apps that are mildly interesting or useful are those from Fitbit themselves or news apps like the New York Times (which is not very relevant here in Southeast Asia) and Flipboard.

There is no built-in GPS for runners to track the path of their run, but you can still link the Versa with your phone for GPS.

One last new feature Fitbit has included on the Versa is Fitbit Pay, a sort of virtual wallet to carry your Amex, Mastercard or Visa credit card at all times. I can see the appeal and potential, as it frees you from having to carry a wallet as you run.

But at the same time, this remains to be seen as it is not activated as it is not available in Malaysia just yet. Fitbit maintains it is in the process of working with local banks to roll the feature out. However, if and when that happens is anyone’s guess.

The feature does, however, work in Singapore for OCBC Bank and United Overseas Bank account holders. When it comes to battery performance, the Versa certainly can last you a few days without charging. It takes the stress out of reminding yourself to charge it every night before you go to bed, unlike most other full feature smartwatches.

Fitbit claims that the Versa can last up to four days on a single charge though, in reality, it is closer to three and a half on average based on my experience. Also take note that this figure is dependent on the number of workouts it needs to track, whether you have been using it to listen to music and the level of brightness set for the screen.

One downside is that the included proprietary clip and dock charging cradle for the watch is a little bulky and cumbersome to store. It may be a little of a hassle when packing for a trip but on the bright side, it is big enough to notice so it is less likely to be misplaced compared to a charging cable.

It is a good looking and comfortable to wear and water resistant so it is ready for any situation.

There are some notable improvements on the interface side and being able to have information ready to read on your wrist is a refreshing change from having to bring up the app to get an idea how well you are doing.

However, the watch face selections are quite a mixed bag and you can’t change it easily. The selection of apps is also bad and it definitely needs better quality and variety. Contactless payments via Fitbit Pay would be great but it is a feature that is missing on the more expensive special edition (US$287 or RM1,120), as such it is best to go with the regular edition (US$253 or RM990) if you are on a budget.

In conclusion, the Versa is a step in the right direction for Fitbit. It is a competent health tracker and provides a good amount of data and feedback for daily health monitoring. But to make it truly great Fitbit needs to tighten up on its operating interface and features.