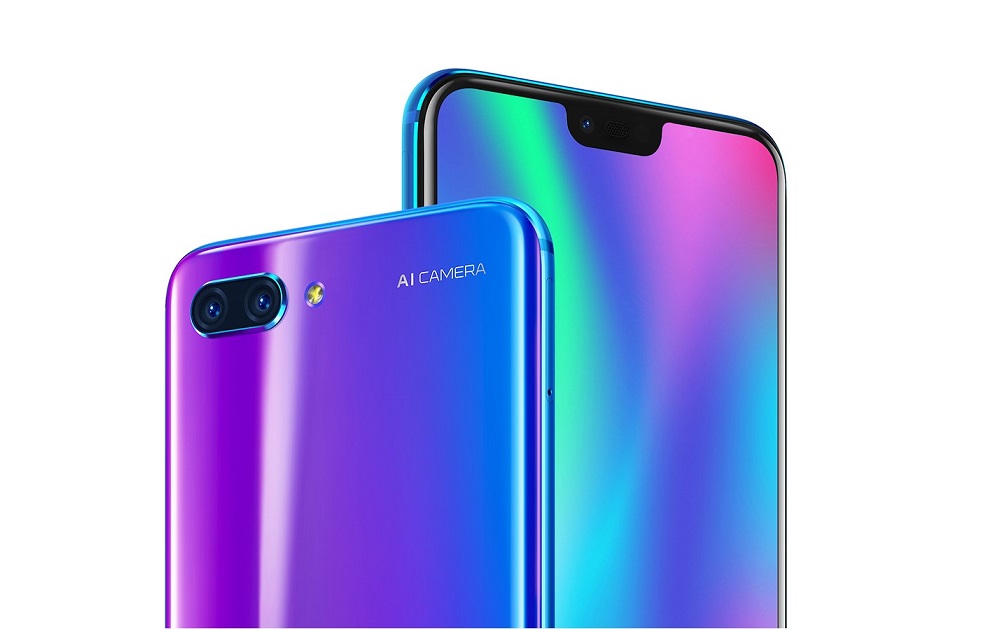 SO THE Honor 10 is finally out. There has been a lot of talk about this smartphone simply because this latest beauty from parent company Huawei Technologies Co Ltd has been touted as a budget version of the recently launched, and much talked-about Huawei P20.

For the uninitiated, the Honor brand is an offshoot of Huawei’s main line of smartphones, which comprise the Huawei Nova, Mate and P series. Historically speaking, the Honor brand was purportedly introduced in 2013 to challenge competitors – notably Xiaomi Inc’s range of phones – in the mid-range section of the market, according to consumer tech portal Engadget.

Beginning 2013, Huawei introduced the Honor 3X, and since then it has been moving up in model number culminating in the Honor 10. The Honor 10 will be officially launched on May 22 and Digital News Asia will bring you the exact pricing of the device as soon as we know it.

By all accounts, the Honor brand has been well accepted in the mid-market section and has been doing quite well, especially in China, where it was a top brand, according to Counterpoint Research.

“For Huawei, the bulk of the growth was driven by its sub-brand Honor which contributed to more than 60% of its shipments during 2017,” said James Yan, its research director. The Honor 10 has been the talk of the town because of its striking looks and resemblance to the Huawei P20. The first thing that struck me about the smartphone is the two-tone colour scheme. Huawei claims this scheme is designed with a 15-layer glass rear that is created to reflect a two-tone blue and purple colour, depending on which angle your eye meets the device.

The unit I reviewed is called Phantom Blue, and there are three other colours available – Phantom Purple, Midnight Black and Seagull Gray – when it was launched in its home market in China.

Though a novel idea, I just feel it’s a little ‘too loud’ for my taste as I would very much prefer a matte black or plain coloured back to this two-tone scheme, but that’s just a personal preference. Many consumers have talked about how unique the two-tone coloured back is and have praise for it – not from me though.

Also, being a glass-based smartphone, the Honor 10 is definitely a smudge and fingerprint magnet, something that can be partially mitigated via the transparent case the smartphone comes with.

As for the front, the issue centres on the much-talked about ‘notch’ at the top of the smartphone, ala Apple’s iPhone X. Ostensibly, it’s a very polarising issue, so I won’t wade anymore into this discussion as to whether it’s good or not; if you’re really interested, just head here. 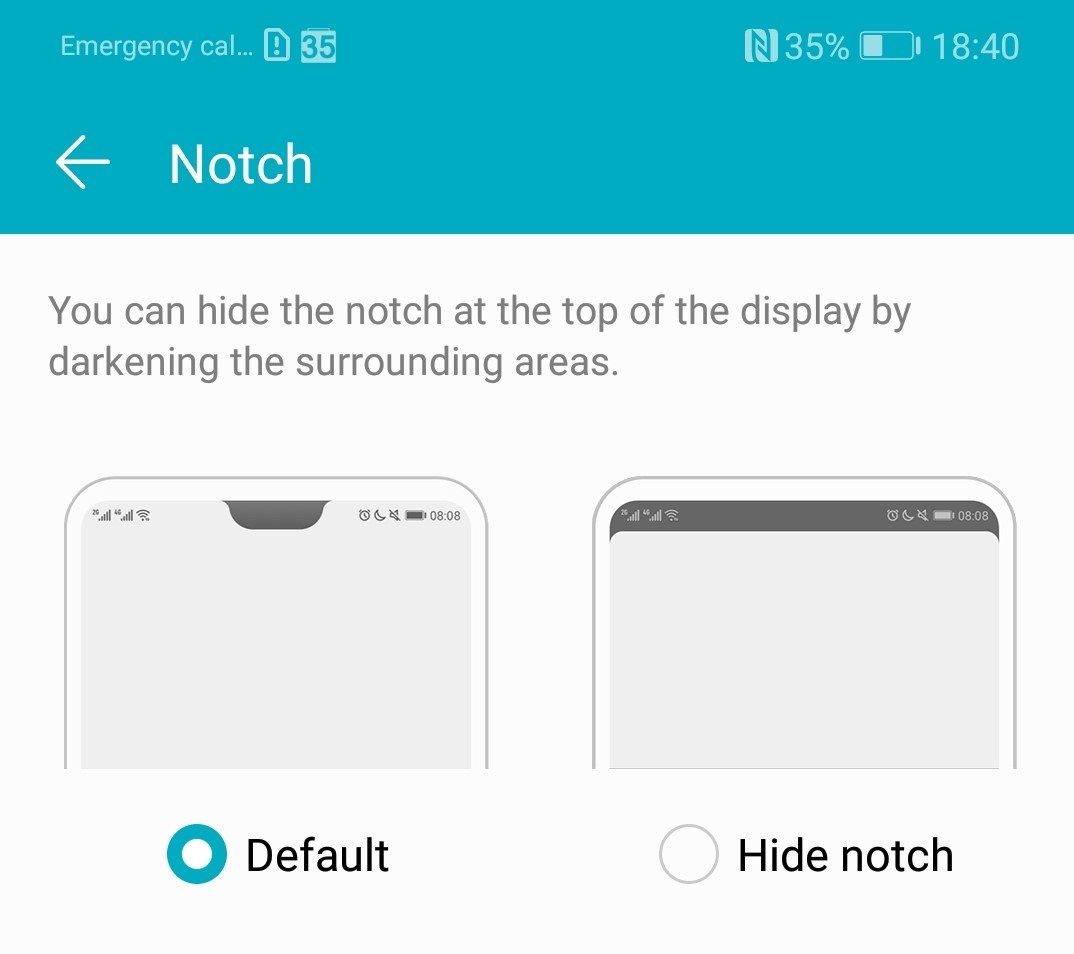 Personally, I didn’t mind the notch so much; to me the notch on the Honor 10 isn’t too bad and for me, it’s just about getting used to the look. But if the notch really bothers you, you could ‘turn off the notch’ on screen via your display settings. After doing so, you’ll just get a flat cut off black tone strap where the earpiece of the device is. 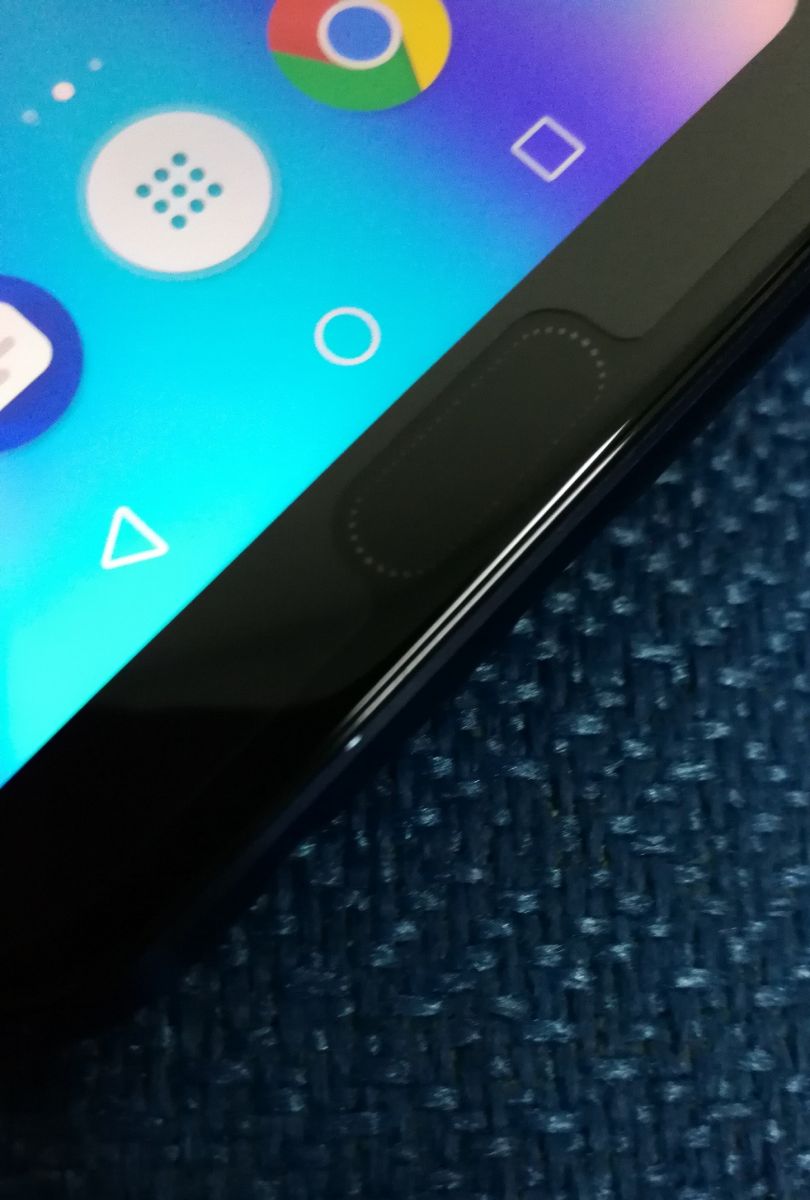 Another notable first for the Honor 10 is an under-the-glass fingerprint scanner, which Apple tried to implement with its iPhone X – something that eventually didn’t happen. Design-wise, it’s pretty slick because there isn’t a bump on the screen as the sensor is flush with the screen.

However, I felt that the scanner was a hit-and-miss at best as it didn’t perform as well as normal scanners. In my tests, it takes a tad longer to recognise my fingerprint when compared to the metal-based ordinary fingerprint scanner; and sometimes it takes two or three tries before it recognises it at all. This can be quite frustrating to use given that I’m so used to my Mate 9’s lightning-quick recognition.

The specifications of the Honor 10 are pretty solid. The smartphone comes equipped with an octa-core Hisilicon Kirin 970 CPU, a Mali-G72 GPU, either 64GB or 128GB of storage, either 4GB or 6GB of memory. My test device had a 4GB memory and 128GB of storage.

The IPS LCD 5.84-inch screen comes equipped with a 2,280 x 1,080 display resolution, giving it a 19:9 aspect ratio. The dual front camera sports a colour 16 MP (f/1.8) sensor, while the second monochrome is 24MP. It also has phase detection autofocus. The secondary (selfie) camera comes in at 24MP f/2.0. The video supports [email protected] and [email protected]

Software-wise, it comes equipped with Android 8.1 mated to Huawei’s own EMUI 8.1. The battery is rated at 3,400 mAh and charging takes place via Huawei’s super charging Type-C reversible connector. There is a mono speaker at the bottom.

Overall, the Honor 10 is a pretty well-built smartphone that exudes a premium feel. But to be fair, most smartphones from other vendors also have the same quality. First up, the display. For me, the display is pretty nice and though it is an IPS LCD panel, the blacks do look black enough, although it isn’t a match when juxtaposed side-by-side with an AMOLED screen.

Because of its 19:9 aspect ratio, the smartphone is rather easy to hold and is akin to a 5.2-inch feel. But I feel this works against the Honor 10 as the screen is a little ‘squeezed’. By this, I mean that the screen seems too narrow for my liking especially when I’m watching YouTube videos or using my Netflix app.

Videos looked ‘compressed’ and bothered me as the 19:9 aspect ratio seems to work against the phone instead of enhancing it. I would have liked the device to be slightly bigger at say 6.2-inch to take full advantage of the almost bezel-less feel.

Compared to the OnePlus 5T I reviewed in February, I found the smartphone not as narrow because the overall screen size was bigger at 6-inches, the 5T didn’t have this same effect. Perhaps that’s a small thing with most, but with me, it was a biggie. Brightness under sunlight was OK, and for the most part, I did find the display showing fairly natural images.

Screen-on-time was quite good and I got six-plus hours with it, which isn’t bad for a 3,400mAH battery.  Real life test using YouTube and Netflix yielded so-so results; a full Netflix two-hour feature movie sapped about 20% of battery life and although that figure wasn’t bad, it wasn’t as good as the more premium smartphones. Audio for the most part was OK although it only had mono-speakers. In terms of everyday overall performance, I found the Honor 10 with 4GB of memory satisfactory. There was some lag sometimes when swiping between screens and sometimes apps took a tad longer to open.

Performance-wise, the Honor scored reasonably well. On Geekbench 4.2, the scores were 1,877 for single core mode, while multicore mode scored 6,552. As a comparison, the Huawei P20, recently reviewed by DNA scored 1,887 and 6,367 for single and multicore respectively.

From an EMUI user interface (UI) perspective, the experience is pretty much similar to the EMUI 8.0 that I’m used to on my Mate 9. There are however a few new features worth mentioning with the EMUI 8.1.

The most notable is the face unlock feature, first popularised and brought to market by Apple. Huawei has implemented its own version of this feature and for the most part, it works. It’s also noteworthy that my test in dark or very low light conditions yielded good results – the Honor 10 had no problems recognising my face in the dark.

However, when setting up, the software does warn you that your device may be unlocked by someone with a similar looking face. So my advice is to think carefully whether or not you want to turn this feature on, as convenience does come with a price.

For more on EMUI 8.1, you could check out this website.

The Honor 10 is equipped with all the standard features found on most phones today. That includes ‘Portrait’ mode and ‘Aperture’ mode. These to me were all quite good. Low light photography did not rival the best-in-class from the competition and so if you’re looking at this as a main feature, beware.

The selling point of this phone though is the AI camera mode, which is what I’m going to concentrate on in this review. There are also some improvements made on the camera software, which is infusing a form of artificial intelligence (AI) into it, building on what Huawei brought to the market with the Mate 10 late last year. 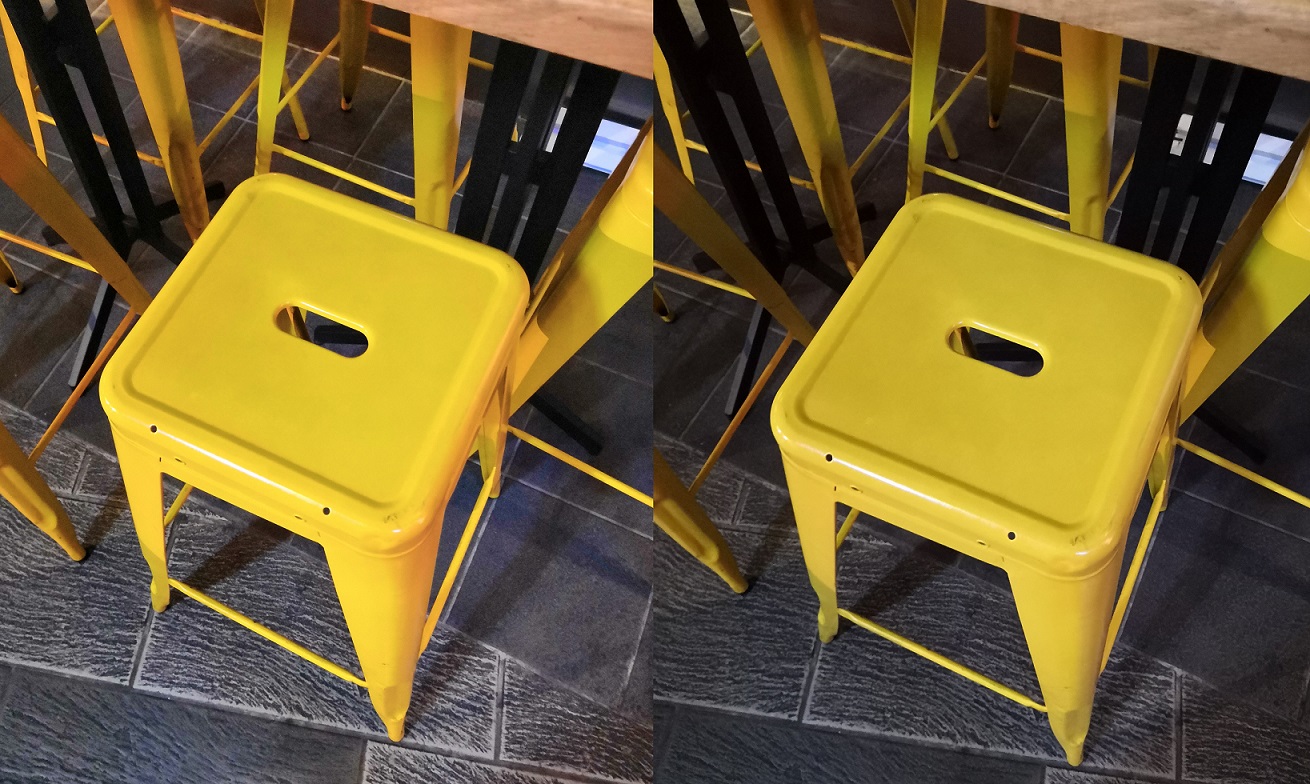 When engaged, the Honor 10's AI mode tends to bump up the saturation and exposure for most pictures. The left image is one taken with AI while the right is shot in normal mode.

The camera performance is IMHO a little perplexing. For everyday shots outside, the camera performs well. The addition of the AI feature is expected to enhance the shots as the software algorithms are supposed to automatically ‘make decisions’ as to how best the camera responds to the scene being shot.

I find the AI software tends to overcompensate and make the shots taken livelier than they actually are. Put simply, the shots with AI can potentially look artificial (no pun intended).

Low-light shots also kind of left me underwhelmed. When AI is applied, again the shots look overcompensated and brighter than they actually are.

The AI mode shot on the left is brighter though it tends to over expose the scene.

This is the thing with smartphone cameras these days. In the heydays, cameras were dependent for the most part on the hardware specifications rather than on software. With features such as AI coming to the fore, the lines are being blurred as to what is actually captured by the camera and what is being processed by the software.

It’s akin to the time when digital photography first came out and you had the likes of Adobe’s Photoshop that were able to ‘clean up’ pictures that people took. Personally, I would rather prefer a good camera setup with minimal interference from software.

So when looking at the Honor for your choice of phone, do bear all these in mind.

As a mid-ranger priced at US$427 (RM1,699), the Honor performs well overall. (Updated to reflect price unveiling)

Apart from that, the camera was competent for the most part but I didn’t quite like the way the AI shots came out.

The fingerprint scanner was also a bit of a let-down but the face ID unlock is a welcome change to the Honor 10. But like I said, do beware that your doppelganger (if you have one) may be able to unlock your smartphone.

Would I buy it? Personally, the size of the screen and the flashy look of the two-tone glass back isn’t something I would prefer, and I would look at other options. I could recommend buying it but only if you’re really into the looks and size.

The truth is there are so many mid-range devices today in the market as it’s such a competitive segment and it would do you well to check out the competition before committing.