THE third quarter of the year usually sees smartphone brands debut their second round of flagship devices. In Samsung’s case, its the Galaxy Note 9.

Being pioneers of the phablet movement and general popularisation of large screen devices, expectations for the Note 9’s success runs high. So is it something exciting or does it offer more of the same?

Upon picking up the Note 9, a feeling of deja vu washed over me. It looks almost like the Note 8 with its glass front and rear, though it is more square. The design language is safe but a little boring in comparison to some other phones that have been released this year.

This is a very big smartphone, so if you have reservations about using a big phone you should test the size out in the shop first before buying it.

I liked the fact that the Note 9 is still rated IP68 for water- and dust-resistance. It’s a hallmark feature that I appreciate and allows me to use the phone without fear whether it rains or shines.

Having small hands, I felt it was a little challenging to navigate the Note 9’s massive 6.4-inch Super AMOLED display with one hand. The two-handed operation was a must in my experience.

The Note 9 has one of the best screens I’ve laid eyes on this year, delivering exceptionally punchy and vibrant colours without being over-saturated. I thoroughly enjoyed reading websites, e-books and watching the occasional YouTube video all without the presence of a notch.

Even while walking around outdoors, I found using the phone to be perfectly viewable thanks to the display’s exceptional brightness.

Looking at the phone, there are some similar features on it. The 8-Megapixel selfie camera, for example, has remained in the same spot next to the front speaker. The button placements on the side are the same with the power button on the right and the volume rocker on the left with the Bixby button below it.

Like the Galaxy S9, Samsung adjusted the position of the reader to be below the camera instead of beside it.

Following in the footsteps of the Galaxy S9, the Note 9 also has stereo speakers on the bottom and front. I found the sound quality to be great and loud enough for listening to videos while on the go. 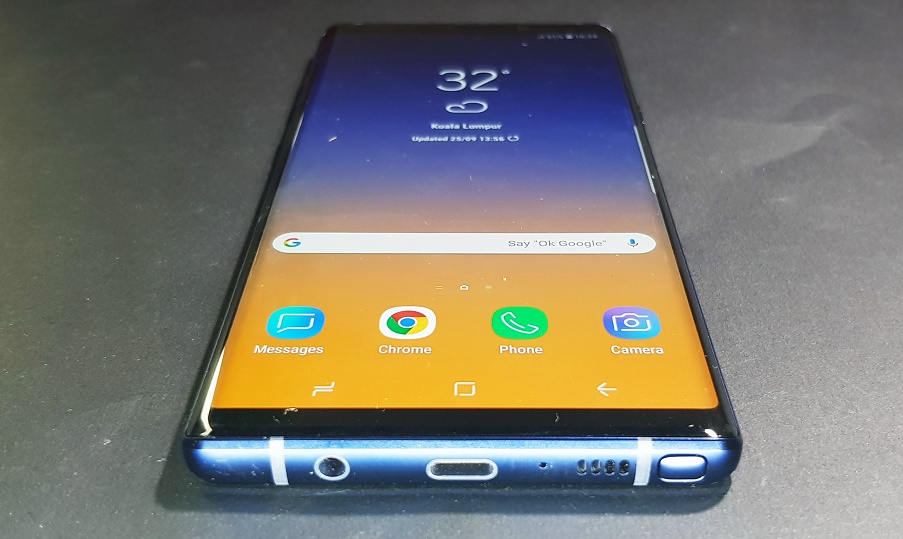 The Note 9 happens to be one of the few premium Android smartphones that still has a 3.5mm headphone jack and comes with wired headphones tuned by AKG. So it is great if you have old headphones lying around.

Not forgetting the Note 9’s most unique feature, the S Pen is found in the dock underneath the phone. More about this when we explore the use of the S Pen in detail.

Samsung has claimed that the Note 9 is a powerful device, given its flagship status. The Exynos 9810 processor found within is the same as the one used on the Galaxy S9.

Having used the S9 for some time now, I have a rough idea of what the Note 9 is capable of. Though to the Note 9’s benefit, it comes with 6GB of RAM, which is useful for multitasking between applications.

As far as benchmarks are concerned, the Note 9 pretty much blows most of the results out of the water so I won’t go into much detail here.

In terms of my experience using the Note 9, I found it to be enjoyable, smooth and responsive overall. Daily tasks like web surfing, email checking and social media browsing all ran fine and I have no complaints.

The Samsung Experience User Interface, for the most part, is serviceable and doesn’t bog you down with too much bloatware which I like. During the setup process, you can even state which of Samsung’s software you want to install, which is a nice touch.

But one negative aspect for me is the Note 9’s the insistence on using Bixby, Samsung’s voice-powered virtual assistant. I am much more accustomed to Google Assistant.

That button can’t be disabled or even remapped to another app. I have also, on several occasions, accidentally pressed the Bixby button when I wanted to change the volume.

The review unit came with 128GB of storage which I found to be ample for all the photos and videos I have captured as well as for all my apps.

This is on top of having the option to expand the storage with a microSD card. That is simply insane as I can’t imagine anyone needing so much room. There is even a 512GB version of the Note 9 if you need even more space.

You also get wireless quick charging which is great if you like the hassle of plugging and unplugging wires.

Even when I was using the Note 9 on Quad HD resolution it was able to last at least 14 hours through an entire workday. Reducing the screen resolution down to FullHD simply extended that battery life to well on into the next day.

So all in all, this is a great phone if you are a heavy user.

The Note’s mainstay feature, the S Pen has received a noteworthy upgrade (pun intended) with Bluetooth connectivity. Now you can do more than just write and draw with it. In fact, you can perform actions like snap a picture, control presentation slides or browse the next photo in your gallery by clicking the button on the stylus.

Though I rarely found myself using this feature, I can see the appeal if I was doing a presentation with my phone hooked up to a display or taking a big group photo with my phone propped on a tripod. The Note series typically benefits from the enhanced optics from the Galaxy S series from earlier in the year and the Note 9 is no exception.

The dual 12-Megapixel cameras on the back offer great versatility, with the option to shoot wide or telephoto at 2x zoom. The primary lens has a variable aperture feature that alternates between f/2.4 for normal daylight shots and opens wider to f/1.5 when in low light.

In practice, the camera’s performance was really good regardless of the situation I was in. The Note 9 adds an artificial intelligence (AI) mode called Scene Optimiser that automatically detects scenes and adjusts the settings accordingly. It is a handy features for those who don’t want to fuss over settings but I disabled it during most of my tests.

As I do take a lot of photos throughout the day, I found it quite useful that the Note 9 has a Flaw Detection feature that notifies you if a photo is not clear or if someone has blinked in a photo, prompting a retake.

When it comes to quality, the Note 9 produces some really stellar photos that are rich in detail and colour reproduction that is faithful to what you see in real life. The low light is really good as photos appear much brighter and there is minimal noise or grainy textures.

Video quality was also very good and since you can record up to 4K UHD quality, you can really pick out the details in subjects. Most impressive was the image stabilisation that kept videos looking smooth even when handheld. 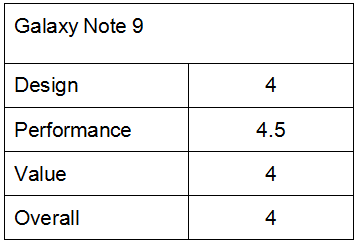 So comes the big question. Should you buy the Note 9? If you are switching from another phone entirely, the Note 9 ticks all the right boxes. A notch-less big screen. Check. Powerful enough to handle every app you can throw at it. Check. A terrific dual camera setup for great photos. Check.

To be honest, even if you are a Note 8 user, the very fact that it has a bigger and longer-lasting battery may just tip you over. However, the Note 9 doesn’t feel different enough to warrant such an upgrade.

What I don’t like about the Note 9 is Samsung’s insistence on using Bixby. Even more irritating is the Bixby button which you can’t reassign.

As the Note 9 packs a lot of premium features, it does come at a hefty US$894 (RM3,699) price tag for the base 128GB model. Given that there are plenty of cheaper alternatives on the market, including its older Note 8 sibling, the Note 9 may only be reserved for those who demand the very best and nothing less.