To give players the freedom of choice and replayability, many video games feature moral choices that will alter various aspects of the game – how the story plays out, the ending, your character’s reputation with non-playable characters, and even the availability of certain quests. But in many of these games, the characters you play don’t feel inherently evil – that their morally-dubious choices are often forced, or, well, chosen by you.

However, there are various titles such as Dungeon Keeper, Overlord, Evil Genius, Disgaea, Rampage and Party Hard that put players in the shoes of the evilest, and most feared entity in that games’ universe. There are no moral choices here: just good old fashioned tyranny and annihilation.

Now you can add another title to the list: Necronator: Dead Wrong by Indonesian studio, Toge Productions.

Light on story, heavy on humour Necronator is set in a fantasy world filled with magic and monsters. Players take on the role of a fresh graduate from the Undead Academy, who aspires to become the Dark Lord of Livmore. To achieve this, you have to conquer multiple kingdoms with strategic use of your fearsome horde of beasties and a slew of powerful spells.

While the storyline and plot aren’t the most nuanced or rich, it is a serviceable one. With that being said, the dialogue from enemy commanders or your sidekick, Chubat, are very well-written and inject a dose of humour into the game. Expect to have a few laugh-out-loud moments when reading the quips or threats that pop up every once in a while. The comedic writing also meshes very nicely with the anime- and manga-inspired art style during the dialogue segments. If these segments had voice-acting, I would be convinced that I was watching an anime.

“We wanted to give players the experience of knowing what it is like to be on the other side. Also, one of the main themes we wanted to deliver with Necronator is comedy and humour, so players will see the fun and silly side of being the ‘bad guy’ even though they are wreaking havoc throughout the land,” explained Frederick Tirta, production manager for Necronator.

A good mix of genres In terms of gameplay, Necronator is essentially a lane defense game where you will have to destroy your enemy’s stronghold or survive for a certain duration to win. Each battle takes place on a map with either single or multiple routes where the enemy will send troops randomly. You will have to retaliate by sending your own minions down these routes and prevent the enemy from damaging and destroying your Soulspawn Crystal.

This may sound simple, but it requires a balance of strategy and timing as you have a limited mana pool that reduces every time a monster is sent out to the field, or when a spell is used. Each monster and spell also has different mana costs to play – the more powerful the monster or spell, the more mana is required.

While mana does regenerate over time, it is painfully slow at the beginning of a battle but gets faster when you successfully conquer or haunt enemy towns that are located around the map. These towns aren’t just sitting ducks, though, as they also act as a powerful defense for the lanes they are on and can easily dispatch squads of your minions. The good news is, once you’ve haunted these towns, they will serve you and attack on your behalf instead. To further emphasise balance and strategy, Necronator also draws inspiration from Trading Card Games. Monsters and spells come in the form of cards, so you can only spawn monsters or cast spells that are in your hand. Once you have run out of cards, you redraw a new hand. You can even redraw a new hand at the cost of mana, if you have some to spare.

New cards can be purchased and upgraded from a vendor outside of battles or received as rewards after a battle or random encounters. Having a deck with plenty of cards might seem like a winning strategy at first, but it could cause headaches as you might not get the cards you need, especially during the start of a battle where you will need to spawn cheaper units. So again, it is all about having a balanced deck of fodder units, strong units and a variety of spells to heal or enhance your minions.

Last but not least, Necronator also plays out like a roguelite game. Damage to your Soulspawn Crystal is carried over to the next battle and while you can restore its hitpoints at inns, this would cause you to lose the chance to either remove a problematic card or upgrade a card. Furthermore, if you are defeated, you lose all progress and relics. However, the commander you chose will gain experience, level up and receive new skills that will help for the next playthrough.

This actually makes Necronator highly replayable as you have three different commanders with three different playstyles. Each battle is also fairly quick to complete, taking about a minute or two. It is great for a quick break during lunch or after work, but I did find myself playing it for hours without realising how much time actually passed. 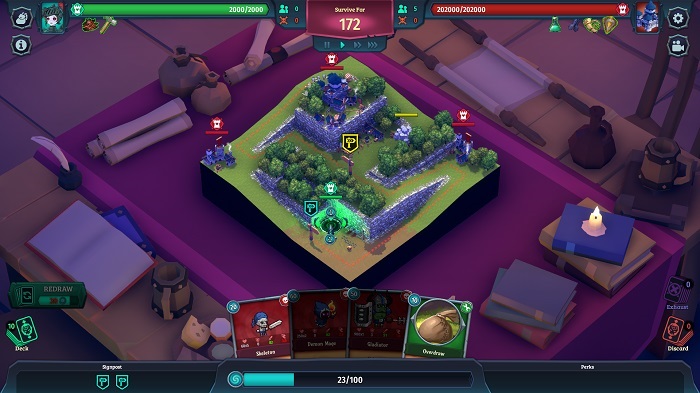 Similar to Toge Productions’ zombie simulator, Infectonator, this game also relies on a combination of pixel-art for the units and low-poly 3D backgrounds and props. The design of the units is also incredibly quirky, ranging from your standard orcs and skeletons to giant one-eyed teddy bears. I also liked the fact that battles take place on what looks like a 3D map for a tabletop game.

One of the other great things about Necronator is how much support the development team is still providing, with new features still being added to the game. According to Frederick, there are currently plans for DLC but the team is still hard at work on adding new additions to the base game. On top of that, they have recently added support for modding tools, which allow players to customise their own units, scenarios and mods to the game.

All in all, for its asking price, there is really quite a lot of fun to be had with Necronator: Dead Wrong. With frequent updates and support for mods, there is a sense of longevity for it. Just be warned, you might boot the game up for a battle or two, but end up spending hours on it.