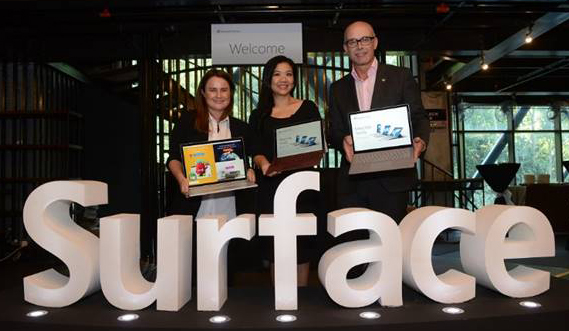 MICROSOFT has launched its first full-fledged laptop, the Surface Laptop, as well as what it claims to be the one of the most powerful two-in-one devices in the market with the Surface Book 2 in Malaysia on March 13.

Speaking to the media during the launch, Microsoft Malaysia chief marketing and operations officer Michal Golebiewski said with the two new devices, Microsoft wants to empower every person and organisation to achieve more, and the launch is a direct reflection of its ambition.

Golebiewski said that as the world is changing, people want to more flexible. This includes not only professionals but also the younger generation, including students.

“It’s no longer just about working nine-to-five,” he argued. “People today need to be flexible, move from one task to another or from one service to another. And they need one device to be flexible, creative and productive,” he said, adding that these new devices do the job.

Golebiewski however acknowledged that it took some time for Microsoft to create these two new products, and that now that it has, they have all the right devices for different needs.

“When we created the Surface Family, we had this in mind. Based on our customers’ feedback, we are proud to introduce the new Surface Family products to Malaysia,” he said.

The global PC (including laptops) market has been on a decline in the past few years, according to an analyst firm. Gartner noted that worldwide PC shipments fell 2.8% for the year 2017.The market researcher said the top PC vendor today is HP Inc, followed by Lenovo Group Ltd, Dell Inc and Apple Inc.

However rival researcher, International Data Corp (IDC), noted that in the fourth quarter of 2017, PC shipments rose for the first time in six years, as 2017 marked the most stable year for the PC market since 2011 with an annual shipment volume of 259.5 million units, reported ZDNet.

An industry insider who spoke to Digital News Asia (DNA) anonymously noted that whilst Redmond, Washington-based Microsoft is undoubtedly designing some well-accepted machines in the market, the company as a laptop maker is targeting very niche markets.

“There is a delicate balance the company needs to have between making its own devices and providing the underlying Windows OS to its partners such as HP, Lenovo and Dell,” the insider argued.

“It’s clear that Microsoft needs to continue making hardware to show that it has the prowess to do so, but it will remain a niche player with these products.”

A straw poll taken by DNA concluded that every day, ordinary buyers found the price range of the new Surface Laptop and Surface Book 2 far too high, given that there are more affordable alternatives in the market (see below for pricing).

The Surface Laptop is the first of its kind and is equipped with a seventh generation Intel Core processor and boasts of up to 14.5 hours of battery life. It weighs just 1.25kg and is 14.5mm thin.

Additionally, the device features a signature keyboard covered in luxurious Alcantara material, along with a quiet and responsive keyset, large precision trackpad, and soft palm rest for a new level of typing comfort. Full specifications can be found here. Meanwhile, the Surface Book 2 features the latest eighth generation Intel Core processors and the best graphics performance yet with the latest NVIDIA GeForce GPUs. Microsoft claims the two-in-one device is up to five times more powerful than the original. More on its specifications can be found here.

One of the more interesting capabilities of the Surface Book 2 is that it supports four different modes, including Studio Mode, Laptop Mode, View Mode, or even Tablet mode by simply detaching the screen. The Surface Book 2 will be available in 13.5” or 15” options and boasts an almost all-day-long 17-hour battery life.

The recommended retail price for the Surface Book 2 and Surface Laptop are as follows: