AS China’s smartphone giants like Xiaomi, Lenovo and Huawei find success on foreign shores, smaller players like Meizu are charting a similar strategy, marketing a portfolio of relatively high-end devices at low prices.

Meizu’s latest offering is the Meizu M1 Note, a 5.5-inch phablet that seems to have taken its design inspiration from the iPhone 5C. Available in the familiar pastel hues of blue, green, pink and yellow, as well as the standard white, Meizu has also opted for a similar hard, glossy plastic finish on the back cover. It’s a fingerprint magnet, no doubt, but the stickiness of the material means it won’t slip off your hands easily.

Some other reviews of this device have mentioned that it’s a tad slippery to hold, but that’s not been our experience at all. Perhaps the tropical climate has something to do with the device sticking firmly to our grimy, sweaty palms (pic, below). With the back gently tapering on all four sides, coupled with the relatively light 145 grams, the M1 Note feels assuring and comfortable in the hand. Meizu managed to also reduce the size of the bezels around the display, making the phone feel smaller than a typical phablet. The volume keys are on the left side, accessible easily with your thumb (if you’re holding it with your left hand) or your index finger, while the micro SIM card tray (supporting a 4G and a 2G SIM card) is on the right, accessible using a pin (provided inbox). The 3.5mm audio jack sits at the top, along with the power button, which unfortunately, can be a little hard to reach at times. Throughout our test, we had to rely on screen gestures to wake the phone up or turn the screen off, as an alternative to stretching our thumbs to press the somewhat stiff power button.

On the bezel below the screen, sits a single backlit capacitive touch key that calls up the default home screen. Swiping up from the key activates the ‘Back’ function. Holding down the key turns off the display. At the bottom you will find the micro USB port, flanked by the microphone and a single speaker grille, which design-wise, bears more than a slight resemblance to the aforementioned Apple product.  When held horizontally, you’ll need to ensure that your palm doesn’t cover the grille because that effectively blocks all sound from the unit. Unlike many Chinese-branded smartphones that ape the designs out of Cupertino but come with low-tech specs, the M1 Note’s innards are actually very respectable (see Specs Box at the beginning of this review).

Powered by the latest 64-bit SoC (System on a Chip) from Taiwanese chipset giant MediaTek (MTK), the MT6752 octa-core chipset running at 1.7GHz is paired with an equally competent Mali T760MP2 graphics processor running at 700MHz, providing more than enough horsepower to ensure a smooth and lag-free Android experience.

Interestingly, the MT6752 SoC seems to be a current favourite among smartphone manufacturers, as we can count at least six Chinese vendors that have, or plan to launch, mid-range hero devices using this chipset, within the first quarter of 2015 alone. (We will put these devices through the DNA Test in a future article).

Meizu has also fitted the M1 Note with 2GB of memory and a choice of 16 or 32GB of storage. There is no room for an additional memory card, so our recommendation is to go for the 32GB version if you like to install lots of apps and games, or if you have a huge appetite for downloaded music and videos.

A 5.5-inch Full HD (1080 x 1920) IPS (in-plane switching) display adorns the M1 Note, providing a pixel density of around 403 PPI (pixels per inch). This is a clear standout from the typical HD (720 x 1280) screens found on most medium-tier devices on the market. Text and images came out looking nice and sharp, and videos looked great especially on a screen size that’s ideal for movie consumption. This screen also comes with technologies that Meizu claims improve energy efficiency, as well as reduce reflections by up to 75%. Corning’s Gorilla Glass 3 is included to protect the display against scratches, but most people would apply a protective film on top anyway.

More importantly, you can see what’s on the screen from very wide angles, useful if more than one person is sharing the screen. The colours are rich but not as saturated compared with a Super AMOLED (think Samsung Galaxy S series) display. We also felt the blacks could have been deeper.

The M1 Note is fitted with a 13-megapixel rear camera with a maximum aperture of f/2.2 and processed by a Samsung imaging sensor. A dual-tone LED flash sits right below the lens, providing better flash photography results. 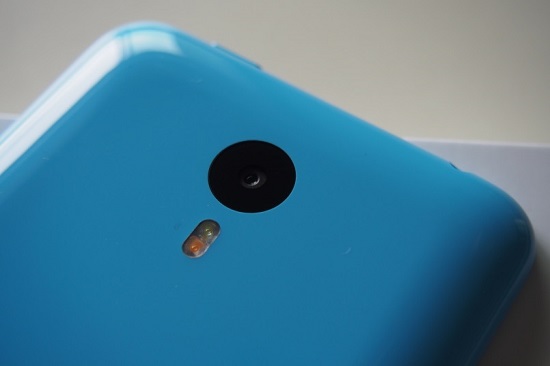 Due to sensor’s size, 13-megapixel photographs can only be captured using the default 4:3 aspect ratio. Should you wish to have a widescreen 16:9 photo, you’ll need to set it to nine megapixels instead.

At the front you will find a 5-megapixel camera with an even brighter f/2.0 aperture (for improved low-light selfies) and a 69° wide-angle lens that’s good for capturing four to five people in a selfie photo (using an outstretched arm, not a selfie stick) without the fish-eye type distortions found on wider lenses.

The camera software relies on swipe gestures across the screen to switch modes, which may not be obvious to everyone at the outset. The modes available are Auto, Manual, Beauty, Panorama, Light field, Scan and Slow-motion. Each mode calls up different controls on the interface. Scan mode provides a quick way to capture QR codes while Slow-motion mode lets you record up to 60 seconds of video that can be played back at a third of the speed. Separately, there’s a Settings switch that allows you to turn on HDR mode (pic, above) for high contrast situations, grid lines on the display, a timer, and photo and video resolutions options.

The photos we captured turned out sharp most of the time, but there were occasions when the autofocus function failed to deliver. The solution is to simply tap on the subject you want to focus on before tapping the shutter button.

Alternatively you could take multiple shots since there is no shutter lag, or if you prefer, press and hold the shutter button to take 30 continuous shots in three seconds. There is no optical image stabilisation feature, so make sure you have a steady hand. Colour reproduction is excellent under good lighting conditions. In low-light situations, the autofocus still worked, but the images turned out either grainy or blurred due to camera shake or a moving subject, a result of slower shutter speeds.

For best results, we recommend using the flash in backlit or dark situations, as it regulates the brightness and colour tone of the flash to produce more natural looking skin tones.

We were pleasantly surprised by the performance of the device, or more specifically, the chipset that’s powering the M1 Note. Unlike past MediaTek chipsets which trailed against rival Qualcomm’s Snapdragon processors, the MT6752 scored very well in performance benchmarks and in real-world usage, was very smooth.

Phone calls were clear and there were no dropped lines, although the loudspeaker didn’t perform as well as we expected, with the voice coming across slightly soft and sometimes garbled. Using a headset provide a much better experience. We didn’t experience any lag whatsoever with Meizu’s Flyme OS (operating system), a customised version of the Android 4.4.4 KitKat operating system. Apps were fast to download from Google Play (especially on a 4G network) and quick to install.

Graphically-intensive games like Fast & Furious Legacy performed well on the Meizu M1 Note. That’s not to say it didn’t struggle sometimes, as certain levels on Rayman Fiesta Run still managed to slow down the device.

High-definition videos from YouTube streamed well and we suffered no silent pauses on Spotify, as network streaming on both 4G and WiFi worked seamlessly. The M1 Note also supports dual-band 2.5GHz and 5GHz WiFi connections and Bluetooth 4.0, but there is no NFC (near-field communications) included.

Google Maps worked without a hitch, with the GPS signal established within 20 seconds – an improvement over MediaTek’s past performance.

In terms of battery life, the 3140 mAh battery was enough to last an entire day from six in the morning till just past midnight, before it required to be plugged in.

This was based on a relatively high usage pattern, consisting of an hour of phone calls, web browsing and e-mails throughout the day, 20 minutes of Google Maps navigation, shooting about 30 photos with the flash activated, playing half an hour of games, and streaming two hours of music.

All this, while connected to an Android Wear smartwatch. The power setting was set at the ‘Balanced’ level and display set at ‘Automatic.’

Overall, the performance and battery life of the device more than meets expectations for a mid-range smartphone, and users would rarely experience any frustrations in this area.

As mentioned, the M1 Note runs on a customised version of Android 4.4.4, called Flyme OS, currently in Version 4. Similar to other China-based Android OS enhancements (known in the industry as Roms) such as MIUI from Xiaomi, the Flyme OS launcher takes the Apple iOS approach and does away with the app drawer, placing all the available apps on the home screens. A dock at the bottom of the screen lets you drag your four favourite apps there for easy access. You can also create your own folders on these home pages or add useful widgets to them.

Among the notable highlights of the Flyme OS are the customisable themes (pic, below) and wallpapers, as well as a notification bar that includes shortcut toggles to the smartphone’s main functions. The settings menu (pic, below) is quite different from the typical Android layout, with small icons on the left providing an indication of the different options. Among them are gesture controls, which can be used to activate apps or wake the device from standby using simple swipes. It still requires some getting used to and experimentation to fully appreciate everything that Flyme OS has to offer, but like all Android devices, you can easily change the launcher to Google’s own Google Now launcher if you prefer an unadulterated Android interface.

In terms of upgrades, Meizu has informed its users (in China, at least), that the Android 5 Lollipop upgrade will be made available to Note M1 devices in June 2015.

While this price may still be beyond what many consumers are willing to fork out for a relatively unknown brand in our markets, it does represent good value for a smartphone with higher-than-expected specifications and build quality.

For Malaysian consumers who pre-ordered the device from Meizu’s local website (it comes with a one-year warranty), the company will be shipping out the M1 Note smartphones beginning March 30.  In Singapore, users will have to rely on online retailers to obtain a unit. A 5.5-inch phablet of respectable quality, decent performance and surprisingly affordable, Meizu proves that its range of colourfully plastic Android smartphones can trump the best of the Chinese big boys in the mid-range game, despite the obvious design nod to the Apple iPhone 5C.