XIAOMI’S devices have made significant inroads into the Malaysian market, what with the Chinese  company’s online retail strategy that minimises investment into brick-and-mortar stores, combined with well-specced yet aggressively-priced smartphones.

The latest addition in its Malaysian line-up, the Mi4i, blends a Snapdragon 615 processor, a Full HD display and a 13-megapixel Sony or Samsung sourced camera, into a casing with a sub-RM750 price point.

In Malaysia, the Mi4i currently only comes in a shade of matte white, though it has been spotted in black and several pastel shades in other markets.

Externally, the Mi4i looks very well constructed despite its RM749 price tag. The casing is 7.8mm thick, with a matte finish on the polycarbonate backplate that repels fingerprints and adds a modicum of grip to prevent it from slipping when held. The left side of the Mi4i’s backplate contains a 13-megapixel Samsung or Sony sourced camera that has an F/2.0 aperture and a soft two-toned LED flash for capturing less harsh skin tones. A silver MI logo emblazons the bottom of the back-plate, which also has a series of precision-machined holes for the phone's speakers.

One particular interesting addition to the design is a subtle raised nub of plastic at the base of the speaker grille, to prop the phone slightly up when placed on a flat surface to ensure that the phone is not muffled when in use.

The backplate is not removable without special tools, and hides access to the built-in 3,120mAh battery that is also non-removable – which means you can’t swap it for a spare when you’re outdoors.

The battery is however larger than the norm for something in the Mi4i’s price category and size.

The right side of the phone comes with a power button and a volume rocker made of plastic, with a silvery finish. The buttons are responsive, though the button edges feel somewhat rough and detract from the otherwise polished feel of the phone.

The left side contains a port that allows access to a dual micro SIM card tray. Unlike recent offerings from other Chinese brands like Huawei or Oppo, the Mi4i lacks a microSD card slot or the option to trade one SIM card slot for an SD card for storage.

Both dual-standby SIM card slots support Cat 4 LTE connectivity. The top comes with a 3.5mm audio jack while the base has a micro USB port for charging the phone. The 5-inch 1080P touchscreen up front comes with a crisp 441PPI, along with a trio of backlit capacitive shortcut buttons at the bottom of the display to access Menu, Home and Back.

The top edge of the display comes with a 5-megapixel selfie camera with an f/1.8 aperture. The Mi4i runs Android Lollipop 5.0.2 out of the box on a second generation 64-bit octa-core Snapdragon 615 processor that clocks in at 1.7GHz on one set of quad-cores, and 1.1GHz on another quad-core.

The phone also comes with 2GB RAM and a paltry 16GB of onboard memory.

Minus the firmware, you only have an effective 10.4GB of usable storage for apps, photos, games and whatnot.

If you happen to be a power user or someone who totes around a fairly large music or e-book collection, you’ll find this a major flaw. With such limited storage for a phone, you’ll have to be diligent with daily housekeeping and regularly upload anything you want to the cloud.

While Samsung has gone down this path with the Galaxy S6 and S6 edge, its phones pack a vastly more substantial 32GB of onboard storage at the minimum, though with a commensurately higher price tag of course.

Xiaomi’s vice president of International, Hugo Barra, described this omission of the SD card in its flagship devices as the wave of the future.

After launching the Mi4i in Hong Kong, he told Engadget that his team didn’t want to sacrifice battery capacity, ergonomics, appearance or a second SIM card slot for the sake of letting users add a microSD card slot. 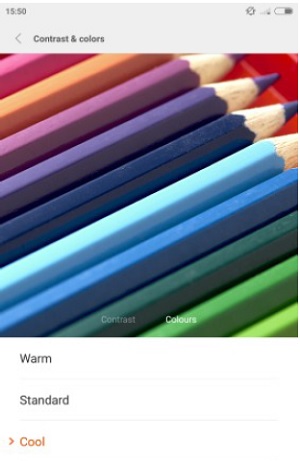 The 5-inch 1080P display on the Mi4i is bright and crisp, with good colour rendition belying its price tag. Images were displayed with excellent colours, and fonts were pin-sharp with good viewing angles.

If the display’s colour rendition doesn’t quite fit your preferences, you can opt to go into the settings and swap it to your choice of the Standard, Warm or Cool.

Something that Xiaomi took pains to elaborate is that the Mi4i has built-in hardware that dynamically adjusts the brightness of the display based on ambient sunlight settings from a front-mounted light sensor, so that the screen remains viewable even under direct sunlight.

In effect, the display brightens up dark parts of an image and darkens bright ones to ensure an image remains viewable on the display.

This feature unfortunately doesn’t work indoors, unless you have a bright light at the sensor.

The rear 13-megapixel camera has an f/2.0 aperture, a five-element lens, and comes with an array of modes and filters accessible via three panels accessible by swiping left and right.

Swipe right, and you get to select an array of filters with effects that you can view in real time. Swipe left, and you get access to a panorama mode, night mode, manual, beautify mode and a refocus mode that helps to artistically defocus the background when you take a shot.

The camera also has an HDR mode that lets you default between turning it off or on with either Live HDR or Enhanced HDR mode. Videos are captured in 1080P at 30fps. Images captured on the rear camera offer good detail and lively colours onscreen under well-lit daylight conditions, with HDR mode offering comparatively better results in areas with shadows, salvaging shadow shrouded images that would usually end up as a featureless swath of colour. Images captured under low light are viewable, though you’ll need a steady hand and flash to get good results. There’s still quite a bit of noise, though the stills are still very viewable.

The Asus ZenFone 2 still does a better job under bad light conditions. Captured videos are relatively smooth with good colours and details. You also have the option of a time lapse or a slow motion mode, as well as the option of capturing it in Full HD, 720P or standard definition.

An image stabilisation mode is available though you can only implement it at up to 720P resolution.

The front selfie camera has a skin smoothening beauty mode that minimises wrinkles that is on by default, though you can dial the effect down or turn it off. An age-guessing feature is also integrated into the firmware that has the Mi4i guess the subject’s age, though it’s not particularly accurate. It’s fun as a lark though.

For the price you’re paying, you get a pretty good camera that’s more than sufficient for the usual use cases for a smartphone – social media, selfies, short videos, and the odd printout or two.

The Mi4i runs Android Lollipop 5.0.2 with Xiaomi’s latest version of its own user interface, MIUI version 6.5.6, overlaying it.

Four customisable shortcuts that can be swapped for any app on the phone are at the bottom, and like previous versions of MIUI, the phone lacks an app drawer. 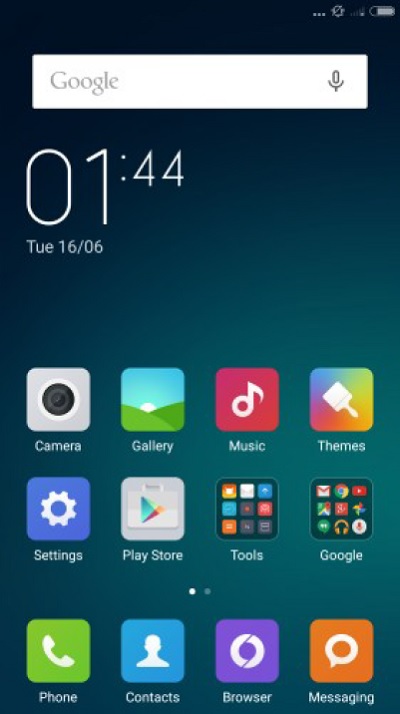 MIUI also has a fairly extensive array of apps for housekeeping purposes, and allows for extensive control of permissions down to the app level, as well as the ability to swap themes from a selection of extensively customised ones that alter ringtones, icons and homescreens available for free download. The user interface allows for users to determine, on an app level, which apps can autostart, which can use data, and more. It’s quite well done, though it’s nested somewhat deeply in the menus such that casual users may not be able to uncover it on their first few run-throughs with the phone.

Over the course of a month as a primary phone, the Mi4i did an able job without any hint of lag, while handling calls, web browsing, e-mail, the odd YouTube clip or two, as well as the occasional indulgence in Candy Crush.

It did however get somewhat warm when running processor-intensive apps.

Audio playback was adequate, though the Mi4i isn’t the loudest or clearest phone we’ve tested.

Video playback was excellent, with support for most codecs including MKV and RMVB, and it even supports FLAC files, though the weak speakers detract from the experience.

Battery life on the Mi4i was excellent and easily lasted more than a day, which isn’t a surprise seeing that the size of the battery exceeds even the Galaxy S6, which easily costs three times more.

Overall, the Xiaomi Mi 4i shines on account of an up-to-date OS, a good camera, and all-day battery life, though the lack of expandable storage detracts from what is otherwise an excellent bargain.