BACK in October, I reviewed the Samsung Gear Fit2 Pro, and found it to be a pretty capable fitness tracker, which I define as purposefully-built devices that are biased towards tracking and capturing data points when exercising.

I also made a quick mention about how fitness trackers are different from smartwatches, which have a wider variety of functions besides just fitness functions, and also a nicer appeal if you’re attending an evening formal function.

Last year, the runaway successes for smartwatches were the Apple Watch and the Samsung Gear S3. Both had different appeals to different markets and while the Apple Watch continues to be very popular due to it being an Apple product, the Samsung Gear S3 had captured the imagination of quite a few due to its superior build quality, affordable pricing, great looks, functionality and ease of use.

Despite that, the Gear S3 had one big problem – its size. Measuring 46mm across the bezel, many felt that the watch was huge for a lot of wrists. In comparison, its predecessor, the Gear S2 only measured about 42mm, which some felt was a little too small.

In comes the Samsung Gear Sport, this year’s smartwatch offering from the South Korean giant launched in October. The Gear Sport compromises on size with a bezel measurement at 43mm, which many believe is the perfect size for most wrists but at the same time retains the best of what the Gear S3 had to offer – premium build, all metal finishing (as opposed to the S2) and an affordable price at RM1,299. 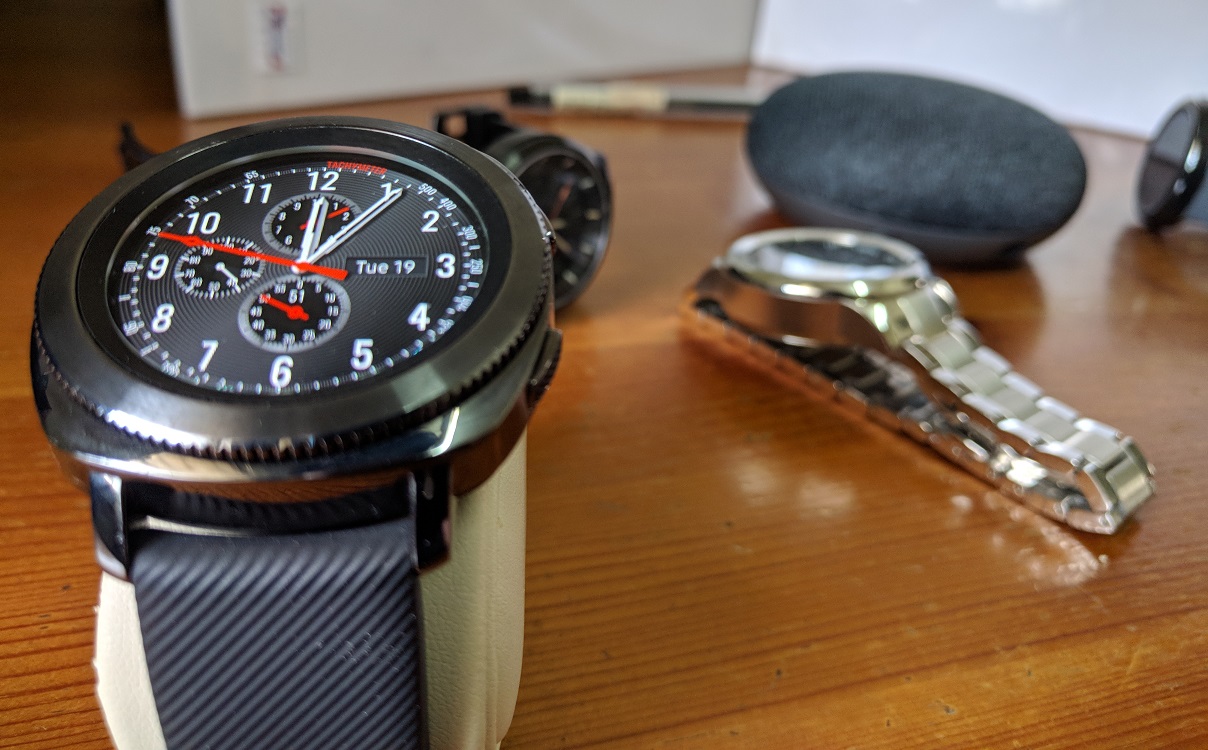 Being an owner of the S2 myself, I’ve been itching to review the Gear Sport for a while now. When the Gear S3 first came out, I, like many others, did not feel the urge to upgrade due to its massive size. But as mentioned, the Gear Sport is a great compromise for those wanting to upgrade to a better-looking smartwatch with better specs but at the same time a manageable size.

The Gear Sport comes in two variants: the black and the blue. Both measure at 42.9 x 44.6 x 11.6mm and weigh in at 67g (with strap) / 50g (without strap). The display is a 1.2-inch 360 x 360 Super AMOLED covered in Gorilla Glass 3. The Gear Sport doesn’t support LTE connection for standalone cellular functionality.

Under the hood, it has a 1GHz processor, 4GB storage equipped with 768MB of RAM. It has a 300mAH battery and comes with the latest Tizen 3.0, proprietary software from Samsung. A more detail spec sheet can be found here.

The main attraction in the Gear Sport that’s different to both S2 and S3 is that it has water resistance of up to 5 atm, or about 50m. That’s a nice touch for those who are avid swimmers.

Looks wise, it isn’t very different to the Gear S3, just a smaller watch face. The Gear Sport comes in an all stainless steel encasing and oozes premium finish quality, worthy of being an acceptable dress watch without being too tacky as a fitness tracker at the same time.

The straps on the Gear Sport are at 20mm instead of the standard 22mm, which isn’t a big deal as there are quite a lot of 20mm 3rd-party straps that are available should you want to switch them up.

The Gear Sport has the usual front rotating bezel just like the Gear S2/ S3 and is IMHO still the best way to interact with a watch due to the small size. I found the screen to have a great resolution, bright enough for outside under sunlight usage and sensitive enough to use as a touch screen.

The bezel is also very nice to use, accurate in what it’s supposed to do – the selection of apps and features. The original straps are very comfortable to wear all day long, including while asleep. Overall, I would say that the Gear Sport has top-notch quality build, something which isn’t surprising since the S3 exudes the same kind of quality.

If there is one thing about smartwatches that everyone complains about, it must be the battery life. To be fair, smartwatches’ battery life has improved over the years as companies have managed to use software to squeeze as much out of them as best they can.

In the heydays, you couldn’t even get a day’s usage out of them but with the Gear Sport, you can easily squeeze two days out of a full charge, two-and-a-half, if you’re a really light user and do not always connect to the phone via Bluetooth.

Sure, I would understand why this still doesn’t satisfy most people but my argument is that anyone who is used to using electronic equipment these days can easily tune themselves to giving the Gear Sport a bit of a ‘spot charge’ every now and then to keep going, not to mention a longer charge at night if you’re not sleeping with it.

So, the more important question is not how long the Gear Sport lasts, but how fast the charger charges it, and this is where the Gear Sport stock wireless charger does perform well.

Of course, there are all sorts of ways you can conserve your device’s power. Turning down the brightness, not connecting the smartwatch to your phone 24/7, listening to your music sparingly instead of all the time, turning off the GPS and WiFi functionality are but some of the ways.

If all that fails, the Gear Sport like its predecessors, comes equipped with a power-saving mode, which turns off the functions of all the features save the clock which tells time in black and white.

But like I’ve said, if you’re a power user, it should still last you just short of two days’ usage before having to charge it up again.

Performance wise, I’ve no complaints about the Gear Sport. Every feature works well including the GPS, the offline music playing, the fitness and step tracking, and the water resistance during swimming.

Next page: It’s all about form and function