JUST two weeks after reporting dismal second quarter results that saw an 8.3% drop in sales in its IT and Mobile division due to “muted” smartphone sales, Samsung Electronics is hoping to turn things around with the update to its popular Galaxy Note series.

At the ‘Samsung Unpacked’ event in New York, USA on August 14, the company unveiled its latest iteration of its premium large-screen smartphone, the Galaxy Note 5, along with a larger version of its current Galaxy S6 edge flagship smartphone.

Also known in the industry as ‘phablets’, the market for these devices with screens that span 5.3 inches (measured diagonally across) and above was pioneered by Samsung with the introduction of the original Galaxy Note in 2011.

“At Samsung, we believed in the promise that large screen smartphones could actively address some major consumers pain points by providing users with a better viewing experience and more productivity on-the-go,” said JK Shin, CEO and President of IT & Mobile Division, Samsung Electronics (pic below). “Today, the journey continues in the large screen category that Samsung created,” Shin told the audience at the event.  “And we are still betting big.”
By that, Shin probably means coming up with not one, but two phablets to target different market segments.

In a statement, Samsung is pitching the Galaxy Note 5 towards ‘multi-taskers’, offering improved handwriting capabilities with the bundled S Pen stylus, along with annotation and web-clipping tools.

The Galaxy Note series has always come with a stylus, but the enhanced S Pen features new tricks, including the ability to write on the standby screen right away without unlocking the phone.

Meanwhile, the Galaxy S6 edge+ is aimed at users who prefer the unique curved edge screen design of the original S6 edge, but now with even more screen real estate.  Samsung also improved the functionality of the curved screen with ‘Apps edge’, allowing users to call up their favourite apps by swiping the edge display. 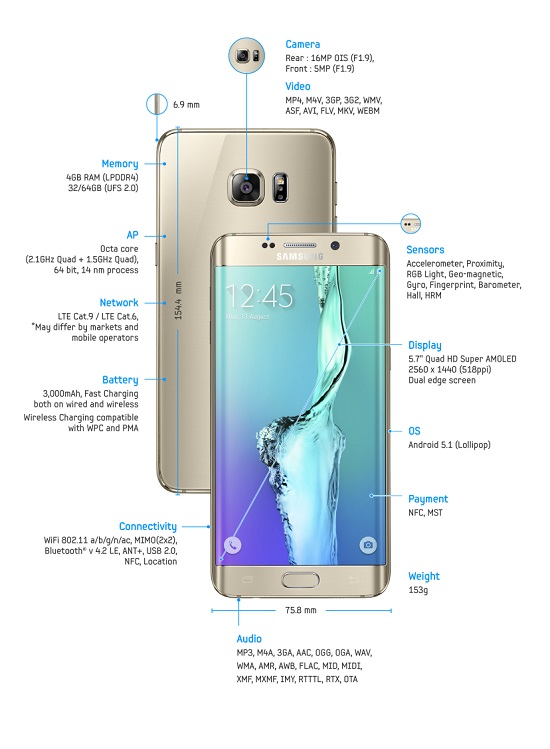 Aside from the stylus and curved display features, both the Note 5 and S6 edge+ share exactly the same hardware specifications (pic above), namely the Exynos 7420 octa-core chipset, a 5.7-inch Quad HD (2560 x 1440 resolution) Super AMOLED display, 16 megapixel rear camera and 5 megapixel front camera, a 3000 mAh battery that supports fast charging and wireless charging, 4GB of memory and a choice of 32 or 64GB of built-in storage.

However, following a similar design philosophy with its premium Galaxy S6, Samsung dropped the support for expandable micro SD card storage, and made the battery non-removable on the Note 5.

This caused a wave of criticism among some online commentators and tech media, who say that expandable storage and removable batteries were part of Samsung’s main selling points and differentiating factors against Apple’s iPhone.

Speaking to Reuters, Jonathan Roubini, editor-in-chief of Lab Reviews said, “The phones are not different enough, so that’s why it’s very hard for them to gain that market share from Apple”.

Still, the company seems to be betting big on its premium designs, fast processors, high resolution displays, advanced cameras and video capabilities (which lets users stream directly to YouTube), as well as wireless charging features to win over what is considered an increasingly tough crowd.

The Galaxy Note is already available for sale in Singapore for S$1088 for the 32GB model and S$1188 for the 64GB variant without a contract.  It’s available in Black and Gold colours.

The pricing and availability of the Galaxy S6 edge+ hasn’t been announced yet, but a check on Best Buy’s website in the US lists the low-end (32GB) version of the edge+ to be similar in price to the high-end (64GB) version of the Note 5.