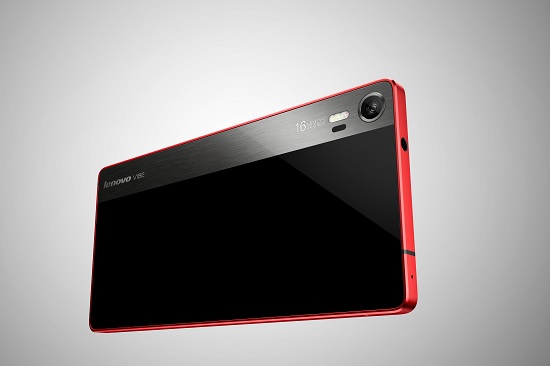 Launched during Mobile World Congress 2015 at Barcelona in February this year, the 5.0-inch device is designed to mimic a compact camera when held horizontally, complete with a two-step dedicated auto-focus and shutter button on the side.

Speaking at a launch event in Kuala Lumpur, Lenovo’s Country Lead for smartphones in Malaysia, Foo Mun Yee said, “The VIBE Shot is a stylish yet powerful smartphone that is perfect for people who want both a phone and a camera.”

The shutter button can be used to instantly activate the camera function, and comes with an infra-red auto-focusing system which the company claimed is twice as fast as conventional autofocus.

The rear camera sports a 16 megapixel BSI (back side illuminated) sensor that allows users to capture a full 16:9 widescreen photograph (as opposed to a 4:3 ratio on competing sensors).

The rear lens is made from a six-piece element construction which is claimed to enhance the clarity of the image.

However, the f2.2 aperture is decidedly average and isn’t as industry leading, compared to rival smartphones like Xiaomi’s Mi4i’s f2.0 or the Galaxy S6’s f1.9 aperture setting.  The smaller the aperture, the better the ability to capture light, especially with indoor shots and low-light environments.

Which is probably why Lenovo fitted a tri-colour LED flash – which Lenovo said is a world first for a smartphone – in order to produce more realistic skin tones while using the flash.  Many mid-range and high-end smartphones today come with two-colour LED flash components by comparison.

The other highlight of the device is Optical Image Stabilisation (OIS) which helps to reduce camera shake when taking photos, resulting in sharper images.
The front-facing camera meanwhile is an 8 megapixel shooter for higher resolution selfies, along with ‘beautification’ software to smoothen out and lighten up your skin in varying degrees.

The camera software lets users choose between Auto and Pro modes.  Auto, as the name suggests, lets the camera algorithm choose the best settings for your photo, while Pro lets you decide on a number of settings including exposure, speed and ISO. The rest of the hardware specifications are similar to other premium mid-range devices – namely a Qualcomm Snapdragon 615 octa-core processor, 3 GB of memory and 32 GB of storage, along with support for a micro SD card.

The 5-inch display is a respectable Full HD (1920 x 1080 resolution) screen with 441 (PPI) pixels per inch, while the battery is a larger-than-average 3000 mAh unit.
Software-wise the VIBE Shot comes with Android 5.1 (Lollipop) skinned with its VIBE UI (user interface).

The Chinese technology giant unveiled that the smartphone will be available in 2 colours, red and grey, and priced at RM1399.  It is expected to offer this device in Singapore for S$479 at the end of August.

At this price, it is more expensive than competing Snapdragon 615-based devices, not to mention Lenovo’s very own K80 smartphone, an Intel-based device with a larger display, 4GB of memory as well as a 4000 mAh battery with OIS features.

The launch in Malaysia and expansion to Singapore is part of the company’s strategy to focus on overseas markets and rely less on China, where its market share has fallen to fifth place.

During the company’s recent Q1 earnings statement, it announced a 51 percent fall in profits to $105 million, partly due to a weak demand from China and losses generated by its mobile arm (which includes US-based Motorola).

This has prompted a move to reduce its non-manufacturing workforce by 5 percent and an effort to streamline its mobile portfolio.