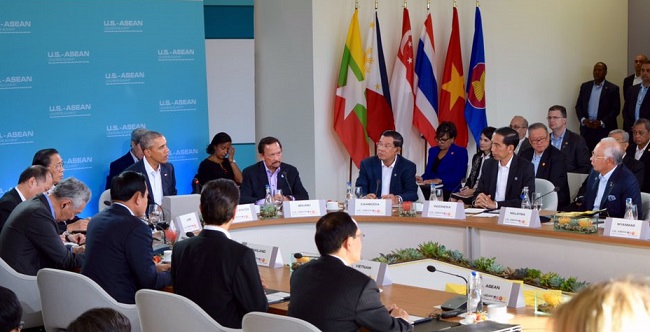 US President Barack Obama has announced the US-Asean Connect initiative, which seeks to establish a network of hubs across the Association of South-East Asian Nations (Asean) region to boost economic cooperation and also connect entrepreneurs, investors, and businesses.

At a press conference after the first day of US-Asean Summit that took place Feb 15-16 in Sunnylands, California, Obama said that all parties had agreed that entrepreneurship and innovation were the heart of modern, competitive economies.

“We had an excellent discussion with a number of pioneering business leaders, who reiterated the recipe for attracting trade and investment.

“This includes the rule of law, modern infrastructure, e-commerce, support for small and medium-sized business, and perhaps, more importantly, investment in people,” Obama said in his remarks published by the White House.

US-Asean Connect seeks to boost economic cooperation between Asean and the United States, and will see the establishment of economic offices in Bangkok, Jakarta, and Singapore “to better coordinate our economic engagement and connect more of our entrepreneurs, investors and businesses with each other,” according to Obama.

Collectively, the 10 nations of Asean are the United States’ fourth largest trading partner.

The trade in goods and services between US and Asean increased by 5% in 2015 to top US$226 billion, according to statistics provided by the White House’s Office of the Press Secretary. US trade with Asean has increased by 55% under the Obama Administration. Meanwhile, at the Summit, Indonesian President Joko ‘Jokowi’ Widodo called for Asean to put small and medium enterprises (SMEs) as a top priority, and to explore cooperation that could benefit SMEs across the region.

“SMEs in Indonesia have proven their resilience in sustaining the country’s economy, even during the global crisis,” he said during the Retreat I session of the US-Asean Summit.

“Despite being the backbone of economic resilience, SMEs often face challenges, especially in terms of capacity building, access to capital and financial facilities, access to technology and the global market, and access to regional and global chains,” he said in an official statement issued by Ministry of State Secretariat.

Jokowi suggested that US-Asean cooperation should be able to facilitate SME access to technology to enable them to become players in the digital economy.

Last year’s Asean summit in Kuala Lumpur saw the unveiling of The Asean Strategic Action Plan for SME Development 2016-2025, which aims to grow the SME sector via innovation, technology, and productivity.

The plan noted that 88.8% to 99.9% of businesses in various Asean countries are micro, small, and medium enterprises (MSMEs), which provide jobs to 51.7% to 97.2% of their respective workforces. However, the SME contribution to the region’s exports remains at only 10% to 29.9%.

To help Asean countries grow their SMEs, the United States – through the US-Asean Business Alliance backed by the US Agency for International Development (USAID) – established a portal for SME managers called Asean Online SME Academy in 2015.

US tech CEOs chime in

The three CEOs were invited by Obama to present their views on innovation and entrepreneurship at the second session of Retreat I of the Summit.

“The three CEOs emphasised the importance of technology for governments to better serve society, and also spoke about how technology can improve the economy,” Indonesia’s Minister of Foreign Affairs Retno Marsudi said in a statement.

The CEOs also stressed the essential role of public-private partnership and a good regulatory environment for further development, according to Retno.

She said that Obama also voiced similar views in a conversation with Jokowi: That technology should be able to empower SMEs and narrow the development gap.

“The bottom-line: Obama said that technology should be beneficial to the people, and this starts with education,” she added.

Meanwhile, Jokowi has landed in San Francisco and will continue with his digital economy mission at Silicon Valley, meeting the CEOs of Facebook Inc, Twitter Inc, Google Inc, and incubator Plug and Play.