By A. Asohan (with additional reporting by Karamjit Singh) May 13, 2012

JOINT research unveiled by McKinsey and Google recently has the Internet contributing 4.1% of Malaysia’s Gross Domestic Product (GDP), a rate outstripping even those of many of the world’s most developed economies.

The duo’s study, ‘Online and Upcoming: The Internet’s Impact on Aspiring Countries,’ estimates that the Internet contributed US$9.75 billion of Malaysia’s 2010 GDP US$238 billion – a 4.1% contribution slightly edging the United States’ 3.8% and Japan’s 4.0%, but far outpacing the average 1.9% of the 30 countries in the “aspiring” sector.

McKinsey defines “aspiring” nations as developing countries that “are on the cusp of becoming developed,” according to Nimal Manuel, principal at the research firm.

The 18-month study looked at 30 “aspiring” countries with a particular focus on nine: Malaysia, Argentina, Hungary, Mexico, Morocco, Nigeria, Taiwan, Turkey, and Vietnam. The results were unveiled on the sidelines of the World Economic Forum in Davos, Switzerland in late January.

The digital economy of these 30 countries was also compared to that in developed countries. A total of 57 countries were studied. The overall indicators for this cluster are promising: These 30 aspiring economies have a total of one billion Internet users, and see the birth of 143,000 Internet-related businesses every year. They have 535 million users of social networks and more than 310 million mobile devices are used to access the Net.


The indicators for Malaysia itself are promising: Broadband penetration doubled between 2008 and 2010; we have a voracious appetite for social networking, spending one out of three minutes online on such sites; we have six times as many secure servers as the average for the aspiring cluster; and Malaysian business sell more things online than many other countries with similar wealth.

But don’t break out the champagne yet: The Internet contributed only 2.3% to Malaysia’s GDP growth in 2010, right smack on the average mark for aspiring countries and far below the 21% of developed countries. To put it succinctly: We are in a great position, but not for long unless something is done. “It is worrying,” Manuel (pic) admits.

Furthermore the “Internet contribution” to GDP includes the ICT sector manufacturing devices that can connect to the Internet (includes devices for export), software and services and many other industry sectors that could only be described as traditional ICT activities, which Manuel says was an above-average contribution compared to the other aspiring countries.

“This may be counterbalanced, of course, by growth in domestic consumption and investment. That's where the push needs to be, and where the opportunity is,” he adds.


And, depending on whether you are a glass half-full or half-empty kind of person, the fact that Malaysian businesses only allocate 1% of their advertising budgets to online media could mean there is so much room for growth, or that we have been very slow off the mark. The current figure puts Malaysia at the bottom 10% of the 57 countries ranked for the study.

Domestic online consumption is also below average: Average private consumption comprises 70% of the Internet’s impact in the nine focus countries; in Malaysia, it comprises only 40%. "Private consumption" is the total consumption of goods and services by consumers via the Internet and consumers’ costs to obtain Internet access, Manuel explains.

“It encompasses personal computers and smartphone sales, B2C (business-to-consumer) e-commerce, residential broadband subscriptions, and revenue from mobile Internet use. It is important to note that private consumption is not low on an absolute basis, but rather on a relative basis given the high contribution from Internet-related ICT exports.

“For private consumption in an absolute basis, we are on the high side of aspiring countries. However there is still room for growth, given developed countries are even higher (as expected),” he adds. “Malaysia has turned up some impressive numbers, but more can be done,” Sajith Sivanandan (pic), country manager of Google Malaysia, says of the survey findings.

Like many other technology vendors, and the Malaysian government itself, Google sees the small and medium enterprise (SME) sector as a potential main driver of the digital economy, with so much room for growth – only 20% of SMEs surveyed used IT extensively in their daily operations.

In terms of powering the digital economy, Malaysia ranked respectably in terms of business environment and infrastructure (no, don’t scoff!), but had a dismal showing in terms of financial and human capital.

“We see the opportunity for greater collaboration between academia and industry to boost workforce development,” says Manuel. “And while the Malaysian government has a slew of grants and incentives, we see the need for greater private sector investment.”

He concedes that different countries take different paths. “The paths forward mentioned in our report are general guidelines and based on the current macro-economic strengths of the country.  Industry-academic collaborations in R&D are one of the ways countries have innovated, and there are other ways as well.  Driving domestic Internet consumption may be another way to drive Internet-related impact, for example.” 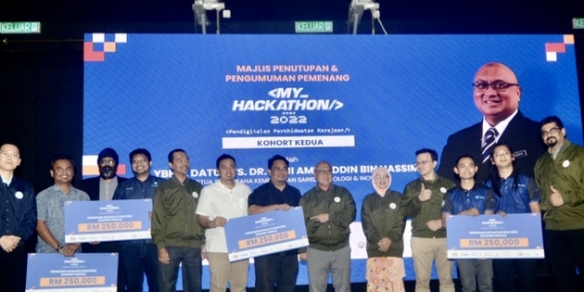