WHEN I joined Microsoft in April, 2010, most of my fellow employees were still feeling pumped up about the successful launch of the Windows 7 operating system several months before, and the rave reviews it was receiving.

“We survived Vista,” one of my new colleagues told me, referring to that much-maligned and much-delayed successor OS to Windows XP which PC World magazine crowned as “the biggest tech disappointment of 2007.”

Microsoft’s flagship productivity suite Office had seen its 2010 version released to manufacturing, and early previews were full of praise.

Now, it would seem, the company was finally back in pole position ... well, except for a teeny little problem; a tablet-sized problem, in fact. Apple’s iPad was winning hearts, minds and market share.

In the next few months, you couldn’t get away from that little machine: Not only were people buying them in large numbers, they were giving them away free in numbers just as large. “Win an iPad” was emblazoned across nearly every contest form. Sign up for just about anything – insurance policy, new bank account – and you stood a chance of winning one.

C-level executives started bringing them into boardrooms, demanding their IT departments support its use. The “Bring Your Own Device” or “Consumerization of IT” trend was not just picking up pace, it had shot into the stratosphere.

The only thing other than the iPad you could see were the tons of advertisements – on buses, billboards and newspapers – for Google Android devices.

Market reports and forecasts started coming in: 450,000 tablets to be sold in Malaysia in 2011. That was pessimistic actually: According to market research firm GfK Malaysia, sales of tablet computers reached over 260,000 units in the fourth quarter of 2011, a 509% growth compared to the same period in 2010. Another research firm, IDC, said that of the 698,000 units of personal computers that shipped in Malaysia in the fourth quarter of 2011, only 28 per cent were desktops.

Microsoft was just about nowhere in this discussion, and was seen as being in a state of denial about the reality of the post-PC era (or more accurately, the post-desktop era).

Doubly frustrating depressing for employees was the fact that the tablet form factor had been Microsoft co-founder Bill Gates’ holy grail. Even as recently as 2007, he had gone on about the virtues of such a device, while Steve Jobs insisted the desktop still had a significant role to play. Or as tech portal Gizmodo described it, Bill Gates Told Steve Jobs About the iPad in 2007.

Amongst some Microsoft employees, there was an air of quiet desperation and barely contained panic.

In the US tech media, questions about Microsoft chief executive officer Steve Ballmer’s leadership were seeing play again – why had Microsoft taken its foot off the pedal? Why had it stopped innovating? When was Microsoft going to stop living in the past, drowning in its boring, bloated software? Why didn’t it just get with the cool, innovative program that Apple and Google were making their own?

Perhaps because one does not easily ignore a multibillion-dollar business that powers much of the worldwide tech ecosystem. In 2011, Microsoft’s steadily and inexplicably growing Windows and Office revenues were worth US$18.7 billion and US$23 billion respectively. And despite competitor tablets stealing all the PR thunder, Microsoft’s OEM (original equipment manufacturer) partners sold about 336 million Windows PCs, according to Gartner.

But on the other hand, Microsoft could ill-afford to ignore the BYOD trend. It was eating into its corporate business, that high-margin market that fiscally powers much of the research and development at the company.

So last week, the Microsoft tablet surfaced, where it shed its traditional way of doing business and took a page out of Apple’s playbook – and in the process, threatens its OEM ecosystem. On June 18, at a surprise media event in a film and art studio in Hollywood, California (Apple, anyone?), Microsoft unveiled two tablets powered by its upcoming Windows 8 OS that largely wowed a skeptical tech audience. Really.

The fact that Microsoft did not provide prices and shipping dates dampened only part of the enthusiasm. The timing of the announcement probably had something to do with the fact that Google is expected to launch, this week or next, a Google-branded tablet running Android.

Ballmer, who presided at the Microsoft media event, may not have been in black turtleneck and blue jeans, but seemed to be doing an impression of former Apple chief the late Steve Jobs as he pontificated, “We believe that any intersection between human and machine can be made better when all aspects of the experience -- hardware and software -- are considered in working together.”

Well, almost, but not quite Jobs.

There was an entry-level device called the Surface running a specialized version of Windows 8 called Windows RT and powered by an ARM chipset. According to reports, it sports a 10.6-inch ClearType HD display; 32GB/64GB storage; microSD, USB 2.0 and Micro HD Video ports; 2x2 MIMO antennae; and Office 15. It weighs 676 grams and is 9.3 mm thick, and will come preloaded with a Home & Student version of Office.

The other, more “corporate” tablet, the Surface Pro, runs Windows 8 Pro, will be able to run virtually any program that you now run on your home or office computer, and is powered by an Intel “Ivy Bridge” processor. It comes with a 10.6-inch ClearType HD display; 64GB/128GB storage; microSDXC, USB 3.0, Mini DisplayPort Video ports; and 2x2 MIMO antennae; and weighs 903 grams and is 13.5 mm thick.

Among the most talked-about features for both versions is a neat little magnetic cover that also doubles as a touch keyboard, a built-in stand on the back and a wider screen. Much of the early press reports made much of Microsoft taking a page out of Apple’s playbook – the venue for the event, the focus on design and oh, let’s face it, beauty of form. There is a certain design elegance that can only come from one company tightly integrating hardware, software and services.

But really, it was also Microsoft from its own Xbox playbook – that game console that within a few years of its launch, at which many shook their heads at the time, has become a major player (no pun intended). It was what it should have done from the start with its Windows Phone 7 business, the late-in-the-day partnership with Nokia notwithstanding.

But the Apple playbook also includes going on its own – giving very little shrift to its partners, the “my way or the highway” attitude that sometimes leaves others in the lurch. It was no issue with Jobs’ company because Apple has always been an ecosystem unto its own, but Microsoft’s business has always been built on the back of its OEM partners’ success.

The fact that it is going on its own, while at the same time expecting these hardware partners to ship products running Windows 8 that will compete with the Surface tablets, is no doubt pissing off some of them.

Acer has already gone on record to dismiss Microsoft’s attempt to compete against Apple. "I don't think it will be successful because you cannot be a hardware player with two products," Oliver Ahrens, Acer's senior vice-president and president for Europe, Middle East and Africa, was quoted as saying by Reuters.

And no doubt, others feel Ahrens’ contradictory sense of betrayal and dismissal as well: "Instead of enhancing the user experience for Win 8 ... they open a new battlefield. … . I worry that this will lead into a defocus internally for Microsoft, and then we have to suffer because we are working with their products."

A few have also noted that Microsoft’s previous problems with antitrust authorities had stemmed, amongst other issues, from how it competed unfairly with its partners, not just business rivals. It has the unfair advantage – it owns the software IP, and its Surface team will get first dibs on the code.

But did it have a choice, really? This is the sexy new sandbox. You have to play in it according to Apple’s rules, or get out. Or no matter what you do on other fronts, you’d be seen as being short on innovation.

Even Gizmodo noted that Microsoft has been very innovative, yet has been upstaged by its two tech rivals. “There's Windows 8, Xbox Live, Skydrive, Kinect, SmartGlass; even Hotmail stepped up its game,” it reported.

This is Microsoft’s own burning platform – remember that wake-up-call memo from then recently-appointed Nokia CEO Stephen Elop (who had joined the former global mobile phone leader from Microsoft)?

There was another meme floating around the Internet at around the same time I joined Microsoft. It was a little post that said, and I paraphrase here, “Welcome to the new world. Apple is ruthless, Google is a monopoly and Microsoft is the underdog.”

This may hold true for the next few years, but whatever it is, the PC industry is never going to be the same again. 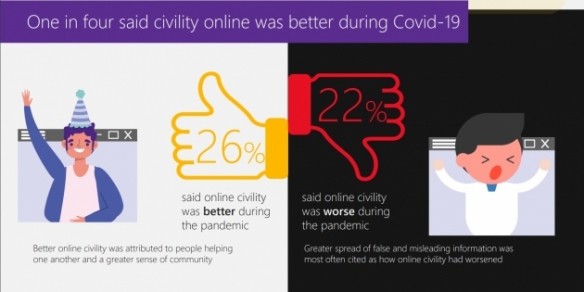