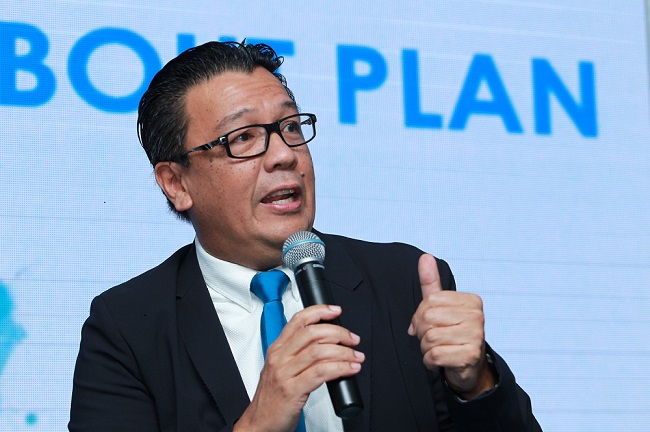 THE past three years have been a rollercoaster ride for Celcom Axiata Bhd – after having captured the lion’s share of Malaysia’s mobile market, it suffered the pain of losing most of these gains just a few quarters later.

READ ALSO: Maxis Q1 2016 profits marginally up, thanks to postpaid

One reason it lost momentum was its so-called IT transformation plan, which was ironically aimed at helping Celcom roll out products more quickly and better respond to customer needs.

The hiccups it experienced with the IT transformation programme saw many of its vendors losing confidence in Celcom, as some of the packages and plans took longer than expected to be activated.

“We are changing the way we work,” said chief executive officer Shazalli Ramly (pic above).

“That’s why it will take a while for us to come back,” he said at the launch of the Celcom First Platinum plan in Kuala Lumpur on April 21 (see below).

This includes changing the way Celcom looks at growing its average revenue per user (ARPU).

“We now address consumer ARPU one by one, rather than with the mass approach we did before," he said.

This means looking at the individual customer’s needs, then figuring out how it can give and extract more value out of that consumer.

A few months ago, Celcom launched a postpaid plan that shook the market. For just RM80 (about US$21 at current rates), you could get 10GB of data, and unlimited voice calls and text.

In contrast, Maxis’ MaxisONE plan gives customers 3GB of data, and unlimited voice and text for RM128 (US$33) a month. It recently upgraded the plan with an additional 5GB of data.

Shazalli said that during Celcom’s one- to two-year ‘cooling off’ period, when it lost its momentum, the company took the time to ensure that it had the infrastructure and capability to properly address the data business.

He also argued that mobile operators can expect to face pressure on their margins as they become increasingly data-centric.

“You have to take a slightly different shape and form managing your core business when you deal with cost. We have a strong focus on cost management,” he said.

Among the initiatives Celcom has rolled out recently are ‘smart spending and cost savings’ programmes within the organisation, as well as initiatives that focus on understanding consumer needs.

“Today, I am very sure that with the Celcom First Blue, First Gold and First Platinum plans, we are going to be trending back,” Shazalli declared.

“I can safely say that if we do this well, we will be able to protect our margins and grow the business strongly with data.

“The Blue is back,” he added, referring to Celcom’s corporate colour.

Consumer interest seems to have been building up. According to Shazalli, before the Celcom First Gold plan was officially launched in early February, the company was registering 45 daily postpaid subscriber activations – that is, 45 customers were signing up for the plan daily.

“Today, we are doing about 3,000 postpaid activations daily,” he claimed.

According to one source, who declined to be named, on some days the company sees more than 4,000 postpaid activations. Meanwhile, the Celcom First Platinum plan that was launched on April 21 gives customers a total of 18GB of data – divided into 9GB on weekdays and 9GB on weekends – and unlimited voice calls and text messages for RM150 (US$39) a month.

It also gives customers an additional credit limit of RM1,000 (US$258) and additional time to settle their bills – 45 days now, instead of 30 days.

Customers will also be offered a series of ‘preferred numbers’ when they sign up.

Customers on this plan can also enjoy the Celcom Home Broadband plan at a 50% discount. Without the discount, the fee is RM145 US$38) a month for a 10Mbps package.

This is just the beginning, Celcom said, as it plans to introduce additional services. For a start, it will offer customers higher bandwidth for its home broadband packages.

It also plans to introduce dual-SIM packages so that customers can share their data quota with others.