THERE is an online puzzle video game about folding protein structures, called Foldit.

The game is part of an experimental research project, and was developed by the University of Washington's Centre for Game Science in collaboration with its Department of Biochemistry.

In three weeks, Foldit gamers solved research puzzles that had baffled scientists for years, using their home computers and collaborating in the cloud via broadband connectivity.

This is just one example of how the growing ubiquity of cameras, sensors and networks offering increasingly accurate representations of the physical in cyberspace are enabling us to better understand and predict what happens in the real world.

Connecting the world represents the most direct route to unleash potential from countries, businesses, individuals, and more. 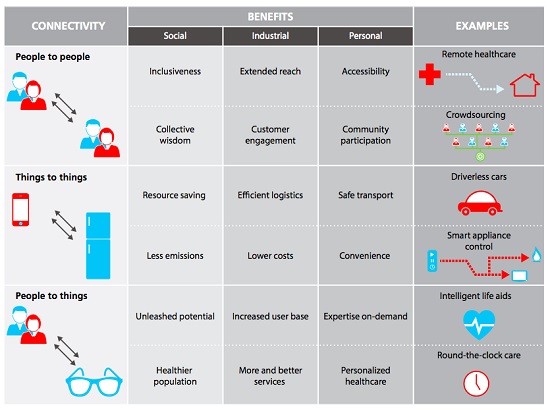 By 2025, Huawei predicts that there will be 100 billion connections and eight billion smartphone subscriptions, spread across some six-and-a-half billion people and tens of billions of devices.

Approximately 90% of those connections will come from intelligent sensors.

Connectivity will soon become as important as air and water, but the question remains: How do we strive for universal connectivity in a proactive fashion?

Information and Communications Technology (ICT) networks are now vital to the competitiveness and overall well-being of any country or business, but will also bear the burdens of more – more devices, more content, and more uses.

As resources bear unsustainable strain under the pressures of more, progressive moves in ensuring stable and ubiquitous connectivity will become all the more critical.

But where does the world stand now on the connectivity scale?

The state of connectivity

Huawei, with its mission to help build a ‘Better Connected World,’ released its Global Connectivity Index (GCI), which evaluates both countries and industries on the state of connectivity and ICT investment.

A quantitative ranking of 25 countries that account for 68% of global gross domestic product was conducted. It encompasses 16 indicators comprising two variables – current connectivity and growth momentum.

The GCI study found that country connectivity correlates with gross domestic product (GDP), with Huawei's analysis of 16 indices showing that for each GCI percentage point increase, the GDP per capital increases by 1.4% to 1.9%; relatively higher for emerging countries.

Germany took the top spot, thanks to its strong ranking in current connectivity (third among all countries ranked) and relatively high growth momentum (second among developed countries), but the real surprises on the leaderboard are Chile (fourth overall) and Kenya (first in growth momentum).

The other surprises were South Korea and Japan, two countries renowned for their ICT leadership and capabilities, ranking fifth and sixth, respectively.

The industry index assesses ICT investment and usage in 10 different industries in terms of current investment, planned investment, and effects on the bottomline, across areas such as business efficiency, innovation, and customer engagement.

Financial services scored the highest overall on the industry index, with education, oil and gas, and the logistics industries close behind. Nine out of 10 business leaders see ICT investment as critical to their business, yet fewer than half of believe their organisation’s current use of ICT is state of the art.

Huawei forecasts that by 2020, global ICT spending will increase to approximately US$5 trillion. Today, technologies based on connectivity remain significant as a support system, but this traditional role is giving way as ICT becomes increasingly integrated with production systems, driving value creation.

But how does an organisation spark digital reformation and become transformative in the way it approaches the investment and deployment of ICT? 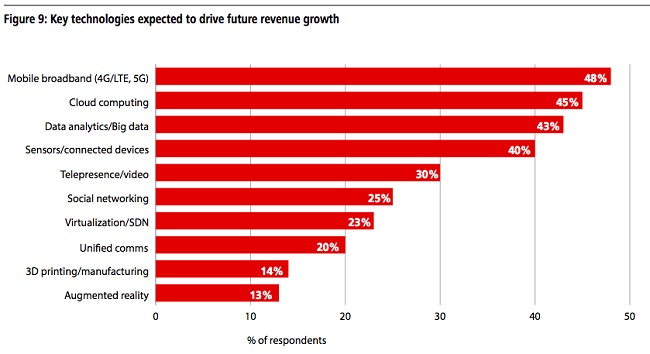 The first step is to carry out digital reformation of their infrastructure and business models to disrupt new industries, or to maintain a competitive advantage.

To achieve it, and turn a little profit in the process, business leaders must make ICT a strategic priority, embrace innovation, and seek to deliver inspired experiences.

In 2025, the ICT infrastructure will be producing some 176 zettabytes of data per year. This deluge of data will pose huge challenges for the networks that carry it, and great opportunities for those who can harness it.

Cloud computing is now the single most important ICT resource, enabling businesses and Internet service providers to better deliver their services through economies of scale, while reducing cost through centralised infrastructure (click infographic to enlarge).

5G (Fifth Generation) networks will support thousand-fold gains in capacity, at least 100 billion connected devices, and a 10Gbps user experience – all with a latency of less than one millisecond.

With the adoption of Software-Defined Networking (SDN)/ Network Functions Virtualisation (NFV), an enterprise IT system can be deployed in as little as three minutes, and telecom network utilisation can double by 80%.

The Internet of Things is making everything smart, from trucks to toothbrushes. This will mean a new era of automation, efficiency, logistics, and feedback, which will greatly benefit businesses and consumers.

Huawei’s vision sees a better connected world floating on an ocean of data, requiring a pipe of unfathomable capacity and reach that can keep both the high-volume and low-volume data flowing timely and properly.

These technology breakthroughs of today and tomorrow are the tools that will prove the difference between harvesting the waves and treading water.

Huawei is committed to building a better-connected world because of the possibilities such connections promise.

But as a ‘pipe-builder’ in the value chain of this endeavour, buy-in from three key groups is crucial to the success of this vision.

In addition to the business community embracing digital reformation, governments and regulators must set clear connectivity targets and lower the financial and regulatory barriers to ICT access.

And ICT and telecommunications leaders must work to make the online experience more compelling to those who presently lack connection.

Huawei is calling on lawmakers, trendsetters, visionaries, innovators and standardisers to come together and help give this world meaning, order and beauty.

And with these stakeholders on board and committed to making it happen, Huawei is intent on making it possible.