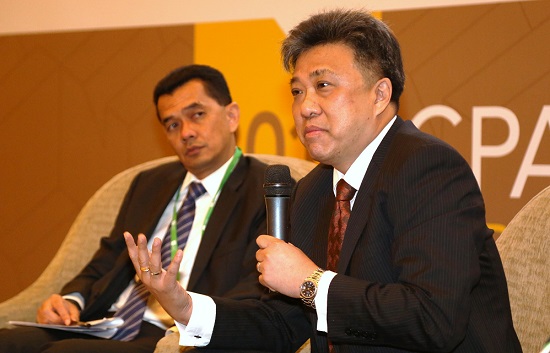 FOR those thinking there is a pot of gold to be made in the online news sector, consider this stark admission from Wong Chun Wai, group managing director and chief executive editor of The Star Media Group.

“We are really struggling to monetise our news portal.” Wong said, pointing out that The Star Online is enjoying traffic at an all-time high.

He also said The Star Online is the biggest and most profitable online news site in the country, with US$6.3 million (RM20 million) revenue a year.

That revenue however is just a “drop in the ocean for The Star,” he added, referring to the English daily that the group publishes. The group recorded US$152 million (RM486 million) in revenue for 1H2014 with its print and digital arms contributing a combined US$60.6 million (RM193.5 million) and being the biggest contributor to topline.

Speaking at a panel session on ‘The evolving media landscape’ at CPA Australia’s annual congress, Wong claimed that no other online site comes close to The Star Online in terms of revenue.

Sharing the stage with Malaysiakini chief executive officer Premesh Chandran, Wong was generous in his assessment of the former’s independent news portal, describing it as “standing way above other news portals” in terms of its content quality.

Wong even admonished those who shared their passwords to bypass Malaysiakini’s subscription-only content, calling it "a terrible thing to do".

Meanwhile, Premesh said that Malaysiakini had to compete with global players for advertising revenue, citing the likes of Google, Facebook, MSN and Yahoo.

Offering his perspectives on this, Amrin Awaluddin, group managing director at Media Prima Bhd, said that “readers are no more aroused by the smell of morning newsprint.”

This is part of readers’ changing social behaviour, especially Generation Y, now comfortable reading news from 4in screens and admonishing their elders for reading newsprint which kills trees, he argued.

An even bigger change than social behaviour is the instantaneous world we live in, with readers wanting to know immediately if something is happening.

“There is no such thing as an appointment with your TV or reading the newspaper in the morning. People want to consume the news instantly, where and when they want it,” Amrin said.

But the biggest change that is upon the industry is in the way advertising is going to be sold, and in the positioning of stories.

“This will change tremendously,” predicts Wong. And it is down to the use of big data by media companies like The Star.

Explaining that in the past, it was editors who decided on how an article was to be played out in the newspaper, with content having gone online, “we can now track in real time how our articles are doing. Almost like a stock exchange,” he said.

That’s just half the picture because Wong said that the manner of selling advertisements will change too. “If in the past we set a price for an online advertisement (ad) based on the position of the ad and length of the contract, and then stuck to it, with the monitoring tools we have today, why can’t I then sell you ads for a particular page and space based on the popularity of the article on that page?” he lamented.

And because they are selling a space for a hot story, advertisers will have to pay a premium for the spot with models such as real-time bidding (RTB) or retargeted ads.

“That is where the big impact of data has been,” said Premesh (pic), concerned that with this method of displaying ads, “you can reach any audience at the lowest rate,” with CPM (cost per thousand impressions) currently at between RM1.50 and RM3.

Not sure how to deal with this new threat, he admitted that the media has to somehow come up with a solution.

Meanwhile, Wong said he also wants to see a solution to the inability of established media measurement companies like Nielsen in keeping pace with the changes in how content, not just reading, has changed.

People do not consume radio and TV in the traditional manner anymore. You can consume both from your desktop and mobile, yet this is not captured. Describing the situation as shocking, Wong wanted to see something done to correct this.