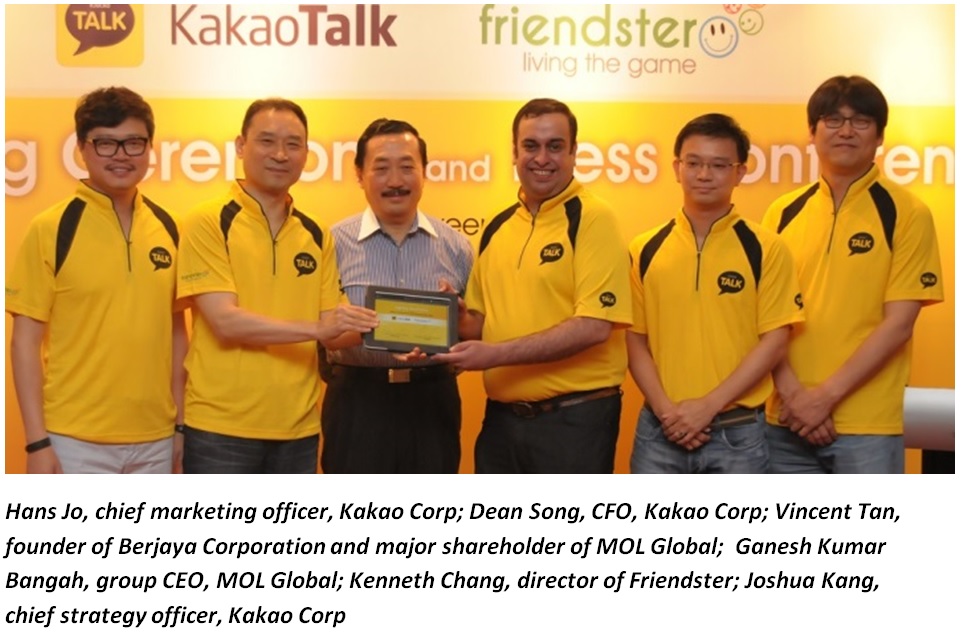 The partnership will cover Kakao’s KakaoTalk and KakaoStory mobile application services including businesses related to these applications, which include mobile game channeling, gifting and digital items store.

Friendster shall incorporate a new wholly owned subsidiary, Kakao Malaysia Sdn Bhd, to undertake the operations of the Kakao platform in Malaysia. The new company will be responsible for marketing and promoting the platform, sourcing local content and game applications for the platform, and procuring advertisers for Kakao’s mobile applications in Malaysia.

He noted that market research firm IDC has reported that the Malaysian smartphone market is expected to be worth around US$3 billion in 2016.

“Kakao Malaysia will also ride on MOL’s leadership position in the online games payment market in Malaysia where MOL has an estimated 70% market share,” Ganesh said.

“As smartphone penetration increases in Malaysia, mobile gaming will become more prevalent and this will allow online games to reach the masses, (and in turn allow) local content developers and intellectual property owners to generate a new revenue source from the Kakao platform,” he added.

Earlier in his speech, Ganesh said that more than 50% of its Malaysian users access Friendster over mobile phones.

“Friendster WiFi is the biggest free WiFi network in Malaysia in terms of user base and has an average of 1,500,000 users a month – our investment in KakaoTalk Malaysia will not only leverage on these assets but also generate stickiness and monetise these assets using the KakaoTalk product,” he said.

Ganesh said there are over 40 online game publishers in Malaysia, who generate an estimated RM300 million revenue a year, out of which 70% goes through the MOLPoints payment system.

KakaoTalk claims to currently have more than 94 million users around the world, making it one of the world’s largest cross-platform mobile group-messaging applications for iOS, Android, Windows Phone, BlackBerry and Bada devices in the world.

On a daily basis, the popular mobile chat app draws as many as 5.2 billion messages on a daily basis, in a form of free calls, texts, photos, videos, contacts, information and event schedules.

The mobile social platform claims to offer more than a mobile chat application as it covers a wide range of content and services including business marketing, commerce, games, digital content, and fashion.

A total of 142 games have been introduced to Kakao’s game platform, accumulating up to more than 268 million users across all its games as of May, 2013. Kakao and ‘for Kakao’ applications currently take up the majority of the top 10 grossing applications on the App Store and Google Play in Korea.

Kakao Corp chief financial officer Dean Song said that Malaysia, with its explosive growth in smartphone use and penetration, is a country of immense growth potential for the mobile industry.

“We expect to see fast growth for KakaoTalk and services in Malaysia, following our strategic partnership with Friendster, the most popular social network service in South-East Asia.

“Kakao has witnessed explosive growth of new markets and opportunities open up when ‘mobile’ and ‘social platform’ were combined with ‘game,’ ‘commerce,’ and other such industries.

“Leveraging on Kakao’s accumulated know-hows and experience in the mobile platform business, Kakao will join hands with Friendster to open up new opportunities and possibilities in Malaysia,” Song said.

The exclusive partnership between Friendster and Kakao Corp was signed by Ganesh and Song, and witnessed by MOL Global major shareholder Vincent Tan.

MOL enters Turkey with stake in Game Sultan and PaytoGo