NEWLY-established Shopee Mobile Malaysia Sdn Bhd, a subsidiary of consumer Internet platform provider Garena Online, believes it has what it takes to be the among the top consumer-to-consumer (C2C) e-commerce players over the next five years.

“With the right amount of funding, with the right product … there is a good chance for us to emerge winners,” Shopee regional managing director Ian Ho (pic above) told Digital News Asia (DNA) in Kuala Lumpur recently.

He however did not reveal how much is Garena is investing on the Shopee venture in Malaysia.

Shopee has been present in Indonesia, Malaysia, the Philippines, Singapore, Taiwan, Thailand and Vietnam since June, but only recently had its official launch, kicking off in Singapore first.

At that launch, chief executive officer Chris Feng told DNA that currently, Shopee is being funded by Garena and it was not thinking about getting external funding yet.

The Malaysian market presents an interesting challenge for the startup. Currently, the C2C space here comprises incumbents like Mudah.my and Lelong.com.my, as well as new players like Syoknya.my and secondhand.my.

These are basically portals consumers would go to if they wish to purchase used items such as electronic gadgets, fashion-related goods, and others.

Shopee, on the other hand, operates its online marketplace not via a portal but only through an app that is currently available for the Android and iOS platforms.

While the C2C space in Malaysia seems crowded, Shopee Malaysia’s Ho believes there is still room for his company to make an impact and differentiate itself.

“There are a few ways [in which] we are different compared with the other players. The first is that we have a robust payment solution that includes iPay, credit cards, and bank transfers.

“Second, when a buyer purchases something from our platform, the money is with us, and we will only release the money and give it to the seller when the buyer has confirmed that he or she has received the item and is happy with it,” he added. With money being released to the seller only upon the buyer’s satisfaction, the company believes this can help protect buyers from fraud.

However, what happens when the seller sends an item in good condition but the buyer is still unhappy?

“This is where we let our dispute team handle the case. The team acts like a judge and will listen to both side of the story and will try its best to find a win-win solution,” said Ho.

For now, the number of complaints and dispute cases are low, he claimed, which he attributed to another Shopee feature: Its in-app chat function (pic above).

This allows both sellers and buyers to communicate with each other without disclosing phone numbers.

“Our users find the in-app chat function very useful. Buyers can find out more about the product from sellers themselves.

“I think this is also why there is a low number of disputes between buyers and sellers,” Ho declared.

Where the action is

Currently, Shopee has more than 200,000 users from Malaysia on board. While Ho did not provide an exact figure, he did say that there were more than 100,000 Android downloads and approximately 100,000 iOS downloads.

He said that he hopes with the strategy in place, Shopee would be able to grow the number to one million over the next 12 months.

“I think it is possible to achieve that. It is within reach. Let’s not forget, we are only a few months old,” he said.

To hit the one-million mark, Ho said that the company would need to understand sellers and buyers better – and the best way to achieve that was to be on the ground.

Over the next few quarters, he and his team will be going to universities and bazaars to create greater awareness.

“For our business, it is very important to have a ground presence. We need to go door-to-door, bazaar-to-bazaar, university-to-university and tell the target audience of our solution.

“We will go to universities and tell the students that they can use Shopee to sell their pre-loved items for extra pocket money.

“We will set up stalls in bazaars too, and tell the sellers there about our product and how it can complement their existing business.

“It is more effective than flashing ads on Facebook,” Ho claimed.

For now, Shopee does not take a commission on purchases or charge any sort of fee for listing.

“The plan for the next 12 months is to ramp up the user base. We are not looking at monetisation – that comes much later,” he said.

Ho (pic) is aware that the advantages Shopee has today can be easily erased the next day, as deep- pocketed rivals like Mudah.my can easily catch up in terms of features by implementing in-app chat functions, for example.

“We just have to execute faster and execute better. There’s no secret recipe. We have to plan ahead and do the best as we can,” he said.

He declared that the Shopee app people are experiencing today is just “the tip of the iceberg” and more features would be unveiled in the future.

“What people are seeing today is version 1 or 2 of our product, which will continuously evolve and improve,” he said.

Ho also said that Shopee will not be competing head-on against Mudah.my on all verticals and product ranges.

“For now, we are not looking at the automotive or property space. We are mainly focused on fashion items, electronic products and others,” he said.

Mudah.my to fend off rivals with ‘one simple approach’

Findit aiming for No 1 spot in online marketplaces 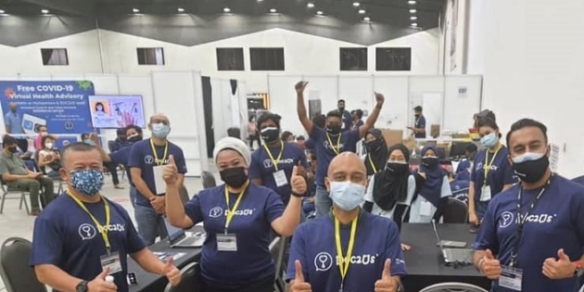