THE Indonesian startup ecosystem has been growing throughout 2018 with the big players successfully conquering other markets in Southeast Asia. The year also saw the rise of the fintech with more players entering the arena and making it a highlight in the local ecosystem.

With all these going on, I was hard-pressed to choose just five. Here they are, in no particular order.

Go-Jek heads to Vietnam with Go-Viet Go-Jek’s expansion to Vietnam and Singapore in 2018, drew all eyes to the Indonesia-based unicorn. The fact that it will take on the other titan in the field, Grab in Singapore has greatly added to the interest.

All in all consumers are likely to be the beneficiaries in this clash of the titans and Go-Jek enters 2019 with new markets to play in.

Startups urged to work towards having a global impact Speaking to Gobi-Agung Fund venture partner Arya Masagung (pic, above) opened my eyes to what it takes for local startups to grow their businesses abroad.

He explained that when Go-Jek, Traveloka, and other local startups expand abroad or became international players, their activities impact the region as a whole.

He pointed out that it is important for local startups to have traction in a designated country before they officially set up operations.

“It’s best to have some form of traction in the designated country first, then you start to raise funds. It does not have to be fully operational, but you need some form of a presence to show that you understand enough of the local market. And the only thing you need now is capital to boost your acceleration.”

OYO set to make its mark in Indonesia India-based unicorn OYO, a hospitality company entered Indonesia through OYO Hotels which offers hospitality experiences to hotel owners, property investors, and travellers through its use of technology.

The 24-year-old founder Ritesh Agarwal is very passionate about his goal to digitalise and revive budget hotels and their owners.

He also aims to recruit more than 60,000 employees in various regions to strengthen the hotel sector in Indonesia by 2020. It will be interesting to keep an eye on OYO to see how their ambitions pan out.

Fintech ruled the roost throughout 2018, only to find its halo slipping at the year ended. The Jakarta Legal Aid Institute (LBH Jakarta) filed a complaint against 89 fintech players on allegations of unethical debt collecting methods, which was reported by 1,330 victims (as of Nov 25, 2018), to Indonesian Financial Services Authority (OJK).

Among the 89 implicated fintech players, 25 were registered with OJK. The OJK has yet to take any action as the report was based on an initial statistics report published by LBH Jakarta.

LBH Jakarta, for their part, was unable to share the full names of the 25 registered fintech companies as they had to follow legal procedures and give these companies a chance to comply with the correct processes. If they fail to do so, their names will be made public.

Indonesian Financial Services Authority (OJK) director of Regulation, Licensing and Supervision of Financial Technology Hendrikus Passagi said that LBH Jakarta had not submitted a complete legal report to the authorities at press time.

“So, their efforts are actually nothing more than merely polemic and building unhealthy opinions, and may be ridden by other interests.”

Let’s see if the fintech players will cooperate, and what action the regulators will take to settle this issue.

Getting enterprises up to speed on blockchain 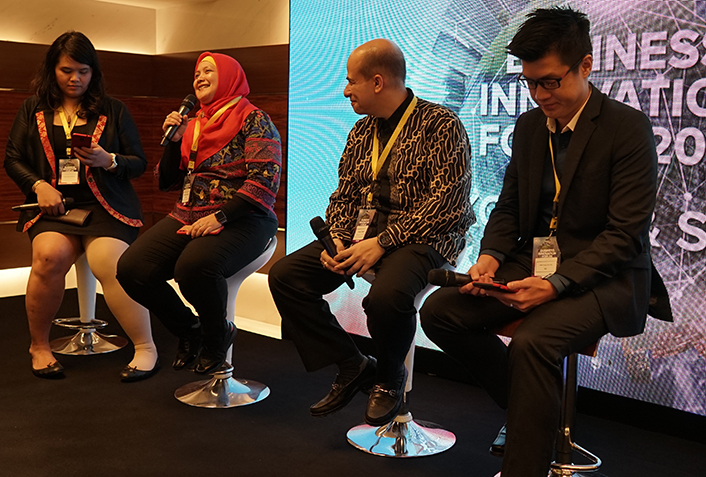 In 2018, the buzz was all about blockchain technology and the benefits of implementing it to boost business and validate of data.

But, there was still confusion around the technology as businesses contemplated which area they should apply blockchain in.

IDC Asia Pacific senior market analyst for blockchain and security research Jeff Xie explained that only 20% to 30% of an organisation’s system are needed for blockchain implementation.

At this early stage of blockchain, Xie advised companies not to implement the technology on its own due to the lack of understanding and right resources.

“Many blockchain-based companies out there are offering working models which companies can adopt and tailor to their needs.”