15 June 2021 will mark my one-year tenure as Chairman of the Malaysia Digital Economy Corporation (MDEC). It has been 12 months of deliberate actions as the MDEC senior management and I embarked on our ‘Reinvent’ mission to ensure MDEC’s relevance in today’s social and economic landscape, as we lead our nation’s digital transformation and Malaysia 5.0 agenda. It is a journey towards developing a nation that is deeply integrated with technology, providing equitable digital opportunities to the people and businesses.

People are the heart of any organisation and I am truly blessed that MDEC is staffed with talent who possess not only incredible work ethic but also the wherewithal to embark on a journey of change and running the race together. The Reinvent mission has been crucial as we holistically transform ourselves to lead the nation’s digital leap into 4IR and drive high impact outcomes as envisaged in the MyDigital blueprint.

We have chosen the ‘logical path’, taking us through four phases over the past twelve months. Allow me to share the journey with you.

Phase One which took place from June 2020 to September 2020, started with the big picture, where the objective was to understand the existing practices, culture and sentiments of MDEC as well as identifying the stumbling blocks that prevented MDEC from realising its full potential in implementing its mandate, and identifying factors that should be raised well above the industry’s standard.

Time and effort were invested to conduct qualitative and quantitative studies to identify improvement opportunities in leading the digital economy whilst leveraging on opportunities and challenges as well as identifying the gaps that required further concrete and strategic actions to chart our future.

Stakeholder engagement was another key agenda under Phase 1 where I reached out to both MDEC’s team members as well as external parties such as government officials and foreign ambassadors as well as strategic groups within the targeted industries, gaining invaluable insights on how we can, together, place Malaysia truly as the Heart of Digital ASEAN.

A total of 623 emails were received from every strata of society on suggestions to strengthen the role of MDEC and I had attended to these emails. From the myriad of interactions, one thing was clear – transformation was needed and it was needed, fast.

Together with our CEO, Surina Shukri and the Senior Leadership Team (in which the name was changed to Management Operating Council (MOC) in February 2021), we moved into Phase Two of the “Reinvent” mission, which commenced in September 2020, with an aim to set the foundation for transformation of MDEC, from three main aspects - People, Process and Structure of MDEC. The stage was set to clearly communicate the refreshed tone – Transformation was necessary and Changes were imminent.

In line with the overriding objective to transform and strengthen the overall governance and management model of MDEC whilst bolstering the existing culture and operations, we sought to recalibrate and broaden the Board of Directors with the appointment of industry trailblazers entrusted to guide MDEC through the complex and fluid concept of digital economy as well as appointment of experienced technocrats to our senior leadership line-up, to spearhead the management of MDEC.

The second major initiative was to conduct a holistic governance review aided by relevant professional entities, who were familiar with Governance transformation in ensuring that the impact and outcome of every initiative is clear and that public funds are properly accounted for with greater responsibility and transparency.

The results of the review highlighted improvement areas in both governance and controls in key areas of MDEC that required prompt action stemming from oversight of the role of the Board, the Board Committees, Steering Committees and Special Committees established for specific purposes (such as Grant Management) to the organisation structure where issues such as over empowering certain functions leading to lack of independence and “silo mentality” amongst team members were noted, and to a certain extent, strategic decisions were not endorsed by the Board.

As a result, a restructuring exercise was conducted with the establishment of five distinct pillars, two new dedicated Board Committees overseeing governance and technology related matters and Management Operation Council to streamline the approval and reporting process whilst providing the Board with visibility on key financial and operational matters.

Phase Two also saw the introduction of the Malaysia 5.0 agenda, curated based on Japan’s Society 5.0 model. Under this agenda, we aim to transform Malaysia into a nation that is deeply integrated with technology, governed by inclusive and equitable eco-vironmental principles and practices.

Malaysia 5.0 will encourage growth and progress for all, enable deep integration of 4IR technologies at every level of society and seek to transform and reform the national education system to address the demands of the digital future.

Arising from the observations noted from the holistic Governance review, we realised that MDEC carried an inherent risk of the perception that the digital grant provided by Government of Malaysia was not fairly distributed to those who were really qualified and in need.

The process of due diligence, independent checking, evaluation and approval had to be tightened to enhance public trust and honour the faith that is placed in MDEC. Unfortunately, there were cases where grants had been abused due to internal weakness in the evaluation and approval process, leading to a number of investigations carried out.

Where necessary, the grant was immediately stopped and remediating controls were put in place to prevent similar cases from happening again in the future. Recouping measures to recover the funds were actioned upon; including reporting to the relevant authority and taking legal actions.

With the gaps identified and roadmap towards improvement determined, we moved into Phase Three, in January up to March of 2021.

One of the key achievements under Phase Three was the signing of the MACC Corruption-Free Pledge by all employees of MDEC, demonstrating the organisation’s strong commitment towards a transparent and honest regime, further enhanced with the onboarding of a Certified Integrity Officer from MACC.

MDEC witnessed the first tangible improvement with the implementation of Discretionary Authority Limits (DAL), a total overhaul of the previous Limit of Authority (LOA). The DAL reset the overarching framework for approval in MDEC by clearly defining the hierarchy and reporting line, promulgating clear accountability and taking away the authority previously given to certain key designation leading to systemic control breakdown, pivoting the decision making back to fundamental body, the Board.

One of the salient features of this DAL was to ensure that there were reporting lines to the division’s Head, CEO, MOC and Board of Directors, eliminating the issue of “silos” within MDEC. To institutionalise the DAL, townhall sessions and roadshows were conducted, where the CEO and I both embarked on an internal meet-and-engage with all 467 amazing team members of MDEC to ensure they are properly briefed as well as to gather their feedback and buy-in to what we want to achieve – an agency institutionalised with the highest level of professionalism, radical transparency, integrity and performance.

The DAL was a ‘reconciliation exercise’ to ensure the Board is given due recognition in understanding, appraising and approving strategic, financial and operational activities until a period where the ‘silo mentality’ amongst the division had been institutionally abolished by the new DAL.

There were mainly two main actors in the approval process, the Board or the MOC (for RM500,000 and below). Some clusters did not welcome the new DAL as they were no longer given the empowerment to solely make decisions for MDEC, or the value of their approving authority had been reduced to minimal.

We are currently at Phase Four of our Reinvent mission, where now the focus is on executing our mandate to meet the objectives under MyDigital, ensuring the digital economy benefits the many.

To further streamline our strategy, four key thrusts have been identified: New skills, Adoption, Disruptors and Investments, in short, N.A.D.I. These will drive our core programmes for the rakyat, businesses and investments such as the #SayaDigital Movement, our overarching programme on digital outreach and development for citizens and businesses in Malaysia.

Further to our positioning of Malaysia, Heart of DIGITAL ASEAN (MHODA), we have announced the Digital Investment Office (DIO) with MIDA to further streamline and land quality investments. The Prime Minister, through the National Council of Digital Economy and 4IR (MED4IR), recently endorsed the National eCommerce Strategic Roadmap (NESR) 2.0, of which MDEC has been entrusted to lead the Project Management Office with the mandate to oversee its successful implementation.

Realising and making full use of 4IR technologies are also at the forefront of our initiatives. We are beginning to see promising development of this in our pilot project in the field of Agtech via our eLadang programme. Farmers involved are already reaping up to 20% increase in yield quality and quantity as well as income. We have embarked on our partnership with CIMB Islamic to support the farmers to implement IoT technology and reap the fruits of digitalisation. This is a first step in our collaboration with the Ministry of Agriculture and Food Industries in our bid to ensure our nation’s food security and sovereignty.

The pandemic has brought changes and challenges, some opine even ruin. But as Rumi, the 13th century Persian poet said; “Where there is ruin, there is hope for a treasure.” MDEC’s digital mandate has been brought into a sharp focus as a result of the global pandemic, requiring a paradigm shift in the digital economy and organisation wide changes to support it.

Whilst change is not the problem, it is the resistance to the change that is the problem. Thus, whilst MDEC acknowledges, accepts and adopts the need for this transformative journey, it is only with a fresh mindset, one that is open to experimenting, innovating and being agile while emphasising radical transparency and integrity, that the desired results can be achieved.

I am an eternal optimist and I embrace the mandate entrusted to MDEC to guide all Malaysians to the key of the treasure - digitalisation of our beloved Malaysia. 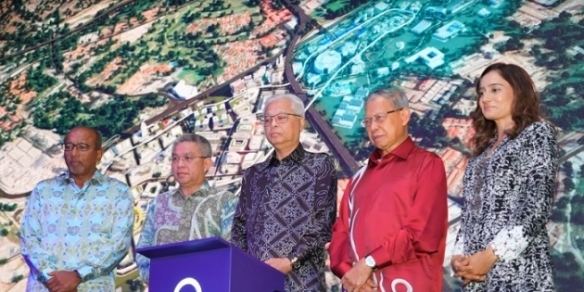