The e-commerce site will eventually carry all 150 middle- to higher-end global brands that MAP offers, such as Marks and Spencer, Nike, Tumi, Zara, Mango and Starbucks, but will start with 100 brands in categories such as fashion, sports, travel, kids, department store, and beauty.

“When we started 25 years ago as a brick-and-mortar company, there was no such thing as e-commerce,” said MAP group chief executive officer VP Sharma.

“Now shopping behaviour has changed, and brick-and-mortar retailers these days cannot isolate themselves from e-commerce,” he said at the official launch in Jakarta on Feb 18.

With the e-commerce site, MAP is aiming to become the leading omni-channel retailer in the country.

All products sold in MAP Emall will come directly from its physical stores, and not warehouses, which is where other e-commerce players usually store their inventory.

“The technology we have enables us to keep the inventory in our stores, and we now have option to sell it online too,” Sharma said.

This is one of the company’s competitive advantages, Sharma argued, stressing that MAP is not going to be an e-commerce player but an “omni-channel retailer.”

MAP owns the exclusive rights in Indonesia to the 150 global brands it carries, as well as exclusivity to most of these brands’ online rights too, which is something no other online retailer can match, he claimed.

Despite the launch of its e-commerce site, MAP made it clear that it would still rely on its brick-and-mortar stores as its main business line and revenue generator.

However, the economic slowdown in the past two years, the increase of import duties, and the weakening of the rupiah has caused the brick-and-mortar business landscape to suffer.

With economic uncertainty still looming, MAP needed to look to alternatives for growth, and e-commerce may just be the answer.

“MAP had problems with its inventory in 2014 and the first two quarters of 2015, that was the reason why we saw a lot of discount promotions in the last two years,” said Danareksa Sekuritas retail analyst Anindya Saraswati.

“Yet, since the e-commerce platform [soft-launched] late last year, its management’s efforts to move inventory around have proven to be effective, and that should improve profitability,” she told Digital News Asia (DNA) via email.

Anindya predicts that 2016 will be a better year for MAP, with net profit forecast to be back to the three-digit billion-rupiah range, and total revenue to increase by about 15%. 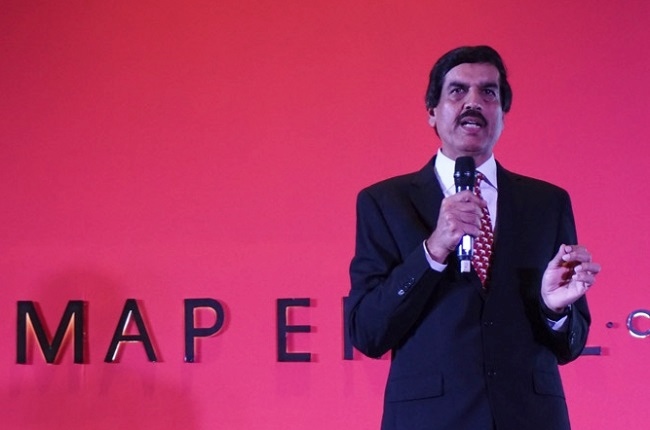 The e-commerce move is also about a wider market reach with a minimum investment.

“One of the advantages of going online is expanding market reach. Most of the brands we carry are mostly available in Jakarta and Surabaya only – MAP Emall will enable us to reach the second- and third-tier cities all around the country,” said Sharma (pic above).

He said that MAP has been looking at e-commerce since 2014, but took the time to prepare itself to better compete in this new sector, rather than “play fast but leave faster” as many e-commerce players do.

“We are now ready to take off – the e-commerce business will not be a separate business from our brick-and-mortar stores, but both will complement each other,” Sharma said, without disclosing the amount MAP invested to build its e-commerce platform.

At the sidelines of the launch, MAP group corporate secretary Fetty Kwartati told DNA that the company is targeting for its e-commerce venture to contribute 8% to 10% of total revenue within the next five years.

“Although the contribution from the e-commerce platform will remain relatively small for now, this new innovation will nonetheless help support the company’s growth in the future,” Anindya of Danareksa Sekuritas concurred. As the leading lifestyle retail company in Indonesia, growing from 40 stores in 1995 to more than 2,000 stores in 66 cities by 2015, going digital was a struggle for MAP.

“The process was not easy at all – the main struggle was convincing the company, a leading brick-and-mortar retailer, to now embrace technology to support the way it does business,” said its vice president of e-commerce and CRM (customer relationship management) Amit Keswani (pic above).

He said that much time was spent looking for the best technology architecture design that could work not only in a year, but even in five to 10 years from now.

In dealing with today’s customer, Amit said MAP realised that there has been a shift in shopping behaviour, led by the younger generation.

“After the soft launch of MAP Emall late last year, we saw that 65% of our traffic came via mobile – the trend is there.

“What we want to bring to the table is the legitimacy of MAP as a brand that people can trust,” he told DNA at the sidelines of the official launch event.