Huawei unveils a slew of products in Malaysia SHENZEN-based communications giant Huawei Technologies Co Ltd has launched new products, including its latest flagship smartphone the Huawei Mate 8, in Malaysia, even as it reported a strong global revenue growth in 2015.

“This is extremely good news for us. On top of that, we have a 44% [surge] in terms of smartphones sales. Huawei is now the world’s third largest smartphone maker,” he declared at the Mate 8 launch in Kuala Lumpur on March 8. “The Huawei Mate 8 marks our commitment not only to the premium segment, but also to each individual category of consumers, providing a premium touch, feel, look and experience,” he claimed.

The Mate 8 runs on the latest Kirin 950 octa-core chip processor, whose processing capability is 1.25 times faster than the Kirin 925.

According to Huawei, the Kirin 950 enables the Mate 8 to reach high performance levels and able to last more than two days on a full charge with “normal usage.”

The flagship device boasts of a 4000mAh battery and quick charging technology – able to charge up to 37%, the amount for a whole day’s usage, in just 30 minutes, claimed Huawei.

The Mate 8 will be available in local stores on March 11, starting from RM2,099 (US$510). Consumers can also purchase the smartphone from Huawei’s online partner Lazada and its own VMall.my from March 8 onwards. Huawei also launched the MediaPad M2 10.0 (pic above) and the gold edition of the Nexus 6P. Huawei has continued its collaboration with Google by launching Nexus 6P gold edition (pic above).

“This special edition of Nexus 6P offers a stylish option for people who are looking for a luxurious-looking device,” said Au. At the launch, Huawei also came up with something for the ladies – Jewel (pic) and Elegant smartwatches.

Both offer a softer and more feminine aesthetic compared to the original Huawei Watch, the company proclaimed.

The Elegant sports a rose-gold plated body while the Jewel has a rose-gold casing embedded with 68 Swarovski zirconia. 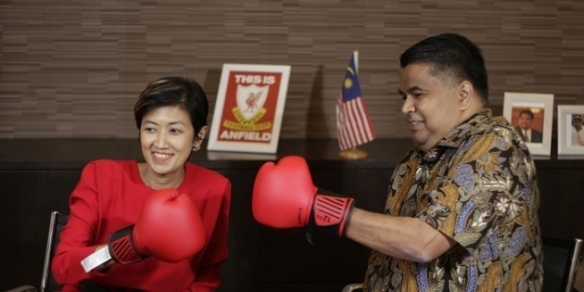